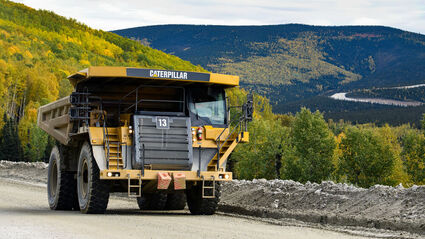 A truck hauling ore from the Gil-Sourdough satellite deposit to the Kinross Alaska processing facilities at Fort Knox.

With the official decision to move forward with development of the Manh Choh Mine in eastern Alaska, Kinross Gold Corp. has taken a large step forward toward executing its strategy to leverage the underutilized 14-million-metric-ton-per-year mill and tailings storage capacity at its Fort Knox Mine site north of Fairbanks to process higher-grade ore from projects within a roughly 300-mile radius of the Interior Alaska operation.

"At Manh Choh in Alaska, we completed a feasibility study ahead of schedule, and are proceeding with a project that we expect will add approximately 640,000 lower-cost gold ounces to our production profile over its life of mine in one of the world's best mining jurisdictions," Kinross Gold President J. Paul Rollinson announced in July.

The company's plan to truck high-grade ore mined from Manh Choh roughly 250 miles to Fort Knox for processing is a key component of the "Kinross Alaska" strategy introduced by the global gold miner in 2020.

The basic premise of this initiative is to enhance gold production at Fort Knox by supplementing the primarily heap leach-grade ore mined from the Fort Knox property with higher-grade mill feedstock from satellite deposits within an "economic radius around Fort Knox."

The grades of the deposits that could feed ore into this strategy are largely dependent on how far they are from the Kinross Alaska mill – the 0.8 grams per metric ton gold at Gil satellite deposit on the Fort Knox property is likely at the lower end and the 8 g/t gold being trucked 250 miles from Manh Choh is representative of grades required from deposits near the outer edge of the economic radius.

Breaking ground at the Gil deposit in the fall of 2021 really marked the start of the Kinross Alaska initiative.

Ore mined from these reserves is simply blasted, loaded, and trucked to the Kinross Alaska mill for processing.

By November 2021, the first gold bars with Gil gold were poured at Fort Knox.

"Mining the Gil deposit has been a long-time goal for Kinross. Seeing the first ore go into the mill is a very satisfying achievement for the Gil team," said Clint Connelly, project superintendent at Fort Knox.

Kinross expects the ore mined from the Gil satellite pits will contribute roughly 160,000 oz to Fort Knox' gold production over a two-year span that began with that first gold pour.

Eliminating the need for a mill, heap leach facility, tailings ponds, and other infrastructure, Gil Mine could be equated to a quarry.

The shrunken footprint, simpler permitting, and increased economics of Gil underscores the brilliance of the Kinross Alaska strategy and what it could mean for the future of gold mining across a large swath of the state.

This strategy paved the way for Manh Choh, the next satellite project to feed ore into the Kinross Alaska mill.

Being developed under a joint venture between Kinross (70%) and Contango ORE Inc. (30%), the Manh Choh Mine is expected to produce roughly 1 million gold-equivalent oz, which includes the value of both the gold and silver recovered over an initial 4.5 years of mining detailed in a 2022 feasibility study

With the supplemental feedstock from Manh Choh, the gold production at Fort Knox is expected to jump to 400,000 oz per year during the currently anticipated 4.5 years of mining at Manh Choh. 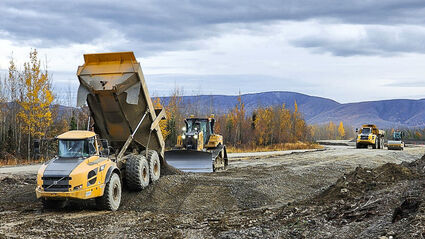 Crews upgrade an existing road on the Manh Choh property leased from the Eastern Interior Alaska Native Village of Tetlin.

The total preproduction capital needed to build the mine is estimated to be approximately $255 million. This includes the development and infrastructure at Manh Choh; modifications to the Fort Knox mill; a fleet of trucks to deliver the ore; and $40 million in contingency.

Based on the Manh Choh joint venture agreement, Kinross' share of this expense is expected to be roughly $190 million. CORE is responsible for the balance of expenditures needed to get to the first gold pour.

Given the positive economics detailed in a 2022 feasibility study, Kinross officially decided to move forward with development and the Peak Gold Joint Venture began the preliminary work, including camp refurbishments, in 2022 in preparation for the start of construction.

The first gold is expected to be poured from Manh Choh ore in the second half of 2024.