Assuming that everything they say about global warming is true, which may be a stretch, is it bad for Alaska miners? 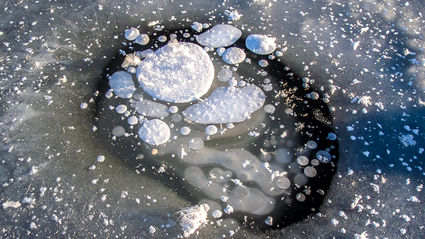 Microbes consume carbon from thawing permafrost, releasing methane that bubbles up in many Alaska lakes. When these lakes freeze the methane gets trapped as bubbles in the ice.

What brings this to mind is a recent article in the Washington Post about a lake a little north of Kotzebue which is bubbling methane. It is a lovely article complete with incredible photos and films of the area. The scientific study of this lake and other similar sources of methane has been on-going for some time – at least since 1999 at University of Alaska Fairbanks – and probably for decades before that.

According to the report "the total impact from thawing permafrost could be similar to adding a couple of large fossil-fuel-emitting economies - say, two more Germanys - to the planet. And that does not take into account the possibility of more lakes like Esieh, which appears to be a different phenomenon from thermokarst lakes, emitting gases faster."

I think that we have always known that bovine flatulence – and by extension caribou flatulence – is a major source of atmospheric methane. One estimate is that livestock originated about one-fifth of methane emissions from 2003 to 2011. To the extent that we want to worry about that greenhouse gas, I guess we can lay part of the blame at the feet of McDonald's as well as Lake Esieh.

My "so what", however, tends to be more focused on the rise of the sea level than greenhouse gas.

I have long thought that as the sea level rises people will be displaced from their homes and have to move up the hill. Since the sea level rise is about one centimeter per year, in a hundred years or so people who are living within three feet of the current sea level are likely to get their feet wet when they get out of bed in the morning.

Most of us probably won't live to be much older than 100. Except for the few super-centenarians among us (currently about 30 people in the United States), global warming is more likely to affect our progeny than ourselves. I am pretty sure that my kids, not to mention my grandchildren, will probably want to live somewhere outside the risk zone when it gets to that point.

Sea level rise is only a small part of the global warming crisis; however, it is the most telling. We have the tools to establish where the sea level has been over geologic time. We seem to know with a fair degree of certainty that the rate of sea-level rise during the Holocene epoch was once pretty steep (about 80 meters over about eight thousand years, the so-called "Holocene Transgression") and then, about seven thousand years ago, it leveled off and has only risen about four meters ever since.

While it probably cannot be contested that the earth has been warming steadily since about 1840, at least according to the United States Geological Survey, "the Earth should be proceeding toward another ice age [and it] is somewhat ironic that our contribution of greenhouse gases to the atmosphere may actually be helping to delay the next ice age from starting!" (Google the "Flandrian Transgression".)

For the nonce, receding glaciers in Alaska have at least one positive effect. I refer to the Herbert Glacier gold mining prospect north of Juneau. As Herbert Glacier recedes it exposes more prospective ground.

Whether it is more methane in the air, more gold in the ground, or more water beneath our feet, it is a certainty that the only way I can think of to reduce the anthropomorphic contribution of carbon dioxide into the atmosphere is to ask all our environmentalist friends to please stop exhaling.