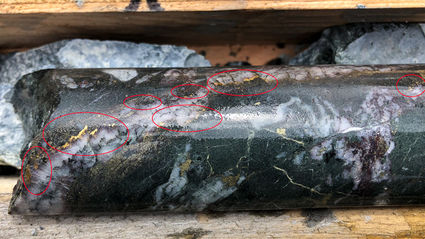 This visible gold was cut at 118 meters in FK 18-10, a hole drilled this year in the North Boundary zone on Aben Resources' Forrest Kerr property in B.C.'s Golden Triangle.

A drill program that got underway in June initially focus on the expansion of high-grade precious metal mineralization discovered at the Boundary North zone last summer. One such hole, FK17-04, cut 10 meters of 6.7 grams per metric ton gold, 6.4 g/t silver and 0.9 percent copper.

This year's drilling continues to turn up significant gold, silver and copper mineralization at North Boundary.

A one-meter interval of 331 g/t gold encountered at 118 meters in FK18-10 is about 230 meters north of a 326 g/t gold interval reported by Noranda in 1991. Aben said such high-grade intercepts at Forrest Kerr are generally found in narrow and discrete zones of moderate mineralization within a broad envelope of lower grade mineralization.

By late-August, Aben had completed the 5,000 meters originally slated for 2018. A C$4.28 million financing provided the company funds to continue drilling deeper into the year.

With the financial boost and vote of confidence from Sprott's investment, Aben is looking to explore the scope of its discoveries at Forrest Kerr. 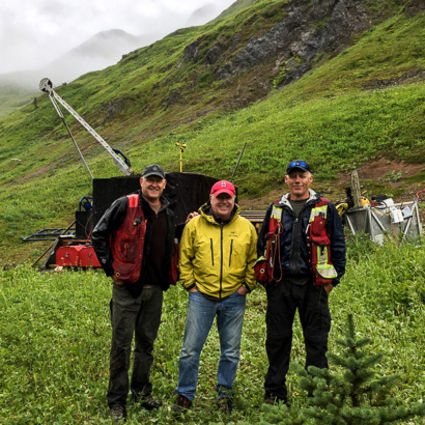 "We believe we have only just scratched the surface at the newly discovered North and South Boundary Zones," said Aben Resources President and CEO Jim Pettit.