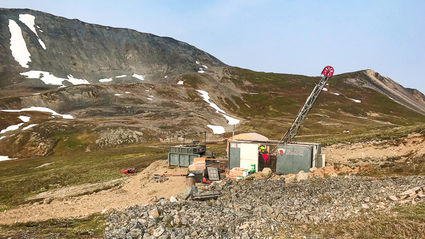 Millrock Resources Inc. is a project generating mineral exploration company with five projects in Alaska, three in British Columbia (transferred to Sojourn Exploration Inc.), 16 in Mexico and one in New Mexico.

Alaska Range, a property that hosts a copper-gold-silver skarn deposit and is highly prospective for copper-gold porphyries, is the most active project in Millrock's portfolio this year.

Because of the transaction, Millrock owns 9.76 percent of PolarX's issued and outstanding shares, holds a royalty on portions of the property and is entitled to milestone payments. Millrock is also managing exploration at Alaska Range.

This year's Alaska Range drill program focused on expanding the Zackly skarn deposit at depth and along strike, as well as vectoring toward deeper porphyry mineralization indicated by geophysics and observation. Encountering high-grade copper and gold mineralization up to 850 meters east and 100 meters below the deposit, this drill program was successful in demonstrating the potential for a much larger resource at Zackly.

While drills are turning at Alaska Range, Kinross Gold Corp. is funding a program to refine drill targets at Liberty Bell, a road-accessible project about 70 miles southwest of Fairbanks that is prospective for copper-gold porphyry and associated gold deposits.

To earn a 70 percent stake in Liberty Bell, Kinross has agreed to invest US$5 million in exploration over five years; pay US$145,000 in advanced royalty payments over the same timeframe; and pay an additional US$145,000 in management fees if Millrock manages the programs over the duration of the agreement. Further surface exploration is planned before drilling next year.

Millrock says its Goodpaster project, a group of seven claim blocks near and adjacent to the Pogo gold mine property, acquired this fall by Northern Star Resources Ltd., has attracted a lot of interest this year.

This spring, Sumitomo announced the discovery of Goodpaster, a new discovery north of the underground workings on the Pogo Mine property. The discovery hole at this prospect tapped 22.8 feet averaging 0.103 ounces per ton gold and the second cut 17.5 feet of 1.739 oz/t gold.

Millrock said two major gold mining and a junior exploration companies are interested in forming a partnership on its Goodpaster claims.

In a deal that closed in August, Millrock vended Todd Creek to Sojourn Exploration Inc. and modified the terms of the existing option agreements on the two other Golden Triangle properties so that Millrock became a 19.9 percent owner of Sojourn, and a royalty holder on the three northern British Columbia properties.

In a related transaction, Sojourn joined forces and properties with Seven Devils Exploration Ltd., a private mineral exploration company owned by a renowned exploration team with a track record of discoveries and a portfolio of exciting, early stage porphyry copper-gold projects in British Columbia.

As a major Sojourn shareholder, Millrock is expected to benefit from the company's success in British Columbia as it focuses on its large portfolio of exploration properties in Alaska, Mexico and New Mexico.

Editor's Note: This article was updated on Nov. 10, 2018 to reflect a shift in Millrock's portfolio, including the transfer of its BC properties to Sojourn Exploration.