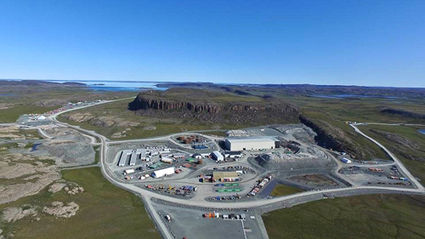 TMAC hopes to have the mill at it Hope Bay Mine running at its full 2,000 metric ton per day capacity and recovering 90 percent of the gold fed into the mill by the end of 2018.

Since reaching commercial production at the Doris Bay Mine in 2017, TMAC Resources Inc. has been working toward achieving the gold recoveries, ore throughput and gold output envisioned for this operation on its Hope Bay property in Nunavut.

Improvements made to the recovery circuits are obtaining this goal. In May, the mill at Hope Bay produced 9,850 ounces of gold from 28,900 metric tons of ore averaging 12.7 grams per ton gold. This is a 28 percent improvement over November 2017, the previous best month.

The next critical step was the integration of a second circuit to achieve overall plant capacity of 2,000 metric tons per day. The company began feeding low-grade material into the second circuit in mid-2018.

TMAC hopes to have the plant consistently meeting its 2,000 tpd capacity and recovering 90 percent of the gold fed into the mill by the end of 2018.

As mill throughput and recoveries improve, drilling continues to extend the zones of high-grade gold at Doris and across the wider Hope Bay property.

TMAC CEO Jason Neal said the high-grade gold tapped so far this year at Doris North Below the Dyke, referred to as Doris North BTD, and at Madrid North areas of Hope Bay demonstrate "TMAC's great potential to grow value with the drill-bit."

Doris North BTD has proven to be a significant expansion of high-grade gold at Hope Bay and TMAC has extended underground workings from Doris North into BTD.

In June, the Nunavut Impact Review Board recommended that TMAC's plans to develop Madrid-Boston – a project that would mine the Madrid North, Madrid South and Boston deposits at Hope Bay – be approved.

TMAC said the 50-mile- (80 kilometers) long Hope Bay property is underexplored and holds tremendous potential for further discoveries. The company, however, did not allocate a lot of resources towards regional exploration this year. Regional work included 2,000 meters of drilling and geological compilation and interpretation to develop targets for future exploration.