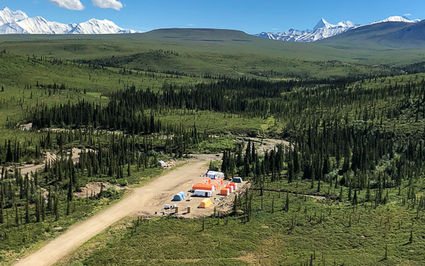 This camp served as headquarters for expanding the known high-grade zinc deposits on White Rock Minerals' Red Mountain project and reconnaissance exploration across the wider 35,300-acre property in Alaska.

While the two main deposits at Red Mountain – Dry Creek and West Tundra Flats, or WTF – had more than 120 historical holes drilled into them when White Rock acquired the property, a deposit had not been defined to modern reporting standards until last year, when the Aussie explorer had a calculation completed that met the standards of the Australian Joint Ore Reserves Committee.

White Rock got off to an early start to the Alaska exploration season by launching a drill campaign in May focused on upgrading and expanding the two known deposits and investigating Red Mountain's district potential.

Being outside of the current resource area at Dry Creek makes the high-grades even more exceptional and highlights the potential of enlarging both the grade and size of the deposit.

As drills expanded Dry Creek and WTF, crews carried out geophysical surveys, mapping and sampling across the VMS deposits to determine the best exploration tools to use to prioritize the 30 earlier staged prospects across the roughly 35,000-acre property.

This orientation work found that highly conductive anomalies were easily and economically identifiable with controlled-source audio-frequency magnetotellurics, or CSAMT, geophysics.

"The stark conductivity anomaly results seen and their coincidence with known massive sulfide mineralization gives White Rock a powerful exploration tool with which to identify new targets for drill testing, hopefully leading to resource expansion and the discovery of new deposits," said Gill.

Hunter was the first major discovery of the 2018 reconnaissance exploration program at Red Mountain.

While mapping and sampling an area about 5,200 meters southeast of Dry Creek, crews identified a two-foot massive sulfide outcrop rich in sphalerite (zinc mineralization) and galena (lead mineralization) at Hunter.

"There aren't many places in this world where you find outcropping zinc-rich massive sulfide (with lead, copper, silver and gold) and then promptly drill test that and get a positive response," said Gill.