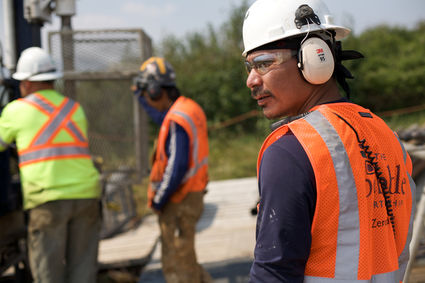 Alaska Peninsula Corp. hopes its shareholders can realize economic benefits from participating in an environmentally responsible mine at the Pebble copper-gold-molybdenum deposit in Southwest Alaska.

Northern Dynasty Minerals Ltd. announced that it had finalized a surface right of way agreement with Alaska Peninsula Corporation for use of that latter's lands for the construction and operation of transportation infrastructure associated with the Pebble copper-molybdenum-gold project. Alaska Peninsula Corporation is an Alaska Native village corporation with extensive land holdings proximal to the Pebble site and more than 900 shareholders, many of which live in the nearby villages of Newhalen and Kokhanok. The lands are included in the Pebble project description submitted to the US Army Corps of Engineers last year as part of the federal Environmental Impact Statement permitting process. The right of way agreement includes land south of Lake Iliamna that would link a port site on Cook Inlet to a ferry landing site west of the village of Kohkanok, as well as land north of Lake Iliamna that would link a ferry landing site west of the village of Newhalen to the site of the proposed Pebble mine. Under terms of the deal, operators at Pebble will make annual toll payments to Alaska Peninsula Corporation and pay other fees prior to and during project construction and operation. Alaska Peninsula Corporation will be granted "preferred contractor" status at Pebble, which provides a preferential opportunity to bid on Pebble-related contracts located on APC lands. The two parties also have agreed to negotiate a profit sharing agreement that will ensure Alaska Peninsula Corporation and its shareholders benefit directly from the profits generated by mining activity in the region.

Kinross Gold Corp. announced third quarter 2018 results from the Fort Knox mine near Fairbanks. The mine produced 51,984 ounces of gold at a cost of $1,015 per oz in the third quarter, versus 101,041 oz of gold at $641/oz in the year previous period. Production was lower year-over-year largely due to the impact of the pit wall slide in the first quarter, higher than average amount of rainfall in the area which affected geotechnical stability during the quarter, lower mill grades and fewer tons of ore processed on the heap leach pads. Cost of sales per ounce sold was higher compared with the previous quarter and prior year primarily due to the decline in mill grades and lower gold equivalent ounces sold. The mill treated 2,718,000 metric tons of ore grading 0.42 grams per metric ton gold, with a mill recovery of 81 percent. The heap leach saw additions of 3,262,000 tons of ore grading 0.19 g/t. Meanwhile at Gilmore, an expansion project immediately west of the current open-pit and associated infrastructure at Fort Knox, preparations are on schedule for major construction of the new heap leach pad. Drilling and expansion of the dewatering system was begun with start of stripping planned for mid-2019. Engineering is now essentially complete and initial production is on schedule for early 2020.

Freegold Ventures Limited reported preliminary results from the 2018 drilling program on its Shorty Creek copper-molybdenum-gold prospect near Livengood. A total of 1,148 meters was drilled in two holes during the fall program. Assays are pending. The drilling was designed to expand mineralization in the Hill 1835 prospect. The company also indicated that metallurgical work is underway aimed at both determining copper, silver and gold recoveries through locked cycle testing as well as evaluating the potential for a gravity circuit to recover the tungsten, which occurs as wolframite. Results from this metallurgical work are pending.

PolarX Limited announced additional drilling and exploration results from its Zackly prospect on its Alaska Range project. Hole ZX‐18021 intersected 20.2 meters grading 1.1 grams of gold per metric ton, 0.3 percent copper and 5.3 g/t silver starting at 8.2 meters down hole. This zone of mineralization is approximately 50 meters south of previous intercepted mineralization in hole ZX‐18020, which contained 55 meters at 2.8 g/t gold and 0.6 percent copper just 2.5 meters from surface; and ZX‐18024, which contained 46.7 meters at 3.1 g/t gold and 0.6 percent copper. The gold and copper oxide mineralization encountered in ZX‐18021 is associated with quartz and sericite veining and alteration, which is similar to observations from holes ZX-18020 and ZX-18024. The company also announced that recently completed airborne magnetic surveys indicate the mineralization trend continues 850 meters further east from the current resource. The airborne magnetic data also supports the potential for a porphyry mineralization system at Zackly with the main intrusive complex located 2,000 meters southeast of holes ZX-18020, ZX-18021 and ZX-18024. The company also announced assay results from infill soil and rock‐chip sampling at the Mars prospect. This work confirmed anomalous copper, gold, arsenic and molybdenum over a 2,000- by 1,500-meter-area. This anomaly directly coincides with an IP anomaly modelled at depths of 100‐150 meters below surface. These anomalies are associated with a cluster of magnetic highs interpreted to represent intrusive centers. Rock‐chip sampling has identified some exceptionally high‐grade outcrops of mineralized veins and breccias, with peak values of greater than 50 percent copper and 6.9 g/t gold. Copper (greater than 250 parts per million) and molybdenum (greater than 5 ppm) anomalism in soils occurs in the central 1,400- by 800-meter part of the multi‐element anomaly, within larger haloes of gold and arsenic anomalism. Gold (greater than 50 ppb) and arsenic (greater than 50 ppm) anomalism in soils covers a larger 2,000- by 1,500-meter area.

Trilogy Metals Inc. and funding partner South32 Ltd. announced additional drilling results from its Bornite deposit at its Upper Kobuk Mineral Projects, a business relationship owned and controlled by Trilogy and NANA Regional Corporation, Inc. Under an option agreement with Trilogy Metals, South32 has the right to form a 50-50 joint venture with respect to Trilogy's Alaskan assets including the Bornite deposit. The results from these three holes comprise approximately 2,889 meters from the recently completed 12 hole, 10,123-meter drill campaign. Two of the three drill holes contain copper mineralization and were designed as infill and extension holes to the 300- to 400-meter step-out holes drilled in 2017. Significant results include hole RC18-0248, which intersected five mineralized intervals, including one meter averaging 14.38 percent copper; 21.3 meters averaging 1.73 percent copper; 21 meters averaging 0.93 percent copper; 15.1 meters averaging 1.32 percent copper; and 4.9 meters averaging 2.97 percent copper. Hole RC18-0249 intersected one mineralized interval of 38.3 meters averaging 1.12 percent copper. Hole RC18-250 was drill to the northeast of current resources and did not intersect significant mineralization. The company indicated that total 2018 budget was approximately $10.8 million and that it intendeds to publish a revised resource estimate for Bornite in early 2019.

Coeur Mining Inc. announced preliminary third quarter 2018 production results from its Kensington Mine. The mine produced 26,809 ounces gold during the quarter, including pre-production gold contributed from the Jualin workings. Cash operating costs were $1,091 per ounce, a 9 percent improvement quarter-over-quarter. The operation milled 163,603 tons of ore grading 0.17 oz/t gold. Recovery was 90.4 percent for the quarter. Approximately 4,400 tons of ore came from the Jualin portion of the mine complex and contributed an estimated 2,100 oz of gold grading 0.48 oz/t to the quarter's production. Mining rates at Jualin are expected to climb throughout the fourth quarter, leading to higher overall production levels. The company is estimating full-year production of 115,000-120,000 oz of gold at a cash operating cost of $900-950 per oz.

Ucore Rare Metals Inc. announced its intention to exercise its option to purchase IBC Advanced Technologies Inc. in accordance with the terms previously agreed to by Ucore, IBC, and majority shareholders of IBC. The US$10 million purchase price is to be paid in either cash or shares of Ucore. In addition, 4 million units of Ucore, will be paid to IBC key persons, with each unit consisting of a common share and a 0.5 common share purchase warrant. Payments totaling US$2.9 million pursuant to previous agreements between Ucore and IBC must be completed prior to the closing of the purchase transaction. To date, Ucore has made payments totaling US$1.9 million against this amount.