Exploration poised to pay off 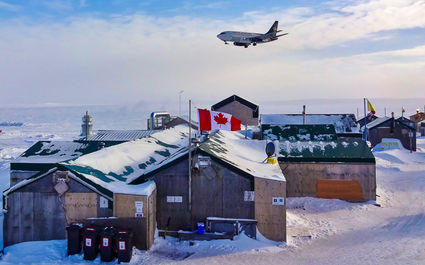 It's been nearly 10 years since Sabina Gold and Silver Corp. began exploring the Back River property in western Nunavut. But the decade-long pursuit of gold in this remote stretch of the Canadian territory could pay off big for the junior as the project enters the final stages of development

Back River is one of several advanced projects being propelled toward first gold in Nunavut, but its relative isolation from infrastructure and historic gold mining makes it unique among projects expected to emerge from the territory's mining pipeline in the next few years.

Viewed as highly prospective for a mine life that will last for decades and ongoing new discoveries, the Back River project covers an 80-kilometer (50 miles) gold district located roughly halfway between Bathurst Inlet to the north and the Nunavut-Northwest Territories border to the south in the westernmost Kitikmeot region of Nunavut.

The project's current mine plan involves only six kilometers (4 miles) of the district, which could produce gold for multiple generations.

When Sabina purchased Back River in 2009, it had already been explored by multiple owners dating back to discovery of gold mineralization on the property in the late 1980s. It had a global resource of 2.3 million ounces of gold.

Since then the junior has made multiple gold discoveries at Back River, including two new deposits during its first season of exploration in 2010.

The junior upgraded Back River's resource in 2015 to proven and probable reserves exceeding 2.5 million oz gold.

"We decided it was time to demonstrate that the project (could) be economically mined, so we embarked on our economic studies in 2014. It takes a long time to develop a mine (especially in such a remote area)," Sabina President and CEO Bruce McLeod told Mining News recently.

"Since the time it was discovered in 1989 or so to our goal of starting production in Q4, 2021, it will have been 32 years. A long time!" he said. "It will be approximately 12 years for Sabina to have purchased the property and got it into production."

The project's first 3,000 metric-ton-per-day mine is envisioned producing about 244,000 ounces a year for the first eight years and averaging some 200,000 oz over an 11-year mine life.

To help overcome the cost constraints presented by its remote Arctic location, Sabina wants to develop a mining operation that would pull ore from three open pits – Llama, Umwelt and Goose Main, and one underground deposit at Umwelt.

Designed with a modest footprint, the initial development would feature an ice road rather than a permanent road connecting its camp to a barge landing area instead of a port, along with pre-fab modules instead of facilities built on site and a small structure for tailings that would be replaced after three years with their ongoing disposal in the mined-out open pits.

The mine would deliver a rapid payback of 2.9 years and an after-tax internal rate of return of about 24.2 percent with initial capital expenditures of C$415 million, according to a feasibility study completed by Sabina in 2015. The calculation is based on a US$1,150 gold price and a 0.80 (US$:C$) exchange rate.

Canada's regulators have approved the project and issued a final project certificate in December. The junior also signed 20-year benefit and land tenure agreements that provide surface land access on Inuit-owned land on the Back River property. Finalized with the Kitikmeot Inuit Association in April, the pacts give local Inuit financial and socio-economic benefits, including training, jobs, initiatives to create additional opportunities outside of the mining industry as well as an ownership stake in Sabina and a 1 percent net smelter royalty on future production from the mine proposed for the Goose property.

Sabina is now awaiting word on applications for the project's final mine permits and licenses.

Exploration, meanwhile, has continued unchecked. In 2017, the junior carried out limited spring exploration including drilling and a ground electromagnetic survey over previously identified high-priority targets at the Goose and Boulder deposits.

After the mine plan won approval from the Nunavut Impact Review Board in July 2017, Sabina drilled 10,000 meters of core targeting the Umwelt and Llama trends as well as the Kogoyok, GNS, and Echo zones.

Results from this drilling highlighted a new high-grade mineralized zone at Llama, with grades of up to 9.48 grams per metric ton gold over 38.55 meters within strongly altered iron formation rocks.

Sabina also surmised that Umwelt and Llama, two major deposits on the Goose Property, offer significant potential for additional gold mineralization. The drilling confirmed parallel structures along more than three kilometers (two miles) of strike in the high-grade Vault Zone at Umwelt and identified underground potential and a higher-grade zone with significant down-plunge step-outs at Llama.

In August, the explorer reported another new high-grade gold discovery, the Nuvuyak gold zone situated about one kilometer (0.62 mile) to the west of the Goose Main Deposit. Drill hole 18GSE545 intersected 11.58 g/t gold over 39.50 meters with abundant visible gold. Mineralization at Nuvuyak is hosted in a strongly quartz-veined, altered and mineralized iron formation sequence, and has many similarities to the high-grade Vault zone at Umwelt. Successful drilling at Nuvuyak demonstrates the potential for further discoveries on this highly prospective district.

A key focus of the summer drilling program was to follow up on the previous success at the Umwelt "Vault" and the Llama Extension targets, as well as to further test Nuvuyak, which is Goose Main's extension target.

Sabina complemented the drilling with a series of dedicated field exploration programs that consists of regional and detailed geologic mapping, geochemistry, and geophysics.

"Our strategy to discover and expand zones of high-grade mineralization at our Llama and Umwelt underground resource areas continues to add value and highlight the "blue sky" potential at Back River. We have demonstrated that the gold structures at the Goose Property have significant strike lengths with potential for considerable extension, and we have also demonstrated that high-grade zones within these gold structures are not uncommon," McLeod said in a recent statement. "Additionally, every hole we drill provides us with significant information to better understand how to vector in to these targets. All our existing deposits at Goose are open, and numerous exploration targets have been identified on the six-kilometer trend of this 80-kilometer district.

"We look forward to the continued delineation of these zones and to the potential discovery of new high-value zones at targets such as Nuvuyak and Echo-Kogoyak," McLeod added.

Sabina increased its summer drilling to 12,000 meters including additional drilling in the Nuvuyak gold zone, which remains open in all directions.

Sabina is viewed by industry analysts as an attractive investment and a potential pre-production takeover candidate, due to the scale and grade of the Back River project.

"SBB is the last high-grade, multimillion-ounce deposit still out there," a Canadian analyst observed in early 2018.

At least one key investor also sees the junior's potential. Zhaolin International Mining Co. Ltd., a subsidiary of one of the largest gold mining companies in China, made an investment of C$66 million in Sabina in early 2018. The Chinese company, which bought a 9.9 percent stake in the junior, has the right to participate up to 33 percent in all future financings until it owns 19.9 percent of Sabina shares. 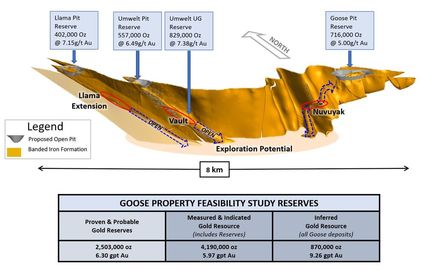