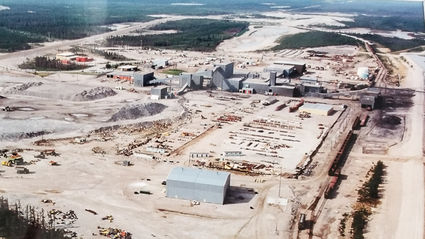 From 1962 to 1988, Cominco mined zinc-lead ore from a series of 50 surface and underground deposits along a 60-kilometer (37 miles) trend at its Pine Point operation near Hay River, Northwest Territories.

Having resumed drilling following spring break-up, Osisko Metals Ltd. is carrying out one of the largest base metals exploration programs under way in Canada this year at its Pine Point zinc-lead project, a former zinc and lead producing mining camp located near Hay River, NWT and about 200 kilometers (124 miles) to the south of Yellowknife across Great Slave Lake.

The objective of Osisko's 50,000-meter drill program in 2018 is to convert 50 million metric tons of unclassified near-surface historical resources on the 22,000-hectare (54,362 acres) Pine Point property to NI 43-101 inferred and indicated resources by the first quarter of 2019.

Osisko also believes the drilling results can be used as a resource base for future economic studies.

The explorer reported plans for the aggressive 2018 exploration campaign at Pine Point in late February shortly after completing acquisition of the historic mining camp from Pine Point Mining in a share buyout transaction.

Shortly after outlining the exploration plans, Osisko launched a winter drilling program at Pine Point. The explorer drilled on both properties in 2018 with a combined exploration target of 100,000 meters.

"The national drilling campaign is one of the largest base metal exploration programs in Osisko's junior mining peer group," Jeff Hussey, Osisko's president and CEO, observed in a statement.

By late April, Osisko said it had completed 7,860 meters of drilling in 129 holes in winter exploration. The program was designed to define portions of near-surface historical deposits that are inaccessible in the summer. Historical deposits in the camp are generally located at surface to 70-meter depths.

To hit its 2018 drilling target, Osisko accelerated the pace of its exploration in June by obtaining necessary permits to more than double the number of drills turning at Pine Point, going to seven rigs from three early in the summer.

The 2018 program targeted completion of roughly 700 drill holes, of which 323 holes had been completed by Aug. 23, within the Main Trend, a 20- kilometer-long, portion of the Pine Point mining camp that is situated near infrastructure and a paved highway and with 100 kilometers (62 miles) of haulage roads already in place.

Most of the summer drilling focused on areas within the central 20-kilometer (12 miles) long portion of the property that is located near infrastructure and accessed by paved highway. This area includes the East Mill and Central zones, where mineralization is shallow and where new compliant resources will form the resource base for future studies.

Among assay results reported in August from 18 drill holes completed in the Central Zone: Hole M6263-18-PP014 intersected 14.67 percent zinc and 1.94 percent lead over 6.75 meters; and hole M6263-18-PP-013 cut 6.34 percent zinc and 1.27 percent lead over 15 meters. All intersections are within flat lying tabular-style deposits and all intercepts are located above a depth of 82 meters. The reported holes are from the M62/63 deposit, which currently measures 1,100 meters in length within the Central Zone. The zone hosts 12 deposits with unclassified historical resources reported by Cominco Ltd. (1988) over 7.6 kilometers (4.5 miles), including the M62/63 deposit of 789,200 metric tons at 6.7 percent zinc and 2.5 percent lead). This area is located 11 kilometers (6.8 miles) to the west of the electrical sub-station along the main haulage road

"The Central Zone drilling continues to confirm the extensive, near-surface mineralization that potentially could be mined by open-pit methods," said Hussey.

Osisko Metals also entered a private placement deal in August that raised about C$10 million to cover eligible Canadian exploration expenses. The financing was expected to close in mid-September.

A positive preliminary economic assessment on the Pine Point project, completed in May 2017 by JDS Energy and Mining, showed a robust mining operation, which over a 13-year mine life would have an after-tax net present value of C$210.5 million and internal rate of return of 34.5 percent, with a payback of 1.8 years. The study assumed a zinc price of US$1.10 per pound and a lead price of US$1.00 per pound and used an exchange rate of C$:US$ of 0.75.

The Pine Point Technical Report is based on a mineral resource estimate for the Pine Point Project, which was prepared in accordance with NI 43-101 rules with an effective date of April 18, 2017. It included measured and indicated resources of 25.8 million metric tons grading 2.9 percent zinc and 1.1 percent lead.

Osisko's next objective is to convert roughly 30 million metric tons of inferred resources to the indicated category using 2018 drilling results.

In parallel with the ongoing drilling, compilation of Cominco's historical exploration data is underway to prepare for regional drilling and for an airborne gravity survey that will be conducted following the 2018 conversion program of the historical deposits. The high-resolution airborne gravity survey will assist Osisko Metals in identifying new targets both along strike and at depth. The favorable stratigraphy across the Pine Point camp is up to 300 meters thick, allowing for excellent exploration potential at depth, the company said.

"It's our intention to keep moving this project forward aggressively to capitalize on the current favorable zinc market fundamentals. Delivering the resource remains a priority for us to unlock the true value potential of this camp," Hussey said. "We expect to proceed with an extensive brownfield exploration campaign in 2019, following the historical resource conversion program."

The airborne geophysical survey included detailed gravity gradiometry and total field magnetics. The favorable carbonate horizon at Pine Point is 200 to 300 meters thick, and most of the historic drilling targeted zinc-lead mineralization in the upper third of this stratigraphy.

Mineralization at Pine Point was characteristically unresponsive to historical geophysical surveys, which limited previous exploration programs, according to Osisko.

Gravity gradiometry, unavailable when the historical surveys were completed, is the only type of geophysical tool that will identify potential targets below or adjacent to the historical deposits, company officials said.

Results of the detailed airborne magnetic survey will be used to map regional faults, which are commonly associated with mineralizing conduits. Coincident gravity anomalies located along faults or especially at fault intersections would be high-priority drill targets, according to Osisko. 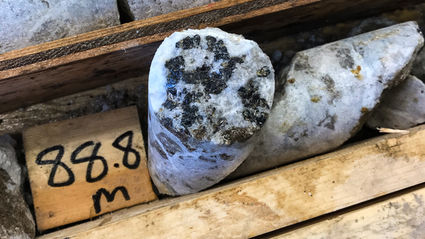 Confirmation drilling will focus initially on deposits located near the electrical substation, former concentrator site, and Pine Point town site. These deposits, known as Cluster Deposits 1 were not included a preliminary economic assessment of the project completed by JDS in May 2017.

Metallurgical testing, advanced baseline environmental studies and engineering trade-off studies will be performed as part of an aggressive development program concurrent to the large exploration program, the company added.