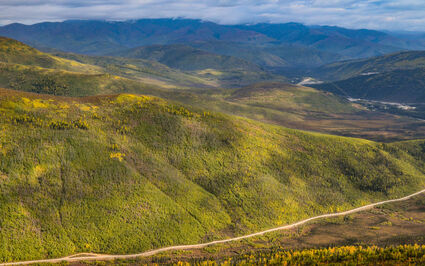 CSAMT cuts through the trees north from the Pogo Mine access road on Millrock's West Pogo property. The mill and other surface facilities at Northern Star's high-grade gold operation can be seen in the distance.

Many of the projects the company has generated have been sold recently to other companies in exchange for cash and shares of the company acquiring and exploring the project.

For 2019, Millrock focused largely on amassing a large land position in Goodpaster Mining District, a gold-rich region about 100 miles east of Fairbanks that is anchored by Northern Star Resource Ltd.'s Pogo high-grade underground gold mine.

Based on a long-held confidence in the district-scale potential of Goodpaster, Millrock pulled together a large portfolio of mining claims covering some of the most prospective gold exploration ground around the Pogo property.

"We believe that the Goodpaster District will ultimately prove to be a gold mining camp of significant stature. The area has seen very little exploration despite the obvious potential and proximity to infrastructure," said Millrock Resources President and CEO Greg Beischer.

In exchange for paying a significant premium for Millrock shares, EMX was granted royalty interests on Millrock properties in the Goodpaster District.

The Goodpaster portfolio resulting from this strategic investment includes the extension of West Pogo, a block of claims the project generator acquired in 2015 that demonstrates geological, geochemical and geophysical evidence of covering western extensions of the gold discoveries on Northern Star's property.

Several of these West Pogo targets are nearly drill ready and Millrock carried out a ground-based CSAMT (controlled-source audio-frequency magnetotellurics) geophysical survey to narrow down structures for drilling.

CSAMT has proven effective for the successful targeting of buried structures that host high-grade gold veins at Pogo, including gold bearing structures Northern Star is tracing to the boundary of West Pogo.

Millrock also plans to apply information gleaned from its exploration at West Pogo to the other properties it has generated in the Goodpaster.

This will be especially applicable to Shaw-LMS, a 42,580-acre block of claims that covers a prospective corridor extending roughly 19 miles southwest from West Pogo.

These claims cover stream sediment, soil, and rock samples containing elevated gold, arsenic, and bismuth geochemical anomalies that appear to be associated with intrusive rocks near splays off the Shaw Creek fault.

East Pogo is a 54,340-acre land package that covers several known prospects – Scott, Boundary, and Cal-Surf – on the east side of Northern Star's Pogo property.

Together, the East and West Pogo projects cover 27 miles along the Pogo Trend of gold occurrences.

North Pogo covers a largely overlooked area of favorable structures and stratigraphy on the north side of the Goodpaster Batholith, a large igneous intrusion that provided the mineralized fluids responsible for depositing the gold being mined at Pogo.

Divide is a property that Millrock staked about 25 miles southeast of the Pogo Mine based on the gold potential identified after going over an extensive geological database from nearly two decades of Goodpaster District exploration carried out by AngloGold-Ashanti and International Tower Hill Mines.

Millrock obtained this data as part of a larger deal with Corvus in 2015 that included the West Pogo claims.

The project generator also has an interest in Alaska Range resulting from the 2017 sale of its Stellar property to Australia-based PolarX Ltd. In exchange for Stellar, Millrock gained a substantial equity position in PolarX, retained a 1 percent net smelter return royalty on the property; and receives advanced royalty and milestone payments.

As a significant ArcWest shareholder, Millrock can benefit from that company's success in B.C. as it focuses on the Goodpaster District and other mineral projects it has generated in Alaska and Mexico.

EDITOR'S NOTE: Australia-based Northern Cobalt Ltd. has agreed to invest as much as US$20 million over the next four years to earn an interest in Millrock's Goodpaster property. To find out more about this exciting development, read Millrock cuts 20M deal for Goodpaster in the Oct. 25 edition of North of 60 Mining News.