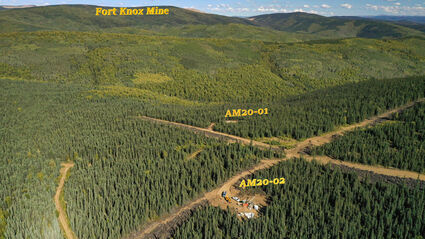 Avidian has two properties adjacent to the Fort Knox Mine property, which makes them ideally located to be potential future sources of the higher grade ore Kinross Gold Corp. is seeking for its underused mill at Fort Knox.

Avidian focused much of its 2020 exploration on Amanita, where previous exploration identified gold mineralization within the Tonsina trend, an 800-meter-wide structural corridor that extends northeast onto the Fort Knox property.

The company says these trench results, combined with the historical drilling, highlight the wide distribution of oxide gold mineralization with significant widths and grades.

This year, the company completed 1,945 meters of drilling in nine holes testing depth extensions of the strong gold mineralization encountered during the 2019 trenching as well as new targets turned up with high-resolution lidar and drone magnetic surveys carried out earlier in the 2020 season.

Avidian also had lidar and drone magnetic surveys flown over NE Amanita, which lies between Gil-Sourdough, a deposit Kinross said it plans to begin mining by the end of this year, and the Fort Knox mill.

Avidian has significantly upgraded the existing dataset at Amanita NE in preparation for drilling. 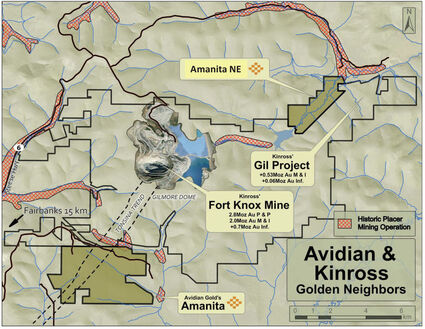 "Our plan was always to explore the Amanita NE project in early 2021 so our timing will be perfect as we drive value into this project as the spotlight turns to the Gil projects expected development," said Avidian Gold President Steve Roebuck.

Avidian also flew a lidar and orthophoto survey over its entire Golden Zone property during 2020.

A drone magnetometer survey was flown over the Breccia Pipe deposit area last year. Results from this and mapping is being analyzed to refine targets for future drilling.