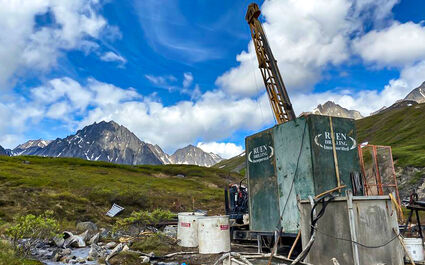 Australian explorer Nova Minerals Ltd. is rapidly building on the multi-million-ounce gold resource it has outlined on its flagship Estelle project in Alaska.

While more than a dozen targets have been identified across the 18-mile- (29 kilometers) length of Estelle, Nova focused its 2020 drilling on the Korbel deposit area at the north end of the property.

This resource, however, is only a "snapshot in time" as most of the assay results from the roughly 40,000 meters of drilling completed at Korbel during 2020 are not included in the calculation.

Until late in the season, most of Nova's drilling at Korbel has focused on two adjacent resource blocks, A and B. By October, drilling had connected these previously separate blocks into a 1,350-meter-long contiguous deposit now known as Korbel Main.

KDBH-022, the hole that demonstrated the continuity between the blocks, cut 140 meters averaging 0.4 g/t gold.

Completing its originally planned 25,000 meters of drilling for 2020 by early October, Nova expanded both the size and scope of its program at Estelle.

The 15,000-meter expansion to the program included follow-up drilling at Block B Southeast Extension zone, where drilling completed earlier this year cut 429 meters of 0.6 g/t gold from a depth of three meters, including 101 meters averaging 1.3 g/t gold and several multi-gram subsections.

In addition, the expanded program included the first ever drilling at blocks C and D, to intriguing targets that are 100 to 1,000 meters west of the resource.

"The Korbel deposit continues to grow as we now unlock Block D and C with our expanded drilling program as we seek to find further feeder systems within the Korbel prospect," said Nova Minerals CEO Christopher Gerteisen.

As drilling continued, it became more evident blocks C, D, Connex, and Isabella are converging with Korbel Main to form one large deposit that covers a roughly 1,600- by 1,500-meter area.

Nova geologists have also identified intriguing targets at several other prospect areas – Cathedral, You Beauty, and Sweet Jenny – within 2,000 meters of the Korbel deposits.

"While increasing resource volume has been our primary focus until now, we will begin to follow-up and delineate these zones with the additional drilling planned through 2021 and beyond," Gerteisen said.

Sampling of outcropping quartz-arsenopyrite veining at Cathedral returned values of 2.97 to 114 g/t gold. These high-grade gold samples have elevated Cathedral to one of Nova's highest priority drill targets for the 2021 program in the Korbel area.

The exploration potential at Estelle, however, goes well beyond Korbel.

"RPM is presenting surface features indicative of a much larger footprint for resource delineation than first thought," said Gerteisen. "The commencement of drilling at RPM is scheduled for 2021 and marks the start of Nova's next growth phase for the benefit of all stakeholders."

Shoeshine, an early staged exploration target about 4.5 miles (seven kilometers) northeast of RPM, is another interesting target. The average grade of 49 historical samples collected from a rubble field at Shoeshine was 0.59 g/t gold, including one sample of porphyry rock cut by sheeted quartz veinlets with 13.13 g/t gold.

As Nova begins work on a preliminary economic assessment that provides a first look of a mine at Korbel, the company has plenty of blue-sky potential to explore at Estelle.

Nova also owns Officer Hill, a gold project in Australia's Northern Territory under a joint venture with Newmont Corp .; and has an indirect interest in the Thompson Brothers lithium project in Manitoba through a substantial stake in Snow Lake Resources Ltd.