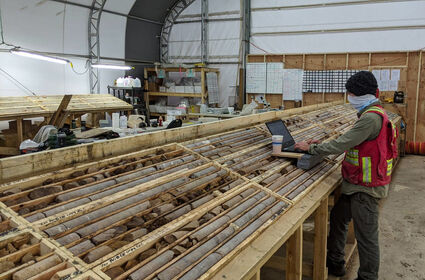 With 87,298 meters of drilling completed by Benchmark, the core shack at Lawyers was a busy place during 2020.

After raising a staggering C$50 million through a financing led by Sprott Capital Partners, more than twice the C$21 million original 2020 offering, Benchmark Metals Inc. announced plans to complete up to 300,000 meters of drilling at its Lawyers gold-silver project in Northern British Columbia by the end of 2021.

Eric Sprott, who already owned roughly 15.6 million Benchmark shares, bought another 7.8 million during the financing that closed in September. As a result, the renowned investor owns a 15.6% equity interest in the BC gold-silver explorer and holds enough warrants to raise his stake to 20%.

"The keen interest and capital support from key institutional investors establishes Benchmark's Lawyers gold-silver project as one of Canada's leading exploration stories and illustrates its potential to deliver a quality mining asset," said Benchmark Metals CEO John Williamson. "To that end, the company will plan and execute systematic work programs over the next two years to go beyond the PEA (preliminary economic assessment) towards a feasibility study."

Situated about 45 kilometers (28 miles) northwest of the world-class Kemess gold-copper porphyry deposit, Lawyers is home to a small underground mining operation that produced 171,200 ounces of gold and 3.6 million oz of silver over a four-year period beginning in 1989.

The deposits were never fully mined, nor the surrounding area thoroughly explored, and Benchmark has identified additional high-grade and bulk tonnage gold-silver targets within the central area of Lawyers trend, a more than 20-kilometer- (12.4 miles) long prospective corridor that runs across the property.

This Vancouver, BC-based explorer sees the potential of building a 5-million-oz gold-equivalent resource in four zones it has identified in the central portion of the Lawyers trend – Cliffs Creek, Dukes Ridge, Phoenix, and AGB.

Benchmark originally planned to drill around 50,000 meters during 2020, an already robust program that was increased to 87,298 meters as investors piled on to its financing.

With five drills turning, this expansive program began at Cliff Creek, a 1,200-meter-long bulk tonnage target that is believed to host up to 1.4 million oz of gold and 44.4 million oz of silver in mineralization averaging around 1.3 grams per metric ton gold and 40 g/t silver, according to modelling.

"This drill hole was targeting a zone of limited historical drilling east of the Cliff Creek main zone and outside of the modeled mineralization," said Williamson. "This significant result of both high-grade and bulk-tonnage mineralization is very encouraging as it will provide additional tonnage, better strip ratio and improved gold and silver grades for the Cliff Creek resource potential."

As drilling continued, so did the size and grade potential of Cliff Creek.

Hole 20CCDD008 cut 30.6 meters averaging 2.05 g/t gold and 107.1 g/t silver. This higher-grade gold-silver mineralization was hit at a depth of around 346 meters, the deepest intercept so far at Cliff Creek.

"The results at the Cliff Creek area are showing broad higher-grade zones of previously unrecognized mineralization at depth and as a result will likely positively impact our maiden mineral resource estimate in Q1 (first quarter) 2021," Williamson said in October. "As our geological team continues to build its understanding of the Cliff Creek mineralization, we continue to discover extensive mineralization with successful modelling and drill targeting."

This success includes the widest intercepts so far at Lawyers.

By early November, Benchmark had already completed 75,000 meters of drilling in a fast-paced program that also tested Dukes Ridge, Phoenix, and AGB – zones with similar resource potential as Cliff Creek.

"We are applying the same principles of systematic exploration and geological interpretation to other zones in anticipation of the same impressive results," said Williamson.

Marmot is a highly prospective target that covers a 2,000- by 3,000-meter area where grab samples with up to 61.3 g/t gold and 3,890 g/t silver have been collected. Benchmark drilled an initial five holes at this discovery target about 2,500 meters southeast of Cliff Creek.

Benchmarks says Silver Pond, a four-square-kilometer (1.5 square miles) alteration zone about 1,500 meters northwest of Cliff Creek, shows large-scale zonation patterns and metal associations indicative of high-sulfidation or porphyry mineralization. Detailed mapping has linked the alteration at Silver Pond to large-scale fault zones that may have provided a conduit for the mineralizing fluids.

The company says a 3D induced polarization geophysical survey correlated exceptionally well with the mapping and was able to image deep in the subsurface, below the lithocap alteration, providing refined drill targets for the 3,914 meters of drilling completed in nine holes in 2020.

Even before assay results from Marmot and Silver Pond had come back from the labs, Benchmark was planning to continue testing the precious and base metals potential of these targets as part of the 200,000 meters of drilling slated for Lawyers in 2021.

The 2020 sampling, mapping, and prospecting program also turned up two new zones – LaLa, which is about 3,000 meters south of Cliff Creek, and Gifford's Edge, which is southeast of Phoenix.

Results from the 2020 drilling are being incorporated into a mineral resource for Lawyers, which will form the basis for a PEA that provides a first glance at the economics of reestablishing a mine at this Northern BC gold-silver project. 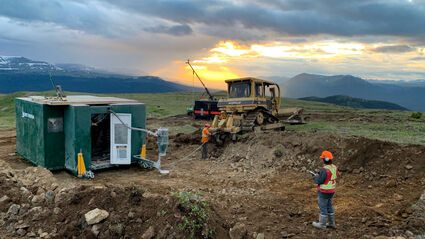 Benchmark Metals plans to complete up to 300,000 meters of drilling at its Lawyers gold-silver project in Northern British Columbia by the end of 2021.

Looking to elevate this scoping level study to a full feasibility study for a mine that can be taken into permitting by the end of 2022, Benchmark is carrying out an even more extensive drill program at Lawyers this year.

In addition to the very large drill campaign, this accelerated schedule requires a large amount of engineering, permitting and baseline environmental work to develop and support a mining scenario for Lawyers.

In order to meet this accelerated schedule, Benchmark has established a larger and winterproof camp and other infrastructure needed to carry out the year-round exploration aimed at unveiling Lawyers' inherent potential.

"The potential of the 20-kilometer Lawyers trend has grown well beyond what was identified by the historic Cheni Mine into an emerging district-scale gold and silver exploration region," Williamson said.