Although the AMA often takes the lead with regulatory issues, miners should not sit back when it comes to significant issues North of 60 Mining News – February 26, 2021 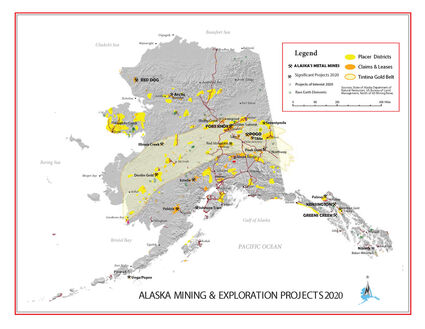 Without a doubt, 2020 was somewhat less than a perfect year. If you didn't like the way it started out, with an impeachment and a pandemic dominating the news, you might not have liked the way it ended, with a pandemic and an impeachment dominating the news. While miners from one end of Alaska to the other were doing whatever they could to remain safe and in business, travel restrictions and quarantines certainly did not make things any easier.

Whether you were a Trumper or a Never-Trumper, you probably were not enthralled with the 17 Executive Orders that President Biden signed on Inauguration Day. While every President is entitled to a honeymoon his (or her) first few weeks in office, a closely divided Senate surely will make it difficult for Biden to redirect the federal government very quickly. Despite the vandals and demonstrators of whatever political stripe, it is fair to say that our democratic republic will probably survive until the next election.

If you squeeze your eyes really tight and think happy thoughts, it is possible to conclude that there is a bright spot on the horizon. For instance, there are two COVID-19 vaccines being distributed to the general population as rapidly as logistics will permit, and there are more in the pipeline. Losing half a million countrymen to an infectious disease is a rare and unimaginable horror, but slowly we are seeing the incidence of spread slow, and undoubtedly it will come to a halt.

Last spring, with masks in place, the Alaska Legislature passed, and the Governor signed into law, a series of amendments to the Alaska Land Act relating to mining operations on State land. That was good news for the Alaska Mining Industry. Perhaps only a color in a gold pan, but, in the traditional fashion, it can give us hope.

Predictably, the Alaska Department of Natural Resources (DNR) turned its attention to amending the regulations affecting mining on State land to ensure that the statutory language and intent were appropriately implemented. Once DNR was able to conclude its drafting responsibility, the proposed regulatory amendments were tendered to the public for review and comment.

At that point the Alaska Miners Association went to work, scrutinizing DNR's regs to ensure that they conformed to the law and implemented the best result for our mining industry and all the people of Alaska.

It is no secret that the new administration in DC has a death wish for those who would convert hydrocarbons to energy to feed America's gaping maw. And for the next two or more years, we can count on an incessant attack at every level on the industries that put a lightbulb in virtually every home in America, not to mention a computer and a hot water heater. We cannot ignore the barbarians at the gate. Nonetheless, Alaska does have something more to offer America besides coal and oil and natural gas.

Without putting too fine a point on it, we have copper and lead and zinc, and oh, by the way, lots of gold and silver and perhaps a viable deposit or two of rare earths. Alaska remains America's treasure chest, no matter how many of our fellow citizens rail in favor of us all living in trees and eating snakes.

These minerals will be needed on an on-going basis far into the distant future. One-third of the Alaska land mass was selected by the State with an eye toward its mineral potential. Accordingly, it will be incumbent on the State's regulatory agencies to ensure that these mineral deposits are available for development in a safe, healthy, and environmentally sound way, without imperiling the competing values of subsistence, commercial fishing, tourism, and a cascade of other things that are important to all Alaskans.

For these reasons, it is important that interested parties, whether miners or not, ensure that the proposed DNR regulations do no harm.

The regulations are neither complex nor obfuscatory, but they are important. If there is a silver lining from the calamities of the past twelve months, it is that with few objections, we will go forward and 21st Century mining in Alaska will be secure.

The AMA's comments on the proposed regulations were very specific and extremely well prepared by some of our industry's best experts. The comments addressed misstatements with regard to priority of locator's rights; inappropriate disqualification of certain claimholders; deficiencies with regard to the mapping of claims by the State; internal cross-referencing errors; the location of claims that extend onto restricted status land; details regarding the timing and substance of affidavits of annual labor; and resolution of who qualifies as a successor in interest and a clarification as to who may be considered a qualified expert.

Notably, although the AMA has commented on these proposed regs, that doesn't relieve those who may be impacted by them from staying abreast of whether and how DNR responds to AMA's guidance. It behooves you, the miner, to oversee this exercise. The regulations are rarely changed, and the Alaska Land Act historically has been amended only once every 20 years since Statehood. What happens now is what will be the law for a long time.

The silver lining for the past year, as small as it may be, is that as we socially distance in our homes, we have the time to do what we must to protect our industry by ensuring that the changes in the law will protect us all for the next couple of decades.