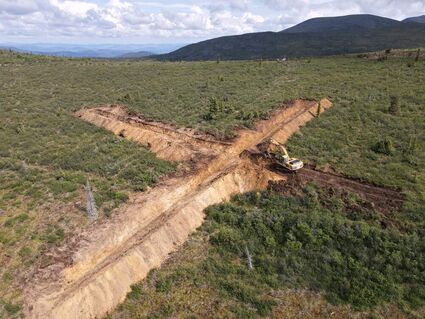 ATAC Resources Ltd. focused its 2021 mineral exploration largely on the East Goldfield project in Nevada and the Connaught project in western Yukon, a departure from more than a decade of primarily exploring its district-scale Rackla Gold property in the Yukon.

This shift in jurisdictional and project focus followed the Yukon government's rejection of the company's application for a permit to build a private road that would support advanced exploration and potential mine development at Rau, a 660-square-kilometer (255 square miles) project at the western end of the company's enormous 185-kilometer- (115 miles) long Rackla Gold property in the Yukon.

Regardless, the company went forward with the planned program for Connaught – a road-accessible silver property about 65 kilometers (40 miles) west of Dawson City and 10 kilometers (six miles) east of the Alaska-Yukon border – to include systematic exploration and geophysics at the porphyry target area.

"Porphyry potential has long been recognized in this area, but systematic exploration for this style of deposit has never been undertaken," said ATAC Resources President and CEO Graham Downs.

The company reported that nine out of 10 trenches dug across a 1,100- by 500-meter copper-molybdenum soil anomaly cut visual copper mineralization, including malachite, azurite, tenorite, and chalcopyrite. 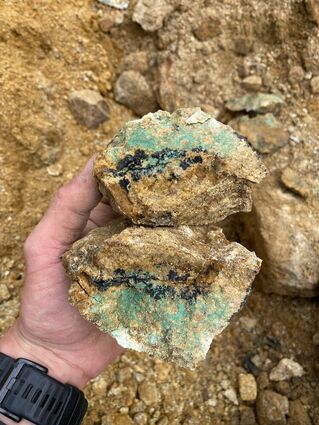 A grab sample from the 2021 exploration at the Connaught property in the Yukon.

"The copper values at surface are very impressive given the extent of surface leaching in an unglaciated environment, and the soil and trenching results compare favorably with surface values at similar projects," added Downs.

Separate from its Connaught exploration, ATAC also plans to carry out grassroots exploration at Rosy, a gold-silver project about 77 kilometers (48 miles) east of Whitehorse, as well as other regional gold targets in Yukon.

ATAC Resources is a member of the Strategic Exploration Group, a collection of junior resource companies focused on exploring northwestern Canada. Members of the group enjoy a close working relationship with Archer, Cathro & Associates (1981) Ltd., a geological consulting firm with extensive exploration expertise in Yukon and Northern British Columbia.