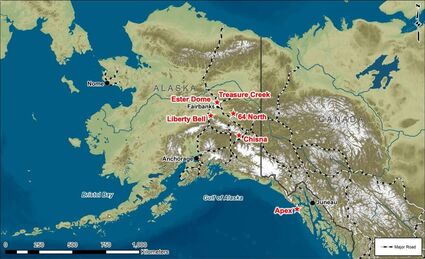 As a project-generating exploration company, Millrock Resources Inc. identifies and secures grassroots mineral projects and brings on partners to fund the high-risk early stages of exploration. In recent years, many of these have been with Australian companies intrigued by Alaska's rich and underexplored mineral potential.

Newly formed Felix Gold entered into a strategic alliance with Millrock on several projects – Treasure Creek and Ester Dome near the Interior Alaska city of Fairbanks, plus the Liberty Bell project about 70 miles to the southwest.

Located about five miles south of Treasure Creek, the Ester Dome property is home to the past-producing Grant gold mine.

Felix is evaluating this resource to determine what, if anything, needs to be done to bring the estimate up to date and in compliance with the Australian Joint Ore Resources Commission (JORC) standards for resource calculations.

Over the course of the 2021 season, the partners expanded Felix Gold's already large landholdings in the Fairbanks District with agreements on two additional properties – GST and Bank.

Bank, which includes the Treasury and Vault claims that border the Golden Summit and Fort Knox properties, hosts a number of interesting gold occurrences.

While Felix and Millrock evaluate the very large land package they have accumulated in the Fairbanks district, Resolution is drilling targets at 64North, a roughly 160,000-acre land package surrounding Northern Star Resources Ltd.'s Pogo gold mine in the Goodpaster district.

Under a deal signed at the end of 2019, Resolution has the option to earn up to a 60% interest in this large land package by investing US$20 million in exploration spending over four years.

Upon earning a 60% interest on the entire 64North project, Resolution will have the option to increase its interest on one of nine claim blocks that make up the larger project – West Pogo, Shaw, Eagle, LMS-X, South Pogo, East Pogo, North Pogo, Last Chance, and Divide – by funding a feasibility study and Millrock's portion of mine development on the selected block.

In addition to attracting Aussie explorers, Millrock cut a deal with Coeur Mining Inc. for exploration of the Apex gold project in Southeast Alaska.

Located about 70 miles southwest of Juneau, Apex is home to the historical Apex and El Nido mines, which produced at least 34,000 oz of gold from ore averaging around 1 oz/t gold during sporadic operations between 1922 and 1940.

Surface exploration was done by WGM Inc. in the 1980s, but no drilling was carried out, and the property has been dormant until Millrock secured an option on the core claim group in 2016.

"From historic documents, we know that high-grade gold ore was previously mined, but there has never been a single exploratory hole drilled," said Millrock Resources President and CEO Greg Beischer. "It seems likely that the known high-grade gold-bearing quartz veins will continue along strike and in the down-dip direction."

Under the agreement, Coeur will be responsible for making cash payments and funding exploration expenditures to keep an option agreement with the underlying land owner, Apex El Nido Gold Mines, in good standing.

Millrock is carrying out the exploration on the Apex property under a services agreement with Coeur.

Soil sampling carried out last year focused on tracing the mineralized structure and refining vein locations in anticipation of a 2022 drilling program at the high-grade gold project.

Millrock's Alaska portfolio also includes Liberty Bell, a road-accessible project about 70 miles southwest of Fairbanks that is prospective for copper-gold porphyry and associated gold deposits; and Chisna, a gold-copper-silver project about 75 miles southeast of Goodpaster.