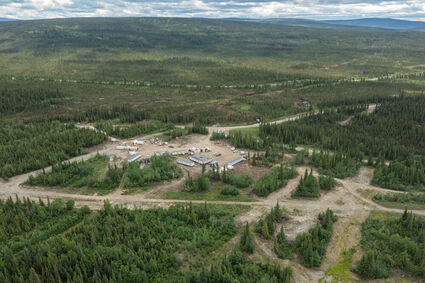 With the goal of expanding the resource at AurMac to more than 3 million ounces of gold, Banyan Gold Corp.'s 2021 exploration consisted of a large and systematic step-out drill program at the Powerline deposit on this property about 40 kilometers (25 miles) south of Victoria Gold Corp.'s Eagle Gold Mine.

Considering the success of the systematic step-out drilling undertaken at Powerline throughout 2021, there is a strong possibility that inference may change from the massive expansion being done at Powerline, with the company stating an updated resource calculation is slated for the second quarter of the year.

Highlights form the 2020 Airstrip drilling include:

The more than 30,000 meters of drilling completed at AurMac during 2021 focused on the rapid expansion of the gold mineralized footprint at Powerline.

Splitting its focus between resource upgrade and expansion drilling, Banyan had two diamond rigs targeting prospective growth with its 100-meter step-out grid-based drilling, and one rig concentrating on tighter spaced drilling toward refinement of the gold continuity modeling of Powerline ahead of the projected resource calculation this year.

During 2020, Banyan reported that drilling at Aurex had intersected a well-developed and pervasive oxidized footprint to depths of more than 40 meters.

The 5,000-meter initial phase of the 2021 drill program at Aurex Hill was planned to build on the success of the 2020 drilling, ultimately with the hopes of connecting the mineralized zone with the greater AurMac property.

As of the third-quarter update in November, assay results from drilling at Aurex Hill are pending, having been held up to the ongoing protracted process timelines at Yukon preparatory analytical laboratories.

Before labs got backlogged, Banyan did receive assays from early 2021 drilling at Powerline that tapped remarkably consistent gold mineralization in the south and east in the Powerline resource area.

Highlights from the early results include:

By September, the systematic step-out drilling had impressively increased the area of known gold mineralization at Powerline by more than 650%.

"The ongoing results are steadily and strongly demonstrating the size potential of the Powerline deposit," said Banyan Gold President and CEO Tara Christie in late August. "It's extremely rare to outline a near-surface deposit of this size and tenor immediately adjacent to an existing highway, communications and power infrastructure."

The mineralization found there was interpreted to be associated with swaths of quartz veins dipping shallowly to the north and within pyrrhotitic horizons with a dip to the south. Thus, the combination of the two controls of gold mineralization equates to sub-horizontal mineralization envelopes at the current drill hole spacing.

The constancy in grade a widths persisted as Banyan continued to expand the Powerline footprint. 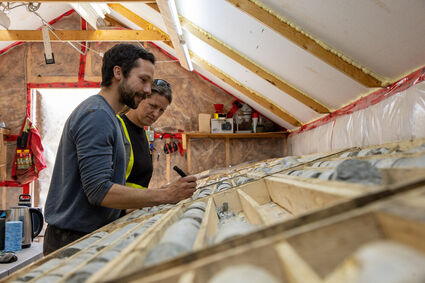 Christie told Mining News that Aurex Hill and Airstrip have potential to add gold to the AurMac resources, but the exciting results being returned from Powerline have compelled the company to continue its 100-meter step out strategy of this 2019 discovery deposit.

Banyan's 2021 exploration season ended in December, with the company expected to resume its expansion drilling at Powerline early this year.