If a jackleg is the lowest position in a mine, what is the highest position in the White House? (Hint: it's just above the leg.) North of 60 Mining News – March 4, 2022 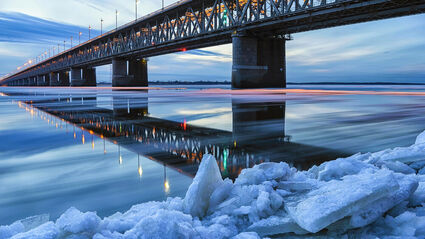 Amur River, China's third-longest river and the longest flowing through Russian Far East, is an important symbol in Sino-Russian relations.

This past week the Biden Administration released a document ineptly entitled "Fundamental Principles for Domestic Mining Reform." It would have been more accurately called "Eleven Ways to End Mining in America."

It is not difficult to understand why an East Coast boy from Delaware (or maybe Scranton) would have no affinity with the American mining industry. Among other things, Mr. Biden probably could not identify three distinctions between a jackleg and a jackass, other than the anatomical position.

One really does not need that degree of sophistication to work all your life on Capitol Hill despite the fact that a good part of our nation's history, at least since the middle of the Nineteenth Century, was built on the contribution of miners to the economy.

Biden makes the point that the General Mining Law (coincidentally, like the establishment of Yellowstone National Park) has essentially remained unchanged for 150 years.

To his mind, little items like the National Environmental Policy Act, the Clean Water Act, and the Clean Air Act, just to mention a few scraps of the corpus juris that must be accommodated when bringing a mine into production, don't really count.

He acts and reacts toward mining as if contemporary domestic operations are not environmentally sound, irrespective of the lack of environmental quality of most major non-domestic mines.

He seems totally unaware that the major burden most major mining projects in the United States have to deal with is years, if not decades, of studies and public input, generally paid for by the mining company and which often precipitate cascades of litigation by NGO's complaining about everything from the impact of climate change to the denial of Earth Justice.

He is tone deaf to the relevance of the Ukraine invasion to the domestic mineral industry.

For instance, he threatens Vladimir Putin with fiscal penalties while bemoaning the fact that "the U.S. is reliant on China for many [of the key critical minerals necessary to meet our climate goals]." It is as if the summit between Putin and Xi Jinping never occurred.

It takes little effort to connect the dots. What does Russia have lots of? Oil. What does China need to support its economy? Oil. What lies between China and Russia? The Amur River.

How will China pay for Russian oil? In Yuan. Why does China want to provide Russia with billions of Yuan? China wants to displace the US Dollar with the Yuan and for the Yuan to be the chief global currency.

Why does China want the Russian invasion to dominate the headlines? Because if the popular press is absorbed with Ukraine, it won't notice a Chinese incursion into Taiwan.

After all, America knows better than to engage in two international wars at the same time.

Biden is right. America needs to revise the mining laws to ensure that we have domestic sources for critical minerals. But if you read his eleven steps, it is obvious that the conceptual objective is far removed from the endorsed methodology.

Biden proposes "prioritizing recycling," but recycling doesn't take into account the expanding need for critical minerals. It is axiomatic that "you cannot save yourself rich."

Obviously, recycling is desirable, but demand for critical minerals moves in lockstep with population growth, and, while the U.S. is not increasing its population through its birthrate, the "tired, ... poor, ... huddled masses yearning to breathe free" are at the border.

And when they get in, they are going to want lithium, graphite, cobalt, and nickel (all of which are available in Alaska if the government would let us mine them), just as they want gold and silver, and copper and zinc (which Alaska already mines quite nicely, thank you).

It is outrageous that the Biden Administration thinks that American taxpayers will benefit by taxing the mining industry through royalties. The last time I checked, taxes were passed through to consumers in terms of increased prices. The taxes aren't paid out of thin air. This is nonsense.

Biden bemoans that there are half a million legacy mines in need of reclamation and smiles on Good Samaritan legislation pending in Congress but simultaneously advocates avoiding the development of new mines. This is not reality. We need both and soon.

He calls for permitting certainty, apparently not realizing that a major mine often requires over fifty permits with concomitant bureaucracies which have no commitment to getting to "yes."

Biden wants to protect special places. By definition, I think, a "special place" is any place that I may be, or may go to, or may want to go someday, or at least may read about in a magazine. He seems blind to the fact that every place is "special" to someone.

He wants to ensure that mining projects have regular, meaningful, and robust consultation with Tribal Nations, but gives no indication as to how to resolve differences.

He wants to utilize the best available science and data, apparently without realizing that this is the standard under the existing environmental laws that impact the mining industry today.

Finally, he wants to build civil service expertise in mining. Duh. I have an idea. How about if we establish a "Bureau of Mines" and staff it with mining engineers and geological economists? Oh, we've already tried that? Never mind.

Mr. Biden, your eleven points miss the mark and endanger the future of our nation.

Well said, J.P.! It is mind boggling to hear our president proclaim that by 2030, he wants 50% of vehicles on U.S. roads to be EVs. He hasn't a clue as to what it's going to take to achieve that goal. We'd have to ramp up our mining capacity by over 10% each year over current capacity to even dream of hitting that benchmark. Biden and his people have done nothing to further that requirement and, as you know, they've done quite a bit to restrict our ability to produce the required raw materials.