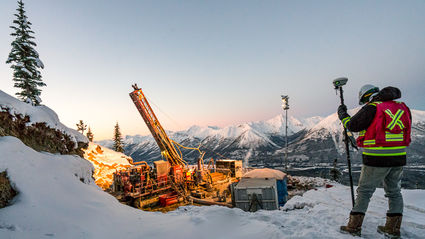 Golden Predator kicked off 2018 with a 4,000-meter winter drill program at its 3 Aces project in southeast Yukon.

Golden Predator Mining Corp. kicked off 2018 with results from 43 "grade control" holes drilled at its 3 Aces project in southeast Yukon, including the highest-grade gold intersection drilled on the property.

These holes were designed to investigate close-space variability in three different areas of the project's Spades zone to prepare for resource delineation drilling across the central core area – a 13.5-square-kilometer (5.2 square miles) section of the 3 Aces property that hosts several high-grade zones.

Raising C$8.4 million in February, the company conducted a 4,000-meter winter drill program that included wide-spaced holes testing the continuity of favorable stratigraphic-structural contacts along the Hearts-Clubs corridor and demonstrated a structural model established by the Golden Predator team.

"Closing out 2017, we made a significant breakthrough that enables us to explain nearly all the gold occurrences in the 3 Aces area using a single unifying conceptual model. Our team realized some time ago that there was a common thread uniting the many seemingly isolated gold showings in the 3 Aces area, and they have been working to integrate our exploration results to find the common links," said Golden Predator Mining CEO Janet Lee-Sheriff.

With the winter drill program validating the model, the company began testing favorable contacts at Sprogge, a property at the southern end of the 357-square-kilometer (138 squares miles) 3 Aces project, with a 2,500-meter drill program that got underway in July.

Situated immediately southeast of the original 3 Aces property, Sprogge covers structural-stratigraphic contacts similar to those that host the high-grade gold in the Core Zone. Historical surface sampling of the primary structural zone at Sprogge returned 25 quartz outcrop samples ranging from 5.73 to 46.49 g/t gold along 2,000 meters. This exposed primary structural control lies along the eastern edge of an extensive gold-in-soil anomaly. Golden Predator's drilling is the first program to target this prospective outcropping structure.

The company said similar contacts can be traced from Sprogge through 3 Aces and projected to the Reef and Hy-Jay gold occurrences some 35 kilometers (22 miles) to the north.

Golden Predator's 2018 program also took a fresh look at Brewery Creek, the site of a past-producing gold mine 55 kilometers (34 miles) east of Dawson City. A 2014 preliminary economic assessment outlined plans for a heap-leach operation that would produce an estimated 372,000 oz of gold over nine years. This includes mining 10.2 million metric tons of open-pit material from eight deposits averaging 1.35 g/t gold and reprocessing material located on the former heap leach pad.

Golden Predator said the use of vat recovery in an enclosed facility has the potential to improve recoveries; bring a larger portion of the resource base, including some sulfide material, into the mine plan; improve environmental controls; and provide more robust project economics.

To further evaluate the potential of vat recovery, the 2018 program included about 500 meters of drilling that twinned metallurgical holes drilled in 2016, as well as holes used in previous column leach testing reported in the 2014 PEA.

In May, Golden Predator and its subsidiary Yukon Mint unveiled the First Yukon Mint .9999 gold coin. These coins will be part of a limited annual series featuring First Nation art on the obverse side and an iconic image of Klondike Gold Rush on the reverse.

Gold from bulk sampling at Golden Predator's 3 Aces project in southeastern Yukon is incorporated into the coins and a percentage of the net profits from the sale of the coins will be shared with the Kaska Nation.

McEwen Mining Inc. Chairman Rob McEwen, who is one of Golden Predator's largest shareholders, purchased the first gold coin from the Yukon Mint. 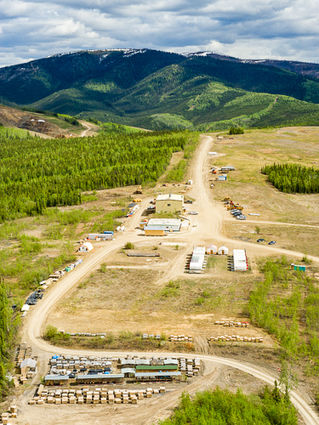 This council will assist Golden Predator management and field staff in reviewing, interpreting, advising and planning on exploration and technical matters relating to the company's current mineral exploration projects; and identify new opportunities in the Yukon, Alaska and British Columbia