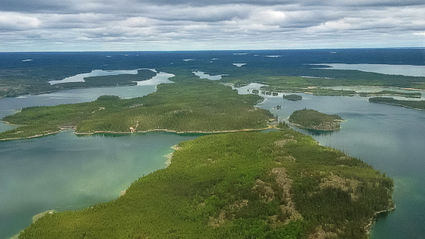 TerraX Minerals Inc. has set its sights on unlocking a multimillion-ounce gold district at the Yellowknife City Gold Project, a 772-square kilometer (298 square miles) property north, south and east of the capital of Northwest Territories.

Blanketing the same geological trend that hosts the historic Con and Giant mines, which produced a combined 14.2 million oz of gold, the three properties that make up the YCGP – Northbelt, Southbelt and Eastbelt – cover a region known for yielding deposits of the scale and grade to be counted among Canada's great gold camps.

Northbelt is the first of these properties acquired by TerraX and the "core gold area" there extends north from Yellowknife and the historic mines. TerraX says the main gold targets it has identified along this 10-kilometer- (six miles) long corridor – Walsh Lake, Sam Otto, Barney, Herbert-Brent, Shear 20, Crestaurum and Homer – are indicative of a larger mineralized system.

This summer, TerraX sampled Gull Lake and Rater Lake, new gold zones at the southern end of Northbelt. Highlights from these newly discovered zones include gold grades of 43.7 g/t, 28 g/t, and 19.1 g/t in samples taken from Gull Lake; and several other samples ranging from 1.0-5.0 g/t collected from both zones.

TerraX said these grades are comparable to historical production at the Ptarmigan Mine and the explorer's initial work confirms continuity of the large mineralizing systems there.