Are mega-gold-mergers good for North? 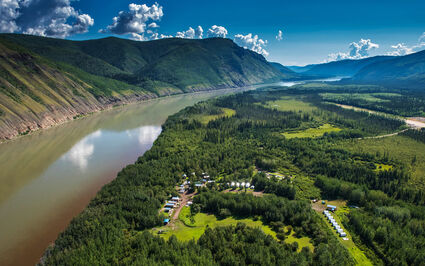 While the two largest gold mining companies Newmont Goldcorp (No. 1) and Barrick (No. 2) are still in the process of shedding assets following the mega-mergers, it seems that Newmont Goldcorp will emerge with a much stronger foothold in Alaska, British Columbia and Canada's North than Barrick.

Both Newmont and Barrick dropped options on potentially sizeable gold exploration projects in the Yukon around the time of the mergers, raising questions as to whether they would pull out of the North completely in favor of more southern jurisdictions where they are better established.

For example, shortly after their individual mergers, Barrick and Newmont formed a joint venture alliance on their operations and other mining assets in northeastern Nevada, a business combination that encompasses 22 mines that produced 4.1 million ounces of gold during 2018.

Barrick President and CEO Mark Bristow, who is also chairman of Nevada Gold Mines, says the establishment of the JV gold mining company was designed to combine arguably the industry's best assets and people in order to deliver the best value to stakeholders of both companies.

"Its creation was driven by a compelling logic which had long been evident to all but had been elusive for two decades until we finally achieved a breakthrough this year," Bristow said.

With only a few scattered exploration and development assets across the North, these two mega-gold-miners may not be driven by the same compelling logic to establish such synergies in Alaska, British Columbia or the Canadian territories.

Newmont sips Coffee in the Yukon

Newmont Goldcorp, which emerged from its early-2019 merger as the largest gold miner on Earth, has gold projects across the North. These range from a grassroots gold property near the Pogo Mine in Alaska to an equity position in the owner of a gold operation in Nunavut.

In between these geographical and mining stage extremes lies Newmont Goldcorp's Coffee Gold Mine project in the Yukon.

Acquired by Goldcorp in 2016, Coffee is an advanced staged gold project in Yukon's White Gold District.

A feasibility study completed for Coffee just before Goldcorp's acquisition details an open-pit, heap-leach gold operation capable of producing 184,000 ounces of gold annually over a 10-year mine life at all-in sustaining costs of US$550/oz.

Since buying Coffee, Goldcorp has invested in expansion of the resource and exploration of other targets across the 60,000-hectare (149,000 acres) property, a program that is continuing under the Newmont Goldcorp banner.

In January, Goldcorp Kaminak Ltd., a subsidiary of Newmont Goldcorp, received approval for extensive exploration drilling, trenching and bulk sampling between now and 2021.

In the meantime, the company continues to advance Coffee through the permitting process.

The Yukon Environmental and Socio-economic Assessment Board has completed a public comment period and has asked Newmont Goldcorp for additional information prior to continuing the review.

While continuing to advance Coffee, Newmont Goldcorp dropped Plateau, another enticing gold property in the Yukon that Newmont had been exploring.

Newmont first became involved in Plateau in 2017, when it cut a C$53 million deal with Goldstrike Resources Ltd. to earn up to a 75 percent stake in this expansive and gold-rich project.

Newmont invested roughly C$13 million on exploration focused on understanding and modeling the controls of the high-grade gold mineralization Goldstrike had previously identified at Plateau.

"Although the Plateau project currently may not meet the corporate thresholds at Newmont, the extensive data base indicates this district-scale system remains a highly prospective exploration asset in a top tier jurisdiction," Goldstrike Resources President and CEO Terrence King said in January.

Newmont's B.C. portfolio is anchored by a 50 percent stake in the world-class Galore Creek project in the mineral-rich northwestern corner of the province.

Newmont bought this half ownership of Galore from Novagold Resources Inc. in 2018 for US$275 million.

Following this acquisition, Newmont and Teck Resources Ltd., which owns the other half of Galore Creek, published an updated resource.

In preparation for an expected 2020 prefeasibility study for developing a mine at this world-class orebody, the Galore Creek partners are carrying out an 18,000-meter drill program this year.

Newmont Goldcorp expanded its Golden Triangle presence this year by investing C$17.6 million to acquire a 9.9 percent stake in GT Gold Corp., a junior exploring a porphyry gold-copper discovery that is showing promise to be large and with respectable grades.

"We are honored to have attracted a candidate with such impressive experience and credentials, and we look forward to leveraging his technical expertise and project leadership experience as we continue to advance our discoveries and exploration at Tatogga," said GT Gold Executive Chairman Ashwath Mehra.

While Harbidge's appointment was not directly related to the Newmont Goldcorp investment in GT Gold, having a former Goldcorp senior VP as president of the junior is likely not a mere coincidence.

Both Goldcorp and Newmont brought interests in earlier staged gold projects across the North into the merged gold miner.

Newmont's contribution includes a 28.5 percent stake in the Doris North Mine on the Hope Bay property in Nunavut. This ownership is through an equity interest in TMAC Resources Inc., which acquired Hope Bay from Newmont in 2013.

The mill at Doris reached commercial production in 2017, but poor gold recoveries has hampered the ability to reach full operating capacity.

TMAC has been working on these issues and has improved both recoveries and mill throughput at Doris. As a result, the 2,000-metric-ton-per-day recovery plant churned out 78,570 oz of gold over the first six months of 2019.

"The Astro project is the result of a successful two-year, US$1.8 million generative alliance with Newmont that demonstrates the synergies of Evrim's generative exploration expertise and Newmont's proprietary exploration technologies," said Evrim Resources President and CEO Paddy Nicol.

Under terms of the alliance, Newmont may elect to earn an 80 percent interest in a designated project by making staged cash payments totaling US$600,000 to Evrim and solely funding exploration until a pre-feasibility study on at least a 2-million-ounce gold resource is completed.

Newmont has also been carrying out generative exploration in Alaska in recent years. This multi-district work turned up Healy, a block of claims a few miles southeast of the high-grade Pogo gold mine in Alaska.

Northway Resources Corp., a new junior, optioned the Healy property from Newmont Goldcorp and is carrying out a maiden drill program on this property in the Goodpaster Mining District this year.

Before the merger with Randgold, there were signs Barrick might increase its foothold in the North.

In 2017, Barrick cut a deal with ATAC Resources Ltd. to earn up to a 70 percent interest in Orion, a Carlin-type gold project in the Yukon, by investing up to C$35 million on exploration at the project over five years.

At the end of 2018, and shortly following its merger with Randgold, Barrick decided to drop its Orion option.

As a result, Barrick's only remaining interest across the North is a 50 percent stake in Donlin Gold, a 39-million-ounce gold project in the Yukon-Kuskokwim region of Southwest Alaska.

While the size of this deposit is definitely world-class and the resource grades, at 2.24 grams per metric ton gold, are fantastic for a deposit of this size, there are questions as to whether the project will meet the high bar set by the new Barrick Gold management.

Novagold Resources President and CEO Greg Lang said the Barrick-Randgold merger puts his company in a win-win situation – either Barrick sees Donlin as a core asset and moves the project forward or sells the world-class gold project to a company eager to realize the potential of this enormous asset.

"There is a reason why our chairman refers to the changes at Barrick as a 'white swan' event!" the Novagold President penned in the company's 2018 year-end financial report.

Reminding shareholders that Novagold has first right of refusal if Barrick does decide to sell Donlin, which gives them a voice in who a new partner would be, Novagold Chairman Thomas Kaplan said either decision by Barrick will raise the profile of Donlin Gold.

"Anything that allows us to have a partner, whether it's Barrick or whomever, will be accretive to us, because we have the best story in the space," Kaplan said.

While the Novagold chairman took the opportunity to address the question, he is not convinced that Barrick would be willing to sell a North American gold asset as well-endowed as Donlin.

"Is there any reason why Barrick should sell it? From my perspective, 'no'," Kaplan said in response to an analyst's question on the topic. 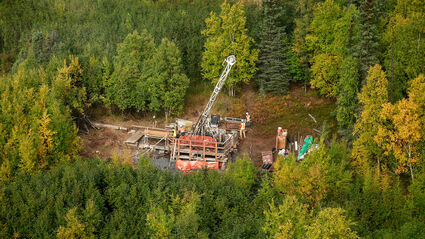 But, he said, the expanded Barrick Gold has a global portfolio of assets to consider and prioritize, and it is ultimately up to that company's merged management team to decide what to do with its half of the Alaskan gold asset.

Time will tell how much of these gold reserves will come from Alaska and Canada's North.