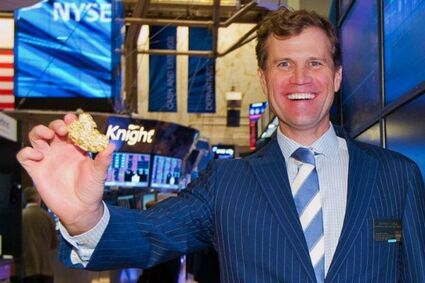 EMX nabbed a foothold in this district that hosts Pogo, a high-grade underground gold mine owned by Northern Star Resources Ltd., when it invested C$1 million to acquire 7.14 million shares of Millrock Resources Inc. early this year.

Prior to the EMX investment, Millrock held West Pogo, an exciting property bordering the Pogo Mine.

Millrock used funds raised from EMX Royalty's investment to expand its land position in the Goodpaster District to around 163,213 acres.

This includes an significant increase in the West Pogo property; a 42,580-acre package of claims covering the Shaw Creek trend, a prospective corridor that extends roughly 19 miles southwest from West Pogo; a 54,340-acre block of claims known as East Pogo that covers the Scott, Boundary, and Cal-Surf prospects; North Pogo, a largely overlooked area of favorable structures and stratigraphy on the north side of the Goodpaster Batholith; and Divide, a block of 67 claims covering gold occurrences and interesting geochemical anomalies about 25 miles southeast of the Pogo Mine.

As part of the deal with Millrock, EMX was granted a royalty on all Millrock properties in the district.

In addition to its deal with Millrock, EMX invested C$350,000 to acquire Corvus Gold Inc.'s net smelter return (NSR) royalty interests on three groups of claims in Goodpaster District and a copper-gold property in the Chistochina Mining District, about 75 miles southeast of Goodpaster.

EMX also acquired Corvus' 3 percent NSR royalty on precious metals and 1 percent NSR on base metals at the LMS claims, a gold exploration property about 20 miles southwest of West Pogo.

EMX will hold a combined 1.5 percent NSR on the newly staked Millrock claims within an agreed upon area of interest in the Goodpaster district.

Beyond the royalties in the Goodpaster district, EMX acquired Corvus' 1 percent NSR on precious and base metals at Chisna, a copper-gold project Millrock acquired from Corvus in 2016.