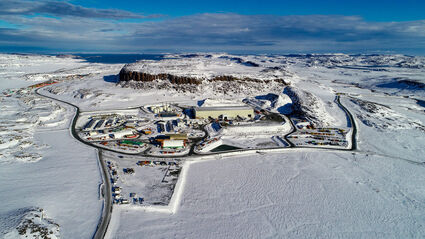 An aerial view of the Doris Mine area on TMAC Resources' Hope Bay gold project in Nunavut.

More than halfway through its third year as a gold producer at the Hope Bay Property in Nunavut, TMAC Resources Inc. is also emerging as a top mineral explorer in Canada's northernmost territory.

The Toronto-based company's Doris Mine at Hope Bay is one of only three producing gold mines in Nunavut. Situated in the Kitikmeot Region in northwestern Nunavut, Doris is the first gold deposit brought into commercial-scale production at the remote mining operation.

For more than 30 years, Hope Bay has attracted seasoned gold hunters, including BHP Billiton Ltd., Miramar Mining Corp., Newmont Mining Inc. and most recently TMAC, which acquired the property in 2012. Three decades later, the explorers invested more than C$1.5 billion in the project for exploration and evaluation, surface infrastructure, and mine and process plant development.

The sustained effort is finally paying off. Since pouring first gold at Doris in early 2017, TMAC has doubled the mine's processing capacity to 2,000 metric tons per day. The company reported record output from Doris of 40,050 ounces for the first quarter of 2019, and despite some processing issues encountered in the second quarter, produced an impressive 78,570 ounces during the first half of the year.

"Hope Bay is an under-explored Archean gold belt despite more than 30 years of activity, because of the remoteness of the site," said TMAC President and CEO Jason Neal. "The focus historically has understandably been on near-surface drilling on the three outcropping deposits at Doris, Madrid and Boston, which have attracted more than 90 percent of the diamond drill meters."

Since the mine's startup at Doris, TMAC has focused on ironing out bugs in processing. This effort delayed the company in turning its attention fully to exploration of the Hope Bay property.

Neal said every previous owner set a goal of establishing a mine at one of the three sizable deposits and using the established year-round production as a foundation on which exploration could be accelerated.

Only TMAC has reached the cusp of executing this vision.

"This year we will take a significant step forward, and on the horizon, there is an opportunity to, in a prudent and disciplined way, further escalate exploration," Neal said earlier this year.

The explorer planned to spend $20 million on exploration in 2019, including drilling 60,000 meters aimed at further exploring the Doris deposit located near the north end of the Hope Bay belt, the Madrid deposit farther south and the Boston deposit located near the southern tip of the belt as well as regional targets both in the north and the south. The drill campaign will be nearly twice the size of the 34,000-meter exploration plan that TMAC carried out in 2018.

"We now have significant reserves and resources established at these deposits, almost entirely within 350 meters of surface and are open at depth, and a practically inexhaustible inventory of exploration targets," Neal said.

TMAC said its focus at Doris is on growing reserves, especially at Doris BTD, supported by extension of the Doris BTD ramp development to the north to provide access to a further 100 meters of strike length.

"We have a great opportunity to add resources and reserves at Doris with an increased focus on exploration, which has the potential to extend the life of Doris and continue to add operational flexibility to our overall plans," Neal said.

The Doris BTD zone is north of and beneath a diabase dyke in the deposit and is the equivalent of the high-grade Doris North zone hinge structure.

The BTD Extension zone remained open for expansion to the north and TMAC continued drilling through the third quarter.

In addition to diamond drilling, production development has now accessed the BTD Extension zone on four levels within the southern extent of the zone. Both vein geometry and fold grade continue to show good continuity on each level.

The recent BTD results, which thus far are largely in areas that will be mined in 2019, show consistent visible gold in high-grade drill hole intercepts.

TMAC said additional drilling is required to determine the relationship of this mineralization to the known Doris Deposit, and if it is a continuation of Doris North BTD Extension or a new mineralized zone. The results, however, represent a significant step-out from the currently defined mineral resources and increases TMAC's confidence in the long-term sustainability of its Doris operations, according to the explorer.

Next on deck: Madrid

Madrid North, expected to be TMAC's next ore source, saw 2019 drilling centered on targets that could be advanced towards development and production.

In 2018 drilling at Madrid North, the company focused on the core of the Naartok West and Naartok East zones and confirmed the continuity of both grade and width of near-surface mineralization, which has potential to provide significant high-grade ore early in the Madrid mine plan.

Activity in 2019 at the Madrid North deposit initially focused on the Suluk zone, with a winter program designed to define the higher-grade plunges within the indicated mineral resource and upgrade classification of the inferred mineral resources. TMAC also used core from this program for metallurgical tests on the Suluk ore. The Suluk stacked mineralized package remains open to depth and has the potential to significantly increase resources down-plunge of the high-grade trends.

"We are planning on conducting advanced exploration (at Madrid North) in preparation for a development and production decision," Neal said. "The Naartok East results are defining a higher-grade zone near surface. The Suluk results inform planning for potential future bulk sample and underground exploration, which is currently being evaluated."

TMAC also plans to conduct a regional exploration program that is focused on established targets near current and planned infrastructure at Doris and Madrid.

"(W)e have more than 90 identified exploration targets on the belt based on a significant amount of foundational work, and as our vision for development at Hope Bay evolves, we are also able to further screen those targets which are most capable of contributing to our medium-term strategy," Neal explained.

More than 7,000 meters of diamond drilling is budgeted this year to test regional targets in the north portion of the Hope Bay belt.

The northern regional drilling, which got underway in May, focused on high-priority exploration targets identified through historical and current exploration efforts. These targets include several anomalies north of the Naartok deposit, the Qaiqtuq target located 2,000 meters northwest of the Doris mine, and a moderate gold-till anomaly in the Qaiqtuq valley.

After completion of the regional work on these northern targets, the exploration transitioned to a late-summer drill program out of the Boston camp.

BHP completed more than 2,500 meters of underground development at Boston in the 1990s as part of a bulk sampling program.

After its 2019 surface exploration plan is completed, TMAC said it will consider opening this underground development and continuing year-round exploration of the deposit from underground.

"Boston may be the best of the currently identified deposits at Hope Bay, and we are enthusiastic about getting drills turning again for the first time in nearly two years," Neal said.

Drilling in the south also focused on high-priority regional targets proximal to Boston, including the Domani trend to the south. The Domani trend is characterized by mineralized quartz veining found within a roughly 6,000-meter-long strongly iron carbonate altered shear zone, up to 40 meters wide extending south from the Boston deposit. Along this trend multiple 10 g/t gold, and up to 200 g/t gold samples have been collected since the mid-1990s. Work on this and other high-priority targets near Boston was scheduled to begin in the third quarter.

TMAC also set a target for updating its pre-feasibility study in the fourth quarter of 2019 "for disciplined Hope Bay Belt development and optionality, with focus on stakeholder value."

In mid-August, TMAC also reported completion of an agreement with Maverix Metals Inc. in which it amended terms of an existing 1 percent net smelter royalty. TMAC will receive gross proceeds of US$43 million and Maverix will get an additional 1.5 percent NSR, a short-term 0.25 percent NSR until the additional 1.5 percent royalty is registered against the property and small equity interest in TMAC. The royalty amendment also includes negotiated step-down and buyback rights in favor of TMAC.

"We determined this royalty transaction to be the most attractive cost of capital, preserves the best participation in strengthening gold prices for our shareholders, and importantly has the benefit of maintaining both financial and strategic flexibility," Neal added. 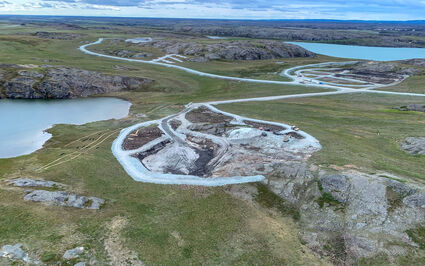