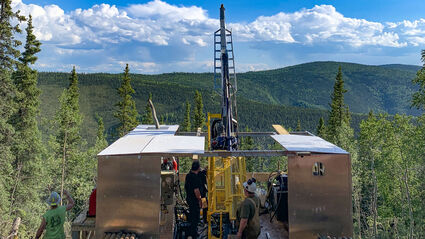 With diamond drills turning at three different properties in west-central Yukon this field season, along with rotary air blast drilling, soil sampling and other activities, White Gold Corp. is one of the busiest mineral explorers in the region, if not the entire territory.

The Toronto-based junior, backed by partners Agnico Eagle Mines Ltd. and Kinross Gold Corp. – each owning 20 percent of the company – said it would spend C$13 million in 2019 exploring a huge land package, which covers 22,040 mining claims across 35 properties totaling more than 439,000 hectares (1.085 million acres) or 40 percent, of the White Gold District.

"I figure over the next two years, the company will hit that 2-million-ounce mark at the project," Ryan predicted.

White Gold's 2019 program includes diamond drilling 10,000 meters on its JP Ross property, 6,000 meters on the flagship White Gold project and 1,000 meters at the QV project, which it acquired in March from Comstock Metals Ltd.

Follow-up RAB and reverse circulation drilling confirmed and expanded the discovery, with the best intercept of this work yielding 82.3 meters grading 3.21 g/t gold, including 1.52 meters of 103.9 g/t gold and 400 g/t silver from surface in hole JPRVERRC18-006.

In all, White Gold identified at least 12 mineralized structures in 2018 at Vertigo across a 2,200-meter by 650-meter trend.

While drilling at Vertigo focused on evaluating the geometry as well as the lateral and vertical continuity of the high-grade mineralized structures in the discovery, another 6,000 meters of core drilling at White Gold targeted previously underexplored portions of the Golden Saddle deposit and surrounding area.

At Vertigo, all diamond drill holes completed by early August intersected gold mineralization and identified a minimum of six high-grade mineralized structures. Each structure displays strong continuity from surface to more than 250 meters down-dip and remains open in all directions, the explorer reported.

Among the best results at Vertigo:

At Golden Saddle, White Gold said the drilling extended the GS Main Zone 205 meters down dip from historic drilling, roughly doubling the down-dip extension in the area, which previously only extended to 165 meters; added additional mineralization above the previously modeled ore body; and infilled several strategic gaps in the resource model. Diamond drilling on the GS West Zone proved continuity of the deposit both along strike and down dip, expanding the modeled mineralization beyond the envelope included in the company's 2019 mineral resource estimate.

"At the Vertigo, we have confirmed the existence of multiple structures with high-grade gold mineralization that display strong continuity along strike and at depth. These results are very encouraging for an initial diamond drill program and validate our current interpretation for the Vertigo," said Jodie Gibson, White Gold's vice president of exploration. "The initial results at Golden Saddle are among the best holes drilled to date and significantly expand the high-grade mineralization within and beyond the current Golden Saddle resource boundary. This is all alongside our regional exploration program, which continues to generate a strong pipeline of exciting new targets further demonstrating the district scale opportunity across our unique portfolio of assets."

At the QV project, which is contiguous with the White Gold property across the Yukon River, the company hopes to increase a 230,000 oz inferred mineral resource through 1,000 meters of diamond drilling, along with other activities. Exploration at QV, which covers 16,335 hectares (40,000 acres), is focused on testing strike extensions of the historically underexplored VG deposit.

White Gold said large portions of the QV property remain unexplored, which leaves a strong potential for the discovery of additional zones of structurally-controlled and intrusion-related mineralization in several targets with similar characteristics to Golden Saddle and Vertigo. Some 4,300 meters of diamond drilling over 23 holes had been completed on VG by August. Of these, only 17 holes formed the basis of the 2014 maiden resource estimate of 230,000 oz gold within 4.4 million metric tons grading 1.65 g/t gold in the inferred category at a cut-off grade of 0.5 g/t gold.

The VG resource is open along strike and at depth, and has similar mineralization and structural control to nearby Golden Saddle.

White Gold Corp. also conducted extensive soil sampling on JP Ross, White Gold and other regional properties. A total of 17,100 soil samples had been collected across the JP Ross and White Gold properties in the 2019 exploration program, the company reported Aug. 22. The soil samples are interpreted as being in-place and representative of the bedrock below due to the unglaciated nature of the area, indicating high-priority targets for upcoming follow-up activity, including probe, trenching and RAB/RC drilling, the explorer said.

"JP Ross property now has at least four recognized gold trends over a 15-kilometer-by-15-kilometer area, including the Vertigo, Stage Fright, Sabotage and Frenzy Trends, as well as additional emerging targets on underexplored portions of the property," White Gold said.

At the White Gold project, the company said it collected 4,560 soil samples across seven targets, including six samples assaying more than 1,000 ppb gold, 14 samples of greater than 500 ppb gold, and 201 samples with more than 100 ppb gold. 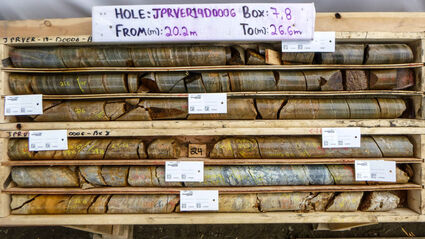 This core from one of the 2019 holes at Vertigo includes a 1.1-meter intercept that averages 9.58 g/t gold.

"The White Gold property trend is now identified to be a 12-kilometer by up to 4.5-kilometer northwest trend of anomalous gold in soils with at least 11 distinct target areas; including the Golden Saddle and Arc deposits," Gibson said.

"This year's soil sampling program was designed to pin down anomalous structures on both the JP Ross and the White Gold properties. ... The results were even better than expected with some beautiful linear soil anomalies 20-30 meters wide, (and) some running up to 750 meters long showing up, where previous 50-meter space soil sampling barely gave us any indications. ... The gold soil anomalies produced from these detail and mini grids will be followed up by GT Probe lines and trenching, with the intent to RAB drill up to 35 holes on the JP Ross and up to 25 holes on the White. I look forward to the next round of drilling as we will be targeting the highest probability areas of our newly defined gold anomalies," Gibson explained.