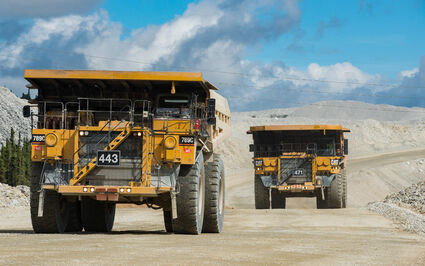 Kinross has outlined enough reserves at its Fort Knox Mine in Alaska to keep these trucks hauling ore until at least 2027 and the company continues to add to resources around the pit and across the wider property.

Kinross Gold Corp. focuses its in-house exploration on high-quality brownfield projects and the discovery of new resources within the existing footprint of several of its mine properties, including extensions of known mineralization, as well as looking at other properties in surrounding districts.

The Fort Knox Mine in Interior Alaska is an example of the Toronto-based gold miner's brownfield success. In its 23rd year of operation, this open-pit mine a few miles north of Fairbanks is now 15 years past the original mine plan and still has enough gold in reserves to last until 2030.

These 11 years of reserves are largely found at Gilmore, an expansion project immediately west of the open pit currently being mined at Fort Knox.

The initial phase of expansion into the Gilmore project area is expected to extend mining at Fort Knox to 2027 and gold recovery from heap leaching to 2030.

With Kinross continuing to find new stores of gold on the property, including extensions of Gilmore, there are good indications that Fort Knox will remain an Interior Alaska gold producer beyond 2030.

During 2018, the company completed roughly 11,000 meters of drilling on the Fort Knox property.

Much of this drilling targeted East Wall, an expansion area on the opposite side of the pit from Gilmore.

All 20 holes drilled in the East Wall area last year tapped grades similar to those currently being processed through the mill or stacked on the heap leach pad at Fort Knox. One intercept, however, stands out amongst the rest. At a depth of 399.3 meters, hole FFC18-1768 cut 33.5 meters of 2.18 g/t gold.

Western extensions of Gilmore and the bottom of the pit were other targets drilled last year.

Kinross is continuing to explore the East Wall target and western extension of Gilmore in 2019.

The company also continues to have drills turning at Gil-Sourdough, a satellite deposit about seven miles northeast of the mill.

According to the most recent calculation published by Kinross, Gil-Sourdough hosts 29.5 million metric tons of indicated resource averaging 0.56 g/t (533,000) oz. of gold.

Another facet of Kinross' exploration strategy is to maximize its exposure to promising greenfield opportunities through mutually beneficial partnerships with high-quality junior exploration companies.

Through this investment in juniors, the Toronto-based major owns a 6.5 percent stake in Victoria Gold Corp., owner of the newest large-scale gold mine in the Yukon. This mine, Eagle Gold, is modelled largely after the heap leach portion of Fort Knox.