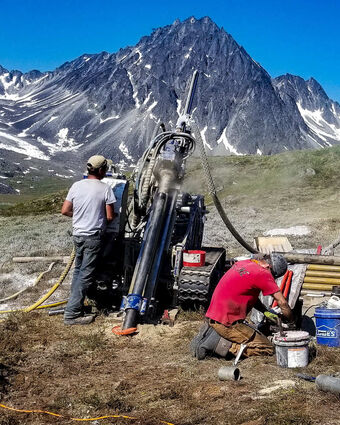 Nova Minerals' 2019 drilling outlined 2.5 million oz of gold at the Oxide Korbel target on the Estelle property in Alaska .

Nova Minerals' 2019 exploration focused primarily on testing the district-scale gold potential in the Oxide area at the north end of the roughly 18-mile-long Estelle property.

Mapping and sampling carried out in 2018 identified two targets at Oxide – Oxide North and Oxide South – that show similarities to the intrusive-related gold deposits being mined at Kinross Gold Corp.'s Fort Knox Mine near Fairbanks and Victoria Gold Corp.'s Eagle Gold Mine in the Yukon.

As the result of an accelerated induced polarization (IP) geophysical survey and drill campaign carried out this year, Nova made significant headway toward reporting an initial Australian Joint Ore Reserves Committee- (JORC) compliant for Oxide Korbel, a new occurrence in the Oxide area at the north end of the roughly 18-mile-long Estelle property.

"The speed of IP completion, drilling and our commencement of the resource estimation report shows the commitment by all involved to unlock the potential at the under-explored highly prospective Estelle gold project which we believe to be the next globally significant gold camp," Nova Minerals Managing Director Avi Kimelman said in August.

Oxide Korbel is a prospect area that roughly covers the area previously referred to as Oxide Ridge.

This hole lies in the southeast corner of what Nova now refers to as Oxide Korbel Resource Block A.

SE12-04, drilled about 450 meters southeast of the discovery hole in 2012, cut 41.5 meters averaging 1.1 g/t gold, indicating the drilling was vectoring toward higher gold grades as it approached a strong geophysical anomaly further southeast.

This hole is within Oxide Korbel Resource Block B.

The results from the drilling at Oxide Korbel were used to calculate an inaugural JORC-compliant inferred resource.

These grades are similar to the 267.6 million metric tons of reserves averaging 0.4 g/t (3 million oz) gold at a Kinross Gold Corp.'s Fort Knox Mine near Fairbanks, Alaska.

Nova said the Oxide Korbel mineralization remains open and a major drill program is being planned to target potential extensions.

In addition to Oxide, Nova is carrying out exploration at Shoeshine, an area about 10 miles to the south that covers the Mount Estelle, Train and Shoeshine prospects; and RPM, which covers the Revelation and RPM prospects at the south end of the property.