The Smithsonian and its golden beginning

How a wealth of science was established with shrinking money North of 60 Mining News – July 10, 2020 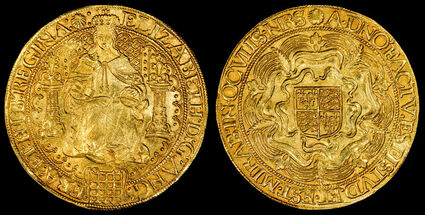 The sovereign is a beautiful gold coin of the Kingdom of England first issued in 1489 under King Henry VII. These half-troy-ounce coins were originally 23 carat (93.83%) gold.

Next year will mark the 175th anniversary of one of the greatest institutions in the world – the Smithsonian in Washington D.C. and certainly the pride of our nation's capital. The patron of this American Institution was a geologist who willed its creation with $500,000 in gold despite the fact that he had never stepped foot in the United States. The story behind the Smithsonian is an interesting one, but the gold that funded its founding tells an equally intriguing tale of five centuries of currency debasement.

Let's begin with the Smithsonian.

June 27, 1829 marked an auspicious beginning of what would become the Smithsonian Institute, one of the world-renowned institutions of knowledge. It is also known as "the nation's attic" for its eclectic holdings of 154 million items in 19 museums, 21 libraries, nine research centers and one zoo, as well as other historical and architectural landmarks ... and that's just in Washington D.C.! There is more scattered around most of the other 50 states and a few other locations around the world. Wow, that's a lot of science and history! How did this massive wealth of science and history come about?

After a long illness, the English scientist James Smithson died on June 27, 1829 in Genoa, Italy. He left behind a will with a seemingly odd footnote. In the event that his only nephew, Henry James Dickenson, died without any heirs, Smithson decreed that the whole of his estate would go to the United States of America, to found in Washington D.C. the Smithsonian Institution, an establishment "for the increase and diffusion of knowledge".

Smithson's bequest was indeed curious because he had never visited the United States. This both surprised and delighted the Americans and created an awkward situation for the Brits who would have just as soon kept the donation in-country. After all, Smithson had been a fellow of the respected Royal Society of London from the age of 22, publishing numerous scientific papers on mineral composition, geology, and chemistry. In 1802, he overturned popular scientific opinion that calamine was an oxide of zinc metal by proving that it was a zinc carbonate mineral instead, which of course resulted in this important brass forming ore mineral of zinc carbonate being later named smithsonite in his honor.

So why would he leave his fortune to the Americans?

To answer this, we must go back a little more in history. James Smithson was born in 1765 in Paris with the French name Jacques-Louis Macie (later altered to James Louis Macie). He was the illegitimate son born in secret in Paris to Elizabeth Hungerford Keate Macie and Hugh Percy, the 1st Duke of Northumberland. Ah, the plot thickens! In 1766, his mother inherited her wealth from the Hungerford family of Studley, England. Jacques-Louis was obviously very bright and was well educated coming from wealth on both sides of his family – albeit illegitimate. After his mother died in 1801, he and his brother inherited her wealth and Jacques changed his last name to Smithson, the original surname of his biological father the Baronet Hugh Smithson, who himself had changed his surname to Percy when he married Lady Elizabeth Seymour, already a baroness and heiress of the Percy family wealth – one of the leading landowning families of England.

James Smithson was educated and eventually naturalized in England. He attended the prestigious Pembroke College, Oxford in 1782 and graduated in 1786 with a Master of Arts degree. He collaborated with many of the top scientists at the time and made good money working with the Blackfriars glass makers business. He published twenty-seven papers and was nominated to the Royal Society of London by Henry Cavendish (the discoverer of hydrogen fame) and was made a fellow in April 1787. Although accepted by the scientific community for his brilliance and acumen, Smithson was never received into upper British society, never invited to soirees or dinner parties or any events attended by the lords and ladies because of his illegitimate beginnings ... sins of the father! This never sat well with Smithson and resulted in him thumbing his nose at the British aristocracy one last time.

Six years after his death, his nephew, now Henry James Hungerford (yes, Hungerford – it was a condition of his inheritance that his half-brother's son change his name from Dickenson to his mother's maiden name), died without children, and on July 1, 1836, the U.S. Congress authorized acceptance of Smithson's gift. President Andrew Jackson sent diplomat Richard Rush to England to negotiate for transfer of the funds, and two years later Rush set sail for home with 11 boxes containing 104,960 gold sovereigns, eight shillings, and seven pence, as well as Smithson's mineral collection, library, scientific notes, and personal effects.

After the gold was melted down at the national mint in Philadelphia, it amounted to a fortune worth just over $500,000. After considering a series of recommendations, including the creation of a national university, a public library, or an astronomical observatory, Congress agreed that the bequest would support the creation of a museum, a library, and a program of research, publication, and collection in the sciences, arts, and history. On August 10, 1846 the act establishing the Smithsonian Institution was signed into law by President James K. Polk.

In looking into the background and history of the Smithsonian, I also took note of Smithson's half-million-dollar start-up funding. That Smithson was a geologist was particularly gratifying to me, but then I got to thinking about the value of that gold today – $500,000 in 1836.

To look into this, we first have to understand what a British gold sovereign represents – a beautiful gold coin from the Kingdom of England first issued in 1489 under King Henry VII. The first sovereigns were of 23-carat or approximately 95.83% gold – probably the best they could make at the time, and weighed one half a troy ounce. Royal decree lessened the gold content to 22 carats (91.67%) an event known as "The Great Debasement". This act was the first official currency debasement policy introduced in 1544 by order of the narcissistic, self-important King Henry the VIII, which saw the amount of precious metal in gold and silver coins reduced, and in some cases replaced entirely with much cheaper base metals such as copper. Afterall, Henry VIII had to pay for his lavish lifestyle, six wives and fund foreign wars with France and Scotland. The main aim of the policy was to increase revenue for the Crown at the cost of taxpayers through savings in currency production with less bullion being required to mint new coins ... sound familiar?

At any rate, 22 carat gold became the gold coin standard in both the British Isles and later the United States, and in 1836 a gold sovereign represented approximately a half ounce of "gold" (remember the debasement which started in 1544). Therefore, Smithson's 104,940 sovereigns, each containing a half ounce of "gold" (52,480 ounces) should be worth just over $1,000,000 in 1836 – the price of an ounce of gold at the time was pegged US$20.67. The official records, however, states clearly that this trove was only worth $500,000 in 1836 dollars ... WHAT!? This has to mean that those damn Brits were putting nearly 50% of less valuable metals (copper, zinc, kitchen sink?) into their shiny British gold sovereigns by the time 1836 rolled around. No doubt the honest folks at the Philadelphia treasury had to report what it was worth in gold backed US dollars in 1836 at the $20.67 fixed gold price.

First of all, the Smithsonian must be worth a hell of lot more than $91 million! One certainly could not build the 19 museums, 21 libraries, nine research centers and a zoo, let alone acquire the 154 million items for anything close to that amount. In fact, I'll bet the $91 million is closer to the annual maintenance cost. But consider this, that $500,000 represents a 18,200% increase in dollar value of gold over 184 years or 100% increase per year! Wait, what!?

To understand what you could do back in 1836 with $500,000 bucks and what it means now, take a look at the official government website CPI Inflation Calculator at https://www.officialdata.org/us/inflation/1836 and in the graphic below.

You can see we did pretty good at not debasing our currency for over a hundred years with only a few hiccups during the Civil War and the Great Depression where we adjusted the value of a dollar to a higher gold price – $35/oz .... but then, what happened? That's right, President Nixon took us off the gold standard on August 15, 1971 and we went to a floating exchange rate to the dollar ... and we printed them like crazy! 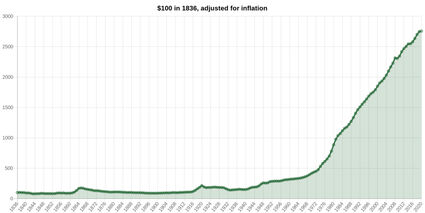 It would take US$2,757 to buy the same amount of goods US$100 would buy in 1836. The steep climb on the chart shows the rapid erosion of the value of the dollar since 1971, when President Nixon took the U.S. off of the gold standard.

You see, back in 1913 the elite of the time met secretly in a place called Jekyll Island (seriously, you couldn't meet clandestinely in a less scary place?) and created the Federal Reserve and Central Banking which essentially allowed the Federal Reserve to create and issue debt to finance federal spending. Later in 1944, the elite met again at Brenton Woods, New Hampshire (friendlier sounding place this time around) and organized the New World Order (their words) where all major currencies were tied to gold and where the US, having the largest amount of gold reserves at Fort Knox (recall, President Roosevelt forced everyone to sell their gold to the US government in 1933 for $20.67/oz and then re-priced it two years later to $35/oz) and so began the global hegemony of the dollar ... and so we continued printing and we haven't stopped!

Now, countless recessions, bailouts, Quantitative Easing's and Tightening's, Great Recessions and a Global Pandemic later and the Central Banks (not just ours, the entire G7 + China) are printing money like nobody's business. You see for bankers, the solution to debt is simply more debt! That's what a good friend of mine calls Genuine Jiggery Pokery!

It's too bad our Central Bankers and politicians have lost sight of Smithson's clear vision "for the increase and diffusion of knowledge".