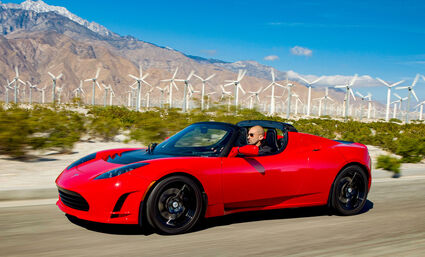 A Tesla Roadster races past wind turbines in California. Both electric vehicles and wind turbines will require considerably more copper than their combustion counterparts.

Considering the global shift to low-carbon energy and electric mobility, copper is the most vital metal not on the United States Geological Survey's list of 35 minerals and metals considered critical to America's economic wellbeing and security.

Copper's importance is due to the rapidly emerging electric vehicle, wind turbines and photovoltaic (PV) solar technologies need a lot more copper than the combustion cars and power plants they are replacing.

It is estimated that the average fully electric car contains around 180 pounds of copper, which is roughly four to 10 times more than the 18-49 lb in a conventional internal combustion vehicle.

Annual sales of light duty electric cars and trucks traveling global highways is expected to expand from 1.7 million in 2020 to more than 26 million by 2030. This means that electric vehicles alone will need about 4.7 billion pounds of copper per year.

While electric cars are going to play a role in driving up copper demand, the EV sector only tells a fraction of the tale. The growing amount of electricity needed to power these vehicles, the push for greener sources of that electricity, and a growing urban populace that requires more electricity per capita contributes much of the rest of this story.

Renewable energy power generation, such as solar and wind, requires approximately five metric tons of copper for every megawatt-hour of electric generation, which is around five times more copper than traditional power sources, such as coal and natural gas.

World Bank Group estimates that the world will need roughly 550 million tons of copper for generating and transmitting electricity over the next 25 years, which is about the same amount as humans have produced in the past 5,000 years.

While Alaska does not currently have a copper producing mine in operation, it is a past supplier of this critical electric conductor and has billions of pounds in deposits ready to deliver this green metal to world markets in the coming years.

And many of these copper deposits have the potential to produce significant quantities of other minerals and metals that are on the USGS critical list. Barite, cobalt, germanium, gallium, rhenium, tellurium, tungsten, and platinum group metals are among the critical commodities found in some of Alaska's advanced copper exploration and development projects.

Porphyry deposits, which are typically relatively low-grade but large, supply the bulk of the world's newly mined copper. And Alaska hosts the largest undeveloped porphyry copper deposit known to exist on Earth – Pebble.

The USGS also believes Pebble hosts an "enormous tellurium endowment at the Pebble" but a resource has not been calculated to quantify this critical solar panel metal.

Pebble Partnership, the company moving forward with developing a mine at this world-class porphyry deposit, is currently working toward securing the permits for an operation that is expected to produce 5.74 billion lb of copper, 6.4 million ounces of gold, 260 million lb of molybdenum and 32 million oz of silver over a 20-year mine life.

It is currently unclear whether the rhenium or tellurium – both on the list of 35 minerals and metals considered critical to the United States – would be recovered. Both metals will be included in the copper and molybdenum concentrates shipped from Pebble, but the recovery of these critical metals would largely be determined by the refineries capacity to do so.

Pebble is not the only advanced copper exploration project in Alaska that has healthy quantities of critical byproduct metals.

Bornite and Arctic, the two most advanced deposits at the Upper Kobuk Mineral Projects (UKMP) in the Ambler Mining District of Northwest Alaska, hosts roughly 9 billion lb of copper, along with other base, precious and critical minerals.

Arctic, which is in the early stages of permitting, hosts roughly 2.5 billion lb of this copper, along with zinc, lead, gold, and silver.

The largest copper prize identified so far in the Ambler Mining District, however, is Bornite.

According to the most recent resource calculation, Bornite hosts roughly 6.4 billion lb of copper and 77 million lb of cobalt, a critical metal used in the lithium-ion batteries powering EVs.

Bornite also carries at least two other critical minerals – germanium and gallium – though the concentrations and recoverability of these technology metals has yet to be determined.

While Arctic is the most advanced copper-rich volcanogenic massive sulfide deposit in Alaska, it is not the only such deposit tracking towards development in the state.

While best known as rich stores of precious and base metals, the deposits outlined so far at Palmer contain around 3.8 million metric tons of barite. This is more than 25% of the entire weight of the deposits that also happen to carry 1.6 billion lb zinc, 278 million lb of copper and 25 million oz of silver.

Palmer project partners Constantine Metal Resources Ltd. (51%) and Dowa Metals & Mining Co. Ltd. (49%) are investigating the potential of selling the barite as a co-product to the base and precious metals that would be extracted if a mine is developed there.

In mid-2019, Constantine published a preliminary economic assessment that considers an underground mine providing ore for a 3,500-metric-ton-per-day mill that would produce 1.07 billion pounds of zinc, 196 million lb of copper, 18 million ounces of silver, 91,000 oz of gold and 2.89 million metric tons of barite over an initial 11-year mine life.

Considering that Palmer is only about 45 miles from a Pacific Rim port and the barite would be handled as part of the mining process, this critical industrial mineral has the potential to add an important revenue stream to any future operation developed at the VMS project.

The Palmer partners have scaled back field work at Palmer this year due in large part to the coronavirus outbreak.

"Although 2020 is a period of reduced project expenditures and challenges due to the COVID-19 pandemic, the CMJV (Constantine Mining Joint Venture) continues to make meaningful progress to advance the project towards underground exploration and feasibility studies," said Constantine Metal Resources President and CEO Garfield MacVeigh.

In addition to the copper projects at or nearing permitting, Alaska is home to an abundant portfolio of the porphyry, carbonate-hosted, and VMS deposits rich in this energy metal.

In recent years, several porphyry deposits in Alaska have drawn the interests of some of the world's largest mining companies looking for stores of copper similar to Pebble.

This includes Freeport-McMoRan, owner of one of the largest operating gold-copper mines on Earth, which is investigating Tanacross, a porphyry copper-gold project that lies right against Alaska's border with Canada's Yukon Territory.

"Geologically speaking, the property has the right ingredients to host a significant mineral deposit – it sits on the intersection of two major crustal structures, has a large geophysical and geochemical expression, and the mineralized intrusions are the right age," Kenorland Minerals President Zach Flood told Mining News.

Early in 2018, South32 entered into an option agreement to acquire up to 70% in Freegold Ventures Ltd.'s Shorty Creek porphyry deposit about 75 miles northwest of Fairbanks.

Though still in the early stages of exploration, Shorty Creek shows the thick zones of copper and other metals that intrigue the world's largest mining companies.

While not as valuable as the copper and the gold in the emerging deposit, the tungsten grades at Hill 1835 could provide a source of this critical metal as a by-product.

South32 has agreed to invest up to US$10 million to explore the porphyry potential at Shorty Creek over a four-year span.

PolarX Ltd., an Australia-based junior, is also on the hunt for large porphyry deposits in Alaska.

This company has already outlined a high-grade skarn deposit, often found on the periphery of porphyries, with 90.4 million lb of copper, 213,000 oz gold and 1.5 million oz of silver.

This skarn, known as Zackly, lies in the middle of a 7.5-mile- (12 kilometers) long structural corridor running across its Alaska Range property that is bookended by the Mars and Saturn porphyry gold-copper prospects.

USGS and Alaska Division of Geological & Geophysical Surveys have identified several areas of the state prospective for carbonate-hosted copper deposits. 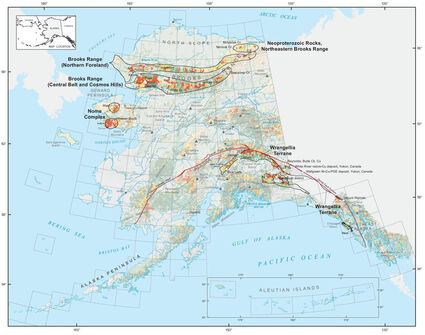 A geospatial tool developed by the federal and state agencies found that almost the entire length of the Brooks Range, mountains that separate the oil-rich North Slope from the rest of the state, to be a good place to look for this style of copper deposit that sometimes carry cobalt, germanium and gallium.

In addition, the USGS study identified two areas of the Seward Peninsula in western Alaska and the Wrangellia terrane, a distinct belt of rocks along much of the southern slopes of the Alaska Range, as prospective for carbonate-hosted copper deposits similar to Trilogy Metals' Bornite project.

And exploring for these deposits could turn up critical metals such as rhenium, tungsten and the host of other critical minerals and metals that often come along with the copper needed to power the world's electrical future.