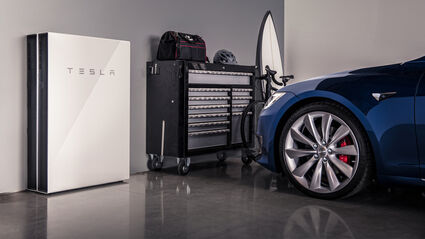 The rapidly accelerating expansion of the electric vehicle and renewable energy sectors is driving enormous new demand for graphite, a major ingredient in lithium-ion batteries.

The World Bank forecasts that low-carbon energy technologies, primarily lithium-ion batteries, will require 4.5 million metric tons of graphite per year by 2050, which is about a 500% increase over 2018 levels and a 318% increase over the total graphite produced in 2019.

"Graphite demand increases in both absolute and percentage terms since graphite is needed to build the anodes found in the most commonly deployed automotive, grid, and decentralized batteries," the World Bank penned in a 2020 report, "The Mineral Intensity of the Clean Energy Transition."

According to "Mineral Commodity Summaries 2020," an annual report published by the United States Geological Survey, there are currently no graphite mines in the United States, a dearth that required American manufacturers to import 58,000 metric tons of this carboniferous battery mineral during 2019.

When it comes to spherical graphite, a special form of the material used as the anode in lithium-ion batteries, China was the only commercial-scale producer in 2019.

Gigafactory 1, an enormous facility in Nevada that is producing lithium-ion batteries powering the cars coming off Tesla's North America assembly-lines, is going to need hefty supplies of spherical graphite.

Once complete, this 10-million-square-foot factory is going to need around 35,200 tons of spherical graphite per year and the iconic electric automaker has just broke ground on a much larger gigafactory in Texas.

Tesla CEO Elon Musk has hinted the new gigafactory near Austin could be built out to the terawatt scale, which means it would have upwards of 30 times the battery making capacity of Gigafactory 1.

And Tesla is not the only automaker vying for graphite and other battery metals. With every major carmaker adding electrified models to their lineup, the number of EVs being built each year is expected to expand from about 2 million this year to more than 25 million by 2030 and 55 million by 2040.

And each of these facilities are going to need, preferably regional, supplies of graphite and the other lithium-ion battery materials.

Understanding that this project could be an important link at the beginning of the U.S. lithium-ion battery supply chain, Alaska Gov. Mike Dunleavy nominated Graphite Creek as a as high-priority infrastructure project under Executive Order 13766, a directive by President Trump to strengthen the U.S. economy by expediting the permitting of infrastructure projects.

Graphite Creek already hosts a globally significant deposit that could feed anode material into the lithium-ion battery supply chain for decades. The deposit outlined by drilling so far, however, is but a small fraction of the thick lenses of graphite surfacing along a 11-mile-long stretch of the Kigluaik Mountains on Graphite One's property about 35 miles north of Nome, Alaska.

In addition to world-class size, the graphitic carbon at Graphite Creek has unique characteristics that make it ideally suited for batteries and other high-tech applications.

When testing Graphite Creek material, Graphite One was pleasantly surprised to find that much of the graphite in the Alaska deposit is naturally spherical and possessed other unique attributes.

The company coined the acronym STAX to describe the distinctive spheroidal, thin, aggregate, and expanded properties of the graphite in the Graphite Creek deposit – characteristics that may make the material well-suited for numerous high-tech, renewable energy and military applications.

Testing found that more than 74% of the STAX flake graphite could be turned into spherical graphite without milling.

This is a monumental achievement considering that only about 40% of the best-performing flake graphite found in any other known deposit can be converted to spherical graphite, even using high-end equipment.

The shape would be of little consequence if the material did not perform well in batteries and STAX graphite as the anode in lithium-ion cells demonstrated a first discharge capacity at or near the theoretical maximum for natural, uncoated spherical graphite.

Discharge capacity is a measure of a battery's energy storage capability once first charged.

Graphite One says this ability to reach and closely approach what is currently believed to be the discharge capacity limit, coupled with the capacity to consistently maintain high values on cycling demonstrates the high-performance potential of the STAX graphitic carbon.

"From the time we identified the unique mineralization of our STAX graphite, we've observed a number of potential performance advantages," said Graphite One Resources President and CEO Anthony Huston.

To further test the advantages STAX has to offer, Graphite One shipped roughly 12,000 pounds from surface sampling at Graphite Creek to a United States-based industrial partner for processing into advanced graphite materials.

Testing by this unnamed partner confirmed that spherical graphite made from STAX material performed well as a lithium-ion battery anode and maintained strong performance after 170 charge-discharge cycles, adding further confidence in the potential for STAX as an anode material.

In addition to a good candidate for a domestic source of lithium-ion battery anode material, the recent testing shows that the unique properties of STAX graphite is well suited for other high-tech, industrial, and defense applications.

To fully take advantage of all the attributes STAX has to offer, Graphite One has opted for a processing flow sheet that purifies the Graphite Creek concentrates in the beginning. While opposite of what is done at other graphite operations, this inverted purification flow sheet would allow the company to redirect all the material that is not ideal for rechargeable battery anode material toward other value-added applications.

• Two non-spherical STAX products with grades topping 99.99% graphite have shown to work well as a conductivity enhancer when added to the cathodes of alkaline batteries.

• Thermally purified STAX graphite has been turned into an expandable flake product, which was subsequently formulated into fire retardant foams capable of extinguishing Class B – burning oil, gasoline, diesel, and aviation fuel – fires.

• Purified versions of STAX material have also been converted into synthetic diamonds that could be used for metal working applications, such as pigments for lapping compounds and ultra-hard coatings on drilling, cutting, and grinding equipment.

The next stage of testing will involve doping large synthetic diamonds with elements to produce next-generation semiconductor materials that could replace silicon wafers in critical applications and high-temperature applications.

"All of the above examples of potential upsides coupled with Graphite One's smart design choices and selection of an environmentally responsible processing flow sheet further support the value of the Graphite Creek deposit and the upcoming PFS (prefeasibility study) that will be unveiled within the next few months," Huston said earlier this year.

The coming PFS will follow-up on a 2017 preliminary economic assessment that provided a first look at the engineering and economic parameters of a future mine at Graphite Creek.

This envisioned a roughly 2,800-metric-ton-per-day processing facility at Graphite Creek that would produce 60,000 metric tons of graphite per year.

This new expanded and higher-grade resource will be incorporated in the coming PFS.

This higher level economic and engineering study will further investigate plans to ship concentrates from Graphite Creek to an advanced material processing facility that would refine them into both coated spherical graphite for lithium-ion batteries and purified graphite powders for other applications.

To help with search for a viable Alaska locale to build the advanced graphite processing facility, Graphite entered into a memorandum of understanding with the Alaska Industrial Development and Export Authority. 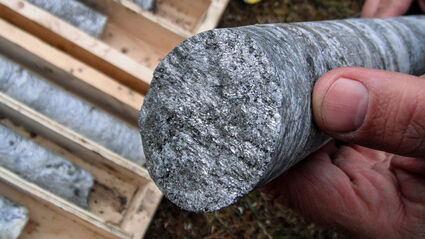 Core from drilling into the Graphite Creek deposit in western Alaska. The STAX graphite found here is being tested for a wide array of potential high-tech and industrial applications.