Rare earths includes 15 lanthanides elements found near the bottom of the periodic table, plus scandium and yttrium.

Due to their vital importance to American manufacturing and the fact that 100% of U.S. supply comes from overseas, primarily China, rare earth elements top the list of minerals and metals deemed critical to the United States.

USGS considers the U.S. as fully reliant on imports for its rare earth needs, which is seemingly paradoxical to the fact that Mountain Pass mine in California's Mojave Desert produced roughly 26,000 tons of these 17 critical minerals last year.

Well, almost produced these elements. The operation produced concentrates from the mined ore and then shipped those to China to separate the contained rare earths into useable metals.

Aside from a Malaysian plant operated by Australia-based Lynas Corp., all rare earth separation facilities are currently located in China.

This gets to the heart of why rare earths are mined in the U.S., yet the country is 100% dependent on imports for the metals.

The U.S. has been unable to compete with the slipshod environmental standards, low wages, and government subsidies applied to the rare earth sector in China. This leaves American manufacturers with one option – buy rare earth metals and compounds from overseas.

"The lack of U.S.-based operational REE separation capacity presents a serious vulnerability to U.S. national and economic security and the security of its allies, as REEs are critical for defense technologies, electric vehicles and U.S. economic growth plans," said Ucore Rare Metals Inc. Chief Technical Officer Gareth Hatch. "Without the downstream capacity to separate and purify REEs, the U.S.A. and its allies are vulnerable to potential supply disruptions, price spikes and trade disagreements related to REEs."

This vulnerability is not lost on President Donald Trump and Pentagon officials, who are looking at ways to establish a domestic mines-to-magnets REE supply chain to break America's dependence on China for these critical elements.

See COVID exposes chink in US metal armor on page 8 of this magazine for additional details on the federal initiatives to establish a domestic REE supply chain.

Ucore Rare Metals hopes to play a role in reconciling America's rare earth paradox with the establishment of an REE mine and separation facility in Southeast Alaska.

So, what exactly are rare earths? While they are traditionally talked about as a single unit, they are actually 17 separate elements, each with its own distinct traits.

Most REE deposits contain some mixture of all the elements considered rare earths, which includes 15 lanthanides – the group of elements in their own row at the bottom of the periodic table –along with scandium and yttrium – a pair of elements that are commonly found in REE deposits and have similar characteristics.

The lanthanides are divided into two categories, heavy and light rare earth elements.

Light REEs make up the first seven elements of the lanthanide series and include lanthanum, for which the series gets its name; cerium, used for polishing high quality optical surfaces; praseodymium, valued for its magnetic and optical properties; and neodymium, an extremely magnetic element.

"The most powerful magnet known to man is a neodymium magnet, one of the rare earths, so all electric cars have neodymium magnets in the electric motors," said Michael Silver, CEO of American Elements, a Los Angeles-based distributor of rare earths and other advanced materials.

The remaining eight lanthanides are considered heavy REEs, which are less abundant in most deposits and tend to be more valuable.

Some of the most commonly used of these heavy rare earths are europium, used primarily in red and blue phosphors in televisions and computer monitors; terbium, used in high-temperature magnets and to create a green phosphor; and dysprosium, which improves the durability of magnets in electric vehicle motors and wind turbine generators.

Then you have scandium, which when combined with aluminum becomes an extremely strong yet lightweight alloy used to make everything from Mars orbiters to baseball bats.

Finally, there is yttrium, an element that has numerous rare earth-esque attributes such as creating a red phosphor for televisions and other displays, as well as garnets used in lasers.

This puts the U.S. Department of Defense in the uncomfortable position of depending on a strategic rival for key ingredients of its military hardware.

Undersecretary of Defense for Acquisition and Sustainment Ellen Lord said domestic mines is not the primary hurdle for securing reliable supplies of rare earths for the wide array of military hardware and equipment that rely on the unique properties these enigmatic elements offer.

"The challenge is really the processing of them and having facilities to do that because quite often China mines them elsewhere and brings them back to China to process them," Lord said in August. "So, we are looking at a variety of mechanisms to stand up processing facilities."

Pentagon's interest in helping to establish an American REE supply chain lines up well with Ucore's plan to develop a mine at Bokan Mountain and an associated rare earth separation facility in Ketchikan, a Southeast Alaska port town about 30 miles away.

"The U.S. Department of Defense is now pursuing the ways and means of establishing HREE separation capabilities within the U.S.," said Ucore Rare Metals Chairman Pat Ryan. "Without a doubt, this highly focused opportunity fits hand-in-glove with Ucore's HREE advantages, and our already substantial financing pipeline from the state of Alaska. We look forward to advancing our multi-point solution to the emergent U.S. HREE supply chain."

The Alaska funding mentioned by Ryan is in the form of a loan from the Alaska Industrial Development and Export Authority, which was established by the Alaska Legislature in 1967 to advance economic growth and diversification in the state by providing various means of financing and investment.

In 2014, the Alaska Legislature authorized AIDEA to invest up to US$145 million to help finance the development of a mine at Bokan Mountain and Alaska Strategic Metals Complex, a REE separation facility Ucore envisions building near the coastal town of Ketchikan.

During 2019, AIDEA reviewed Ucore's plans to develop the Alaska SMC and Bokan mine. As a result of this evaluation, Alaska's powerful development finance arm continues to see the projects as a good investment.

One of the reasons for AIDEA's continued interest is the potential that its investments in Alaska SMC and Bokan could be leveraged by federal dollars.

Ucore said the prospective financing from AIDEA is an integral component of its planned objective of developing Alaska SMC, which may get started with rare earth feedstocks from other projects within the U.S. or allied countries; and then potentially from concentrates produced at a future Bokan Mine.

USGS and Alaska Division of Geological & Geophysical Surveys (DGGS) have pinpointed the Ray Mountains near the Dalton Highway just north of the Yukon River as a highly prospective area of Alaska for rare earths and a spectrum of other critical minerals.

This exciting REE hunting ground is within the larger Kokrines-Hodzana highlands, which extends roughly 300 miles southwest from the southern slopes of the Brooks Range to the Tofty area in the Hot Springs Mining District.

One of the interesting characteristics of the Ray Mountains area is this area hosts significant placer REE occurrences. Having the material already broken down to sands and gravels deposited in stream beds could make the first stages of REE recovery easier and less expensive.

That assays of these concentrates returned up to 50% tin; as much as 10% rare earths; and 0.01 to 1% tungsten, tantalum, and niobium. Heavy rare earths – including terbium, dysprosium, erbium, and yttrium – make up 15 to 25% of the total rare earth content in the majority of samples.

As much as 60% of the rare earths recovered from samples collected at No Name Creek are the prized heavy REEs.

The company said most of the initial samples were collected directly from surface exposures, and the heavy mineral content can be expected to increase at greater depths within the alluvium. In some areas the gravels are reported to be as much as 100 meters deep.

Possibly the most intriguing rare earth hunting ground turned up by USGS and DGGS' assessment of Alaska is a 15,000-square-mile region at the west end of the Alaska Range, an area that includes Mount Estelle and the Revelation Mountains.

While this area contains a few small known REE occurrences, these do not account for the high potential a geospatial tool developed by USGS has given to a large portion of this region – a sign that this area is exceedingly underexplored and a great place to hunt for rare earths.

Windy Fork, a placer REE deposit reminiscent of the Ray Mountain placers in Interior Alaska, could provide clues to a potential hardrock source of placer

Bulk sampling of the placers at Windy Fork in the 1990s indicates that this alluvial deposit contains roughly 17 million cubic meters of material containing rare earths and other critical minerals – primarily niobium, titanium, and zirconium.

In total, USGS and DGGS has identified eight large swaths of Alaska that are highly prospective for rare earth elements:

• Northern Alaska Range – which covers a stretch of this iconic mountain range that extends roughly 220 miles west from the community of Tok.

• Yukon-Tanana – a roughly 100-mile-wide swath of Interior Alaska that extends from the Yukon-Alaska border to the Roy Creek REE prospect north of Fairbanks.

• Western Alaska Range – a 15,000-square-mile region at the west end of the Alaska Range, an area that includes Mount Estelle and the Revelation Mountains. 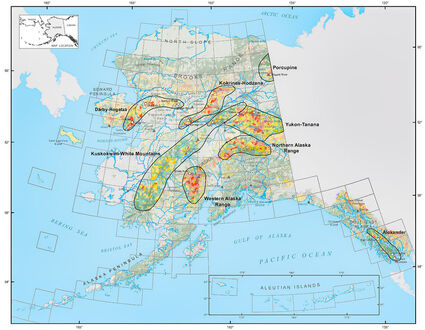 • Darby Hogatza – a roughly 200-mile-long area of western Alaska that includes parts of the Seward Peninsula known for its uranium and REE occurrences; and

Whether it is deposits of rare earths turned up across these highly prospective geological regions of the state or the facilities needed to separate these 17 critical minerals into individual elements, it is becoming increasingly evident that Alaska could play an important role in achieving the White House and Pentagon objectives of establishing an REE supply chain on American soil.