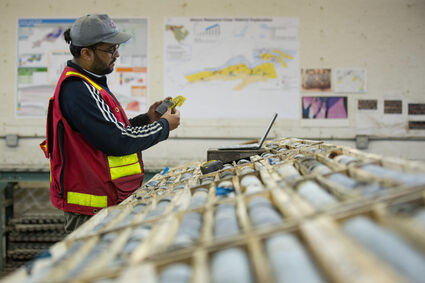 A technician examines core from the 2020 drilling into the high-grade zones on Alexco's Keno Hill Silver mine project.

As the price of silver hovered around US$25 per ounce in 2020, Alexco Resource Corp. took the final lap in its race to production at its Keno Hill Silver Project in central Yukon Territory.

One of the mining industry's few primary silver producers, Alexco set its sights in June on commissioning its renewed Keno Hill mine and mill in the fourth quarter and shipping silver-rich concentrates to market by year's end.

This operation culminates more than a decade of exploration by the company in the historic Keno Hill Silver District, a 240-square-kilometer (93 square miles) area that is one of the highest-grade silver regions in the world. Located about 400 kilometers (248 miles) north of Whitehorse, the district produced more than 214 million oz of silver at an average grade of roughly 1,373 grams per metric ton, or 44 oz/t, from the early 1900s through the late 1980s.

The new mine is expected to produce a yearly average of 4 million oz silver, plus 10 to 12 million pounds each of lead and zinc contained in high-quality lead-silver and zinc concentrates. Total production over an eight-year mine life is expected to hit 1.18 million metric tons of silver-rich ore, processed initially at an average rate of 430 metric tons per day.

"We're a rare breed. There just are not that many primary silver producers," Brad Thrall, Alexco's president told investors recently. "And we have over 100 million ounces of silver in the ground, with only 30% of that in the current mine plan. These are not just ounces of silver; these are high-grade ounces that will be converted onto the income statement by the fourth quarter of 2020."

With all permits and licenses needed to mine ore for the next 17 years, Alexco is focused initially on mining high-grade ore, averaging 805 g/t silver, 2.98% lead, and 1.13% zinc in the eastern end of the district.

"We have four deposits in our prefeasibility study, and the plan is to start at the past-producing Bellekeno Mine and salvage 20,000 to 30,000 (metric tons) out of that mill and use it to commission the mill at Keno Hill," Thrall said.

The other three deposits in the Keno Hill mine plan are Flame & Moth, Bermingham, and Lucky Queen.

Alexco shuttered the 250-metric-ton-per-day Bellekeno Mine in 2013 after 2.5 years of production due to collapsing silver and base metal prices.

A favorite among manufacturers, the precious metal is highly regarded for its unique properties and affordability.

During its short life, Bellekeno produced 5.6 million oz silver and more than 50 million lbs. of lead and zinc concentrate. In recent months, the company has upgraded and improved workings at Bellekeno, anticipating its return to production.

At the new Keno Hill mill, Alexco hopes to increase production to 550 t/d by year four of its eight-year mine plan with improvements in concentrate production.

In preparing for startup at Keno Hill, Alexco took steps early in the year to align its resources with its goals. This included divesting its subsidiary, Alexco Environmental Group, to the unit's executive management in a deal valued at C$13.35 million.

As part of the sale, Alexco retained ownership of Elsa Reclamation & Development Co. and will continue environmental cleanup of the historical mines in the district under existing contracts with the Canadian government. The company also inked a master services agreement that requires AEG to continue providing professional and technical expertise and support to Alexco and ERDC for work in the district.

In March, Alexco implemented restrictions in response to the COVID-19 pandemic that remained in effect throughout 2020. The company also raised nearly C$40 million in two stock offerings in March and June 2020.

Following the company's affirmative production decision in June, Alexco accelerated construction of the mine, mill, and camp facilities. With a year-end startup target in mind, it also hired more workers, including underground miners and mill specialists. In September, Alexco counted 110 employees and 29 contractors, citing a goal of hiring 170 employees by year's end.

The miner also undertook an ambitious exploration program in 2020, hoping to build on past successes.

The program primarily focused on the Bermingham Deep target area, where exploration drilling in 2019 successfully confirmed the presence of wide, high-grade mineralization at depth, below the Bermingham resource. The 2020 drilling program at Bermingham Deep used the previously proven targeting criteria and testing on a gently east-plunging stratigraphic-structural intersection that the exploration team thought strongly influenced the distribution of mineralization. Later, the explorer also expanded its drilling plan by 4,000 meters.

Initial deep drilling was to test for any significant expansion of the Bermingham resource. Success here could provide the basis for a future large-scale infill program.

The focus in 2020 was to define and extend the mineralized zone, which was untested over a total strike length of 800 meters and is open at depth. In addition to core drilling at the Bermingham deposit and the Inca prospect, the 2020 program also included generative exploration initially using a low-impact rotary air blast drill to test numerous shallow drill targets in the district identified from aerial geophysics surveys.

"On the exploration front, in 2020 we are drilling much deeper holes (averaging 650 meters) at our Bermingham 'deep' target exploration program so progress is relatively slow," observed Alexco CEO Clynt Nauman.

The explorer also planned more airborne geophysics over other areas of the district, a move reflecting the effectiveness of this tool in targeting mineralized structures, especially for generative work in areas of cover. 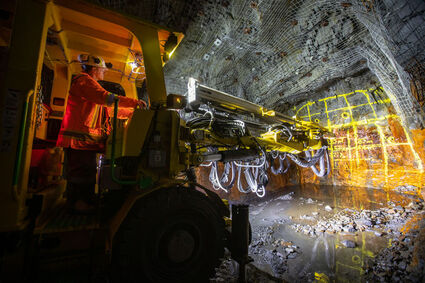 Bellekeno is one of four mines slated to deliver high-grade silver ore to the 450-metric-ton-per-day mill at Keno Hill.

By September, Alexco had completed 3,500 meters in six holes of the surface drilling program at the Bermingham "deep" target. A second drill was added, and the program extended, anticipating a total of 7,500-8,000 meters of drilling to be completed in at least 12 holes by mid-November. The primary target is about 200 meters vertically below the NE Zone of the Bermingham deposit, which contains a total indicated mineral resource of 32.9 million oz silver at an average grade of 930 g/t silver.

The target zone for the remainder of the 2020 drilling is a structural panel that extends 600 to 700 meters along strike where the geologic framework appears to be similar to that identified in the shallower existing resource.

Nauman said, "The decision to extend the drilling program is based on recognition of a prospective zone, which we believe may have a structural framework similar to that which hosts the Bermingham reserve and resource identified at shallower levels."