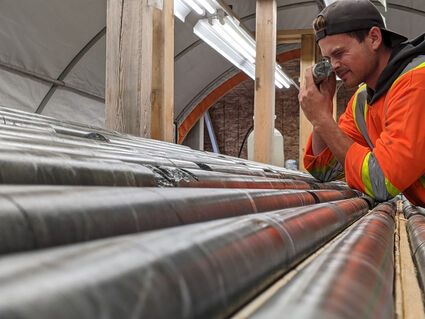 Gold Terra began exploring its initial 37 square-kilometer (14.3 square miles) package of claims and leases about six years ago, and has since increased the property's size more than 21-fold, identifying numerous gold targets and showings along the way.

The Yellowknife mining camp dates to the 1930s and produced gold for more than 60 years until early 2000, when cratering gold prices (US$250/ounce in 1999) forced the mines shut down.

Through a series of acquisitions, Gold Terra gained control of a 790-square-kilometer (305 square miles) contiguous swath of land that wraps around the capital city of Northwest Territories to the north, east and south.

The YCG project encompasses nearly 70 kilometers of strike length of the main mineralized shear system that hosts the high-grade Con and Giant gold mines on the prolific Yellowknife greenstone belt. Together, the historic mines yielded 14 million ounces of gold.

Formerly known as TerraX Minerals Inc., the junior reported its first mineral resource estimate of 735,000 oz gold in the inferred category for the YCG project in November 2019.

After changing its name to Gold Terra in early 2020, the company continued what management called a "rebirth" by reorganizing its leadership. Company founder and geologist Joseph Campbell became chief operating officer, while David Suda took on the role of president, CEO and director, and Gerald Panneton, who joined the company last fall, became executive chairman.

Panneton is best known for developing the Detour Gold Mine, which was sold to Kirkland Lake Gold Ltd. for about C$5 billion.

In May, Gold Terra reported completion of a 34-hole (9,622 meters) winter drilling program at the Sam Otto deposit that extended its strike length to 4,500 meters.

Highlights of the drilling included two 50-meter-plus intersections that averaged more than 1 gram per metric ton gold with shorter intervals of higher grades. Sam Otto Main remains open along strike to the north.

"The second half of 2020 will be the most exciting time for Gold Terra as the Campbell Shear system emerges as the primary focus for the next drilling campaign for a potential new discovery for Gold Terra," Suda predicted in June.

"The first four deep holes at Crestaurum successfully intersected the structure and were gold-bearing," said Suda in an Oct. 27 statement. "More importantly, the drilling has now shown there is potential to find more high-grade zones within the Crestaurum system, and we are excited by what is still to come from the bulk of this drilling program before we turn our sights to the Campbell Shear target."

Gold Terra said all four holes intersected the Crestaurum shear with mixed results. The best intersection was 6.81 g/t gold over 1.4 meters in hole GTCR20-092. These four widely spaced holes (about 150 meters) tested a strike length of roughly 600 meters at a vertical depth of 400 meters, or about 200 meters below the current resource limit. The alteration and mineralization observed in the intersected zones indicated the strong possibility of proximity to higher grade gold mineralization, which could be tested by closer spaced drilling.

The remaining six holes (GTCR20-093 to 098) in phase 1 also intersected the Crestaurum shear and assays are pending.

"This re-interpretation has now expanded the potential size of the Crestaurum deposit by adding over three kilometers of untested strike length to the structure and unlimited dip extent," Suda explained. "In addition, all the remaining holes (assays pending) have intersected more than one shear structure, potentially indicating the presence of multiple mineralized secondary shears and splays converging towards the main Crestaurum shear."

Based on this encouraging assessment, Gold Terra started a second phase of drilling 1,665 meters in 15 shallow holes to test the extended Crestaurum shear structure to the southwest and possible high-grade secondary shears and splays, as well as to expand high-grade zones in the main Crestaurum shear to the northeast.

Gold Terra, meanwhile, extended the project's reach by entering a new exploration agreement in September with Newmont Ventures Ltd. and Miramar Northern Mining Ltd. on a package of mineral leases and mineral claims adjacent to the former Con Mine.

The historic Con Mine was built on a world-class gold deposit where 85% of its production came from the Campbell Shear, which was discovered in 1946.

The Campbell Shear is the lode for the Con and Giant mines, responsible for almost all the 14 million oz of gold that have been produced there. Crestaurum and Sam Otto are considered satellite deposits.

The agreement also contains two phases of potential earn-in. In phase 1, Gold Terra can earn a 30% interest in the property by spending a minimum of C$3 million on exploration over a period of three years on the Newmont exploration property. Gold Terra will also manage, fund and operate the program and upon completing the phase 1 earn-in, the parties agreed to form a joint venture.

In phase 2, Gold Terra can earn another 30% interest, for 60% cumulative ownership in the joint venture, by sole funding all expenditures and completing a prefeasibility study outlining a mineral resource containing at least 750,000 oz of gold on the Newmont Exploration Property, itself, and a combined 1.5 million oz of gold on both the Newmont Exploration Property and the mineral claims in the immediate area which are already owned by Gold Terra.

The junior also will manage and operate the phase 2 program and have up to four additional years to complete the phase 2 earn-in.

Provided Gold Terra completes the phase 2 earn-in, Newmont gets a one time, back-in right to earn back a 20% interest in the joint venture, which would give the major a 60% interest, with Gold Terra holding the remaining 40% stake. The back-in right is triggered if at least five million oz of gold in all mineral resource categories is discovered on the Newmont Exploration Property.

Newmont can exercise the back-in right by making certain cash reimbursements and payments to Gold Terra.

"The achievement of this agreement reflects the shared vision of two companies with the same goal, 'find more gold'," said Panneton in announcing the deal. "Our agreement allows Gold Terra to better explore the southern extension of the prolific Con mine, where approximately 5.1 million oz of gold was produced from the Campbell Shear between 1946 and 2005 at a grade of 15 g/t, and over widths of up to 100 meters. With this transaction, Gold Terra secures the immediate southern extension of the Campbell Shear mineralization, which is immediately north of our 100% owned South Belt property."