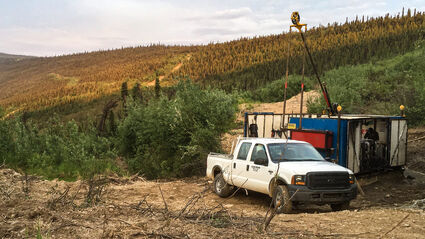 This program included four phases of drilling at the Lone Star and Stander (formerly known as Nugget) zones that lie between the Eldorado and Bonanza Creeks of Klondike Gold Rush fame.

The initial phase of drilling included 13 infill holes at Lone Star, a 5,000-meter-long zone of gold mineralization that runs alongside a major fault above the famed Bonanza Creek.

Focused on an area where Lone Star outcrops, these holes tested for consistency of gold grades and the boundaries of mineralization in an area being considered for a starter pit for mining.

The second phase of 2020 drilling included five infill drill holes to test the main area of outcropping gold mineralization identified along the Stander zone. Situated about 1,300 meters to the southwest and running roughly parallel to Lone Star, Stander is the site of some of the highest grade gold intercepts on the Klondike property.

This, however, is deeper than the potential starter pit mineralization being targeted with the five holes being drilled during the second phase of Klondike Gold's 2020 program. 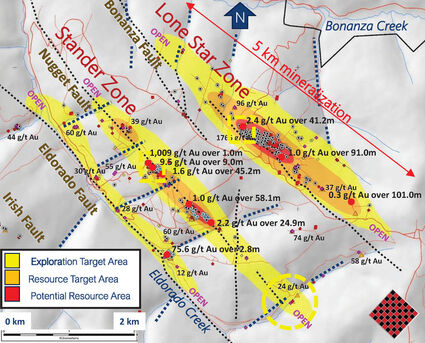 Klondike Gold aims to identify a starter pit at the Lone Star and Stander zones on its namesake property between the famed Eldorado and Bonanza Creeks.

In September, Klondike launched a 27-hole fourth phase of drilling targeting the expansion of Lone Star.