In response to COVID-19, activities at Agnico Eagle's Meliadine gold mine near Rankin Inlet, were scaled back from the end of March to early June. Despite the pandemic-related disruptions, this operation produced 224,125 ounces of gold through the first nine months of 2020.

Agnico Eagle Mines Ltd. viewed the start of gold production from its Amaruq and Meliadine mines in Nunavut during 2019 as an inflection point that marked a new era for the company's endeavors in this geologically blessed, politically attractive, and stable northern Canadian Territory jurisdiction.

The Toronto-based gold miner, however, did not envision this new era starting with a global pandemic that would suspend operations at its new mines and change the modus operandi at its new Nunavut operations.

Following the mid-March declaration of COVID-19 as a pandemic, Agnico immediately began reducing the scope of its operations and sent all its Nunavut-based workforce at its operations in the Canadian territory home, with pay.

Beyond the drilling completed at its mine sites, Agnico completed roughly US$4.8 million in regional exploration on its Nunavut properties during 2020, including about 19,550 meters of drilling.

Following the COVID-19 exploration hiatus, Agnico restarted 2020 drilling on regional targets in late June on the Meadowbank property, site of the company's first mine in Nunavut.

Wide mineralized intervals were intercepted in the four holes drilled at the Crown and Grizzly targets on the Meadowbank property.

Though the reserves at Meadowbank are exhausted, the 11,000-metric-ton-per-day mill there continues to process ore from Amaruq, a satellite deposit about 50 kilometers (31 miles) to the northwest.

During 2020, Agnico carried out conversion drilling over a 330-meter-long portion of IVR West, in order to bring this area immediately north of the Whale Tail pit and west of the planned IVR pit into the Amaruq mine's mineral resources.

An airborne electromagnetic and magnetic geophysical survey was also completed at Amaruq during the second quarter over three grids to generate further exploration targets for field crews to examine at surface and for possible follow-up drilling.

Agnico also remains on-track to expand its gold reserves at Meliadine, an underground gold mine in Nunavut's Rankin Inlet area that produced 191,113 oz of gold in 2019, its first year of production.

An 11,500-meter conversion drill program was also carried out at Discovery, a satellite deposit 17 kilometers (11 miles) east of Tiriganiaq that was last drilled in 2014.

The primary objective of the 2020 exploration program at Discovery is to generate sufficient information to upgrade portions of the deposit's mineral resources into mineral reserves by year-end.

To kick off 2021, Agnico announced that it had reached an agreement to acquire TMAC Resources Inc. for roughly C$288.6 million. Closing of this deal, expected by Feb. 8, will give Agnico ownership of the Hope Bay gold mine in Nunavut. Agnico Eagle Mines CEO Sean Boyd said the company plans exploration and expansion initiatives to realize the full potential of Hope Bay. 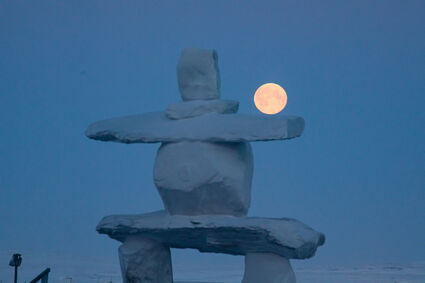 An inuksuk at Agnico's Meadowbank complex in Nunavut.

Agnico is funding exploration at Gold79 Mines Ltd.'s (formerly Aura Silver Resources Inc.) Greyhound property located 32 kilometers (20 miles) south of Meadowbank. Agnico earned an initial 51% interest in a portion of Greyhound in 2017, a stake that can be increased to 70% with additional spending. No field work was completed at Greyhound during 2020 due to COVID-19.

In the Yukon, Agnico Eagle owns a 17.1% stake in White Gold Corp., an exploration company with roughly 1 million acres of gold prospective lands in Yukon's White Gold District, and Jennings, a porphyry molybdenum-tungsten project in the southern part of the territory.