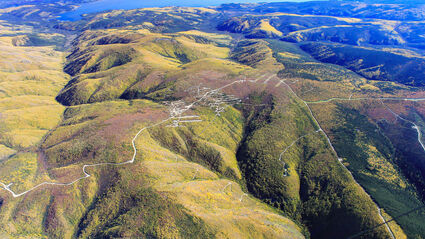 An aerial view of the Peak and North Peak deposits slated to deliver ore containing more than 1 million ounces of gold to the Kinross Alaska mill over a 4.5-year span beginning in 2024.

While Contango ORE Inc. opted not to carry out a 2020 field program in the midst of the COVID-19 pandemic, this unconventional mineral exploration company oft referred to as CORE churned out some of the most exciting results of the 2020 season.

CORE entered 2020 with the appointment of Rick Van Nieuwenhuyse, one of the most prominent names in Alaska's mining sector, as president and CEO. The Alaska-based company exited the year as 30% owner of Alaska's next million-ounce gold producing mine.

This coming mine is to be developed at Peak Gold, a high-grade project lying alongside the Alaska Highway about 220 miles southeast of Fairbanks.

Under a three-way deal coordinated by Van Nieuwenhuyse, Kinross Gold Corp. agreed to acquire all Royal Gold's 40% interest and half of CORE's 60% interest in the Peak Gold JV for US$93.7 million.

CORE received US$32.4 million in cash and the 809,744 of its own shares that were previously held by Royal Gold, valued at US$12.1 million at the time of the transaction, for the 30% Peak Gold JV interest it sold to Kinross.

As a result, CORE emerged from the three-way deal with a 30% interest in a mine slated to begin producing an average of 222,000 oz of gold per year starting in 2024; roughly US$36 million in cash in the bank; and a paltry 6 million shares issued.

Upon acquiring 70% interest in Peak Gold, Kinross unveiled a strategy to begin delivering high-grade Peak Gold ore to the underutilized mill at its Fort Knox Mine in about four years.

In order to meet this timeline, Kinross and CORE launched a geotechnical and metallurgical drill program at Peak Gold in November.

Kinross expects to complete permitting and a feasibility study by the end of 2022.

Based on the currently outlined resource, Kinross expects the Peak Gold deposits to churn out 1 million gold-equivalent oz, which includes the value of both the gold and silver recovered, over an initial 4.5-year mine life.

Kinross estimates that the all-in sustaining cost of mining, trucking, and processing ore mined from Peak will be US$750 per gold-equivalent-oz recovered. At an average price of US$1,750/oz, CORE would average around US$66.7 million of annual free-cash-flow over an initial 4.5 years starting in 2024.

"I have 6 million shares outstanding and I have US$35 million in the bank, I do not need to raise more money to get from here to a producing gold mine," said Van Nieuwenhuyse. "So, this is a great cash flowing opportunity."

This puts CORE in a great position to grow the business through acquisitions and exploration.

And Van Nieuwenhuyse plans to do just that.

"I see this as a launching platform for an Alaska-based exploration and development staged company," Van Nieuwenhuyse told Mining News.

The company already owns 100% interest in 170,000 acres of underexplored state mining claims to the west and north of the 675,000-acre Peak Gold JV project.

"I am really excited about what we have got out on our 100% owned lands," he said.

Hona, a copper-gold prospect about 15 miles northwest of the Peak Gold deposits, is the most advanced target on these claims.

Two holes drilled at Hona in 2019 encountered mineralization, with the most encouraging intercept being 17 meters of 0.41 g/t gold, 5.4 g/t silver and 0.33% copper in the second.

While Van Nieuwenhuyse is intrigued by Hona, he is more excited about Eagle, a robust but earlier staged gold target about 15 miles to the northwest.

"Eagle is really interesting – a dozen creeks in a row are highly anomalous in gold and other metals on both sides of the ridge," he said. 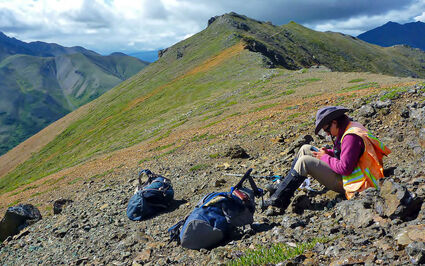 Alicja Wypych, a geologist with the Alaska Division of Geological & Geophysical Surveys, takes notes while investigating the Noah prospect area on the 170,000 acres of state lands being explored by Contango ORE.

Other than stream sampling, there has been almost no geological work to identify the source of the gold, copper and silver found. Something Van Nieuwenhuyse plans to rectify.

Triple Z is a more advanced porphyry copper-gold target on a separate block of claims north of the Peak Gold JV.

Van Nieuwenhuyse is looking to grow CORE's portfolio through the acquisition of mineral exploration properties in Alaska and beyond.

"There are some really interesting opportunities up here, but I do not want to limit myself to just Alaska," Van Nieuwenhuyse said. "I want to look at new opportunities here in Alaska, next door in the Yukon, and British Columbia – I have worked in all those areas."

Looking further ahead, he sees CORE expanding its reach into other top tier mining jurisdictions around the globe. For now, there are plenty of CORE opportunities in his backyard.