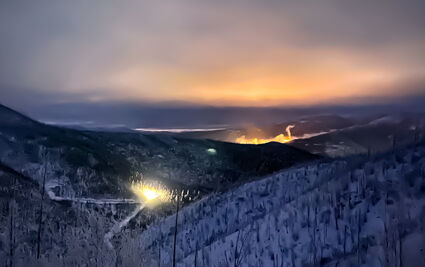 As Resolution Minerals and Millrock Resources drill the Aurora gold target at 64North in November (light at bottom of photo), Northern Star Resources has a drill turning on the Goodpaster gold discovery (green glow) between Aurora and the Pogo gold mine lighting up the sky in the background.

While still known as Northern Cobalt Ltd., this Australia-based junior cut a deal with Millrock Resources Inc. to earn up to a 60% interest in 64North, a 160,000-acre land package encircling the Pogo Mine property, by investing US$20 million in exploration spending over four years.

Upon earning a 60% interest on the entire 64North project, Resolution will have the option to increase its interest on one of the 64North blocks by funding a feasibility study for the selected block and funding Millrock's portion of mine development, in the form of a loan.

Before the ink had dried on the deal, the partners were preparing for a winter drill program at West Pogo.

While most Interior Alaska projects shut down drilling during the cold months of winter, West Pogo has the advantage of being transected by the state-owned industrial road to the Pogo Mine.

By the end of 2019, the partners had pushed a four-mile road into the primary target area at West Pogo and drilled a well to provide water for a US$5 million 2020 exploration program.

As the name implies, West Pogo lies on the western border of the Pogo Mine property. Northern Star has traced Goodpaster, a recently discovered high-grade gold deposit, to the border of West Pogo.

The stacked zones of high-grade gold mineralization in the Goodpaster zone appear to continue into the Aurora target, a 2,000- by 5,000-meter zone of low-magnetic rocks adjacent to a late diorite intrusion on West Pogo.

Resolution and Millrock began testing Aurora in March but before the second hole could be completed the program was suspended to allow crewmembers to fly home ahead of COVID-19 travel mandates.

Both holes encountered anomalous gold along with bismuth, arsenic and tellurium indicative of Pogo-style mineralization but not the high-grade gold the 64North partners were seeking.

Drills resumed turning in June, and by September the partners had completed seven holes in three targets at West Pogo – Aurora, Echo, and Reflection.

The most recent hole, 20AU07, was drilled to a depth of 712 meters to test a northeast trending structural zone proximal to an outcropping diorite intrusive and coincident with conductive rocks identified by geophysics in the Central zone at Aurora. 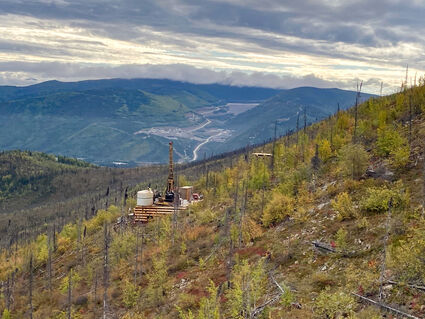 With Northern Star's' Pogo gold mine in the background, Resolution Minerals test the Reflection target at 64North.

At a drill depth of 488 meters, this hole cut a seven-meter quartz vein within a 22-meter-thick zone of intense sulfides, alteration, and quartz veining. The assays from this altered zone returned weakly anomalous gold values.

"The geology team is encouraged by the presence of the seven-meter-thick quartz vein at hole No. 7 and it is important to drill more holes into this immediate area to test for grade variation, lateral extents of the vein, and possible stacked vein sets nearby," said Resolution Minerals Managing Director Duncan Chessell.

This follow-up drilling at Aurora resumed in November with two additional holes. Assays from this roughly 1,100-meter drill program were pending at the time of this report.