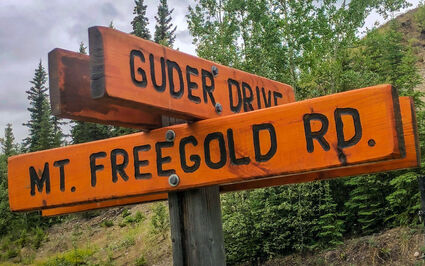 Freegold Mountain is located on Freegold Road, which is being upgraded and extended to Western Copper and Gold's Casino project about 80 kilometers (50 miles) to the northwest.

The primary goal of Triumph Gold Corp.'s 2020 exploration program was to advance underexplored, near-surface gold targets of the Freegold Mountain project in the Yukon.

Over the years, Triumph has identified numerous near-surface porphyry gold-copper targets and deposits over a six-kilometer (3.7 miles) stretch of Freegold Mountain. The two most advanced deposits along this trend are Nucleus and Revenue.

A nine-hole drill program that got underway in August tested epithermal gold targets southeast of the Nucleus and Revenue deposits, as well as shallow gold targets related to the gold-rich porphyry copper mineralization surrounding the Revenue resource area.

In addition to a late start due to COVID-19, this program was challenged by a particularly wet summer in the Yukon.

"The Triumph Gold exploration team conducted a productive and successful field program in 2020 despite the unprecedented challenges faced," said Triumph Gold Chairman and CEO John Anderson. "The program focused on greenfield, near-surface gold targets which coupled with a strong gold market should unlock additional value for our shareholders."

This included drilling at Irene-Goldstar, 3,700-meter-long epithermal gold-silver corridor extending from the historical Goldstar vein and skarn system near the summit of Mount Freegold and continues through the Vindicator zone to the Irene zone at the bottom of the mountain.

Discovered more than 50 years ago, it is estimated that Gold Star hosts 123,000 metric tons of historical resource averaging 4.21 g/t gold and 47.2 g/t silver.

Freegold said one hole drilled this year cut the Goldstar vein 50 meters below any previous intercepts.

The Vindicator zone, which lies along strike to the northwest of Gold Star, has seen sporadic exploration since the 1960s.

A road built along the length of the Irene-Goldstar corridor in 2019 provided access for a fence of holes that cut multiple mineralized zones.

The 2020 program also included trenching and drilling at Melissa, a large multi-element soil anomaly similar to Nucleus; Keirsten, a zone of extremely high chargeability and magnetics between Nucleus and Revenue; and Revenue East, an area of anomalous gold-copper-bismuth-arsenic soil geochemistry which extends more than 700 meters east from the Blue Sky and WAu Breccias of the Revenue resource.