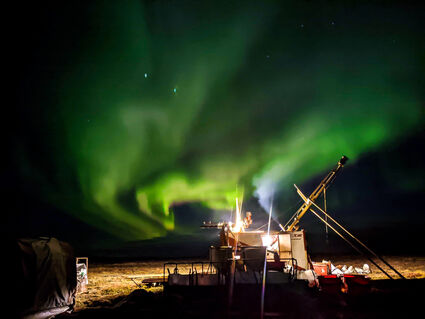 The aurora borealis lights up the sky as crews test the zones of high-grade gold mineralization beneath the Umwelt deposit on Sabina's Goose gold mine project in Nunavut.

When Sabina Gold & Silver Corp. acquired the Back River gold project in Canada's far north in 2009, the junior set out to tame a baby elephant. More than a decade later, the project has tripled in size and is still growing.

Located in remote southwestern Nunavut in the Kitikmeot Region, the Back River Property is located some 520 kilometers northeast of Yellowknife, NT, and 95 kilometers (58 miles) southeast of Bathurst Inlet. The project is named for the nearby Back River, one of Canada's longest rivers which got its modern name from English explorer George Back who visited the Arctic waterway in 1834.

Since it was first explored for gold in 1982, a half-dozen owners, including Homestake Mineral Development Company, Kit Resources Ltd., Kinross Gold Corp., and Miramar Mining Corp., have hunted for the precious metal at Back River. Dundee Precious Metals Inc. took up the hunt in 2005, before selling the property to Sabina four years later. Dundee currently holds a 10% stake in Sabina, and several other parties, including the Canadian government, hold various royalties on any future gold production.

Since 2009, Sabina has aggressively explored the 80-kilometer-long (50 miles) belt of gold deposits in banded iron formation identified on the property. The junior is focused on high-grade gold in two main areas about 60 kilometers (37 miles) apart – the Goose site in the south and the George site in the north.

A 2007 mineral resource estimate for Back River pegged the project's indicated resource at 3.4 million metric tons gold, averaging 10.9 g/t (1.19 million oz) gold and an additional inferred resource of 3.6 million metric tons, grading 10.2 g/t (1.16 million oz) gold. As a result, Sabina envisioned constructing a 200,000-oz-per-year mining operation on the property when it acquired the project in 2009.

Since 2015, Sabina has reported at least three new high-grade gold discoveries at Back River that are not included in the current resource estimate.

In a favorable feasibility study, completed in 2015, the explorer focused on plans to advance the Goose site, and did not incorporate mineral resources at the George site. The Goose site consists of four main deposits that contain predominantly structurally controlled gold mineralization: Goose Main, Echo, Umwelt, and Llama. The George site, located some 60 kilometers (37 miles) to the northwest of Goose, encompasses the Locale 1, LCP North, and Locale 2 mineral deposits.

At a US$1,150 gold price (2015 feasibility study), the project delivers a 24.2% internal rate of return; and at average grades of 6 g/t gold, the property hosts the highest grade undeveloped open pits in the world, according to Sabina.

Despite logistical and financial constraints imposed on the project by the COVID-19 pandemic, Sabina completed a substantial exploration drilling program in 2020, along with pre-development work at Back River.

"We have made considerable advances in our work at the Goose Property this year," Sabina President and CEO Bruce McLeod said in October. "Despite COVID-19 restrictions we have accomplished what we set out to do this year, while maintaining the safety and well-being of our employees and contractors at camp. The extension of the airstrip at Goose is particularly important as it enables us to transport bulk fuel and equipment more cost efficiently and with more flexibility."

In addition to completing an exploration program, Sabina also prepared for construction of an underground exploration ramp at the Umwelt deposit designed to give the company access for continued exploration of a high-grade corridor.

"Based on the exploration success to date on this high-grade zone, we believe that further exploration could demonstrate significant positive impact on project economics and production profile if it were to be mined first," McLeod added.

In July, the explorer mounted a 6,500-meter drilling program that focused on expanding and defining the high-grade corridor at the Umwelt underground, with a focus on the up-plunge portion of the deposit that extends from the current limits of the Vault zone towards the lower limits of the Umwelt open pit.

The drilling focused on a zone directly under the proposed Umwelt open pit (V2 Zone) at depths ranging from 135 meters to 285 meters below surface, over a plunge extent of about 300 meters. All seven drill holes targeting this zone returned exceptional widths of gold mineralization, up to two to three times the average grade of the Umwelt underground reserve.

Sabina said the purpose of the 2020 drilling program was to test whether the higher than average grades encountered in the Vault Zone extend up plunge to the bottom of the planned open pit at Umwelt. This could present an opportunity to revisit mine sequencing with a view to mining higher grade underground material earlier in the mine life, which could have a dynamic impact on project economics, production profile and payback period.

The explorer also said mineralization in the V2 zone is similar to ore in the Vault zone, and this further supports the concept of more high-grade underground corridors within the Umwelt deposit.

"During the past three years we have demonstrated and considerably advanced the potential for higher grade zones within the current Umwelt underground reserve," McLeod said.

Sabina plans to incorporate results of the 2020 exploration into an updated feasibility study due in the first quarter of 2021.

A secondary focus of the 2020 drill program included completing a series of infill and extension drill holes at the Llama Extension zone and adding several high-priority exploration drill targets in advanced discovery areas.

Sabina also completed a 2,064-line-kilometer VTEM (versatile time domain electromagnetic) survey over key areas of the project to aid further exploration of the property. Preliminary survey results are being reviewed for immediate follow-up, while data processing and integration continues. 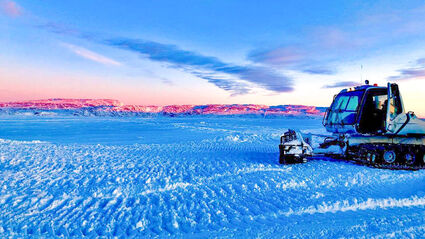 A snow cat clears an ice road that provides the means of delivering large equipment, fuel and supplies from a newly constructed port at Goose Mine project on Sabina's Back River gold property in Nunavut.

Sabina said the work done on Back River over the past two years offers an opportunity to bring higher-grade ounces in earlier in the mine life, providing for an increased production profile, economics and reduced payback, thereby improving an already top-tier project. The recent work will form the basis of an updated feasibility study and mineral resource estimate due in the first quarter of 2021.

The explorer now envisions mining up to 300,000 oz of gold yearly at the proposed Goose mine, along with possible future development.

The project's anticipated 10-year mine life is unchanged, but Sabina said the addition of new deposits may extend that timeframe. The company also noted that it may exclude the George Site from the project's final environmental impact statement.

With all authorizations needed for construction and operation of a mine, Sabina's management said it is nearing a production decision.

Due to seasonality of logistics in the Arctic, construction of the proposed mine will take about 36 months to first gold pour, once the project gets a green light.