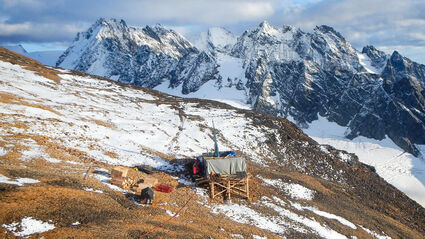 Seabridge drilled 11 holes testing for a large porphyry gold-copper system during the 2020 program at its Iskut property in Northern British Columbia's Golden Triangle.

Successfully incorporating the recently expanded, higher grade Iron Cap gold-copper deposit into the mine plan for the already enormous KSM project in British Columbia, Seabridge Gold Inc. shifted its focus to other endeavors, including the acquisition of gold-rich properties in BC and the Yukon.

An updated preliminary economic assessment for KSM envisions a combined open pit and underground block cave mining operation feeding a 170,000-metric-ton-per-day mill that would produce 27.6 million ounces gold and 17 billion pounds copper over a 44-year mine life, or roughly an average of 627,000 oz of gold and 386.4 million lb of copper per year.

Over the first five years, this operation is expected to produce 1.3 million oz gold and 265 million pounds of copper annually, generating US$1.45 billion in pre-tax free cash flow per year.

At this rate, it would only take four years to pay back the US$5.2 billion of initial capital needed to develop this mine.

And this operation only considers mining about a third of the total resources that have been outlined at KSM.

Seabridge says the PEA does not preclude the operation outlined in a 2016 prefeasibility study. Considering the company added 25.9 million oz of surface mineable gold through the acquisition of the bordering Snowfield property from Pretium Resources Inc., new options arise for KSM.

In a deal that closed in December, Seabridge paid Pretium US$100 million in cash and agreed to pay an additional US$20 million milestone payment for full ownership of Snowfield.

"Work is already underway to determine how to integrate Snowfield into a new KSM mine plan," said Seabridge Chairman and CEO Rudi Fronk. "We expect a large portion of the Snowfield mineral resource could be exploited in a combined operation, which could potentially improve KSM's IRR (internal rate of return) and NPV (net present value) projections as well as shortening the payback period of initial capital."

Seabridge also targeted KSM-like gold-copper mineralization with an 8,961-meter drill program at Iskut, a property about 30 kilometers (19 miles) to the west.

The 11 holes drilled at Iskut last year tapped mineralization consistent with the alteration halo of a large porphyry system. This includes intervals of up to 158 meters averaging 0.16 g/t gold and 0.16% copper, indicating that drilling to date is in the outer portions of the porphyry system Seabridge is pursuing.

"Our team is confident that a potentially productive mineral system has been identified at Iskut," said Fronk. "We think we are into the periphery of a large system which accounts for the size and intensity of the geophysical and chemical anomalies we have identified."

The next step at Iskut is to vector to the heart of that system, which may exist below the depth of the drilling completed so far. Analysis of the intrusive rocks, geochemistry, alteration mineralogy, and structural and deformation settings is being undertaken to refine targets for further drilling this year.

Seabridge also expanded its exploration portfolio with the addition of 3 Aces, a high-grade orogenic gold project in southeastern Yukon. 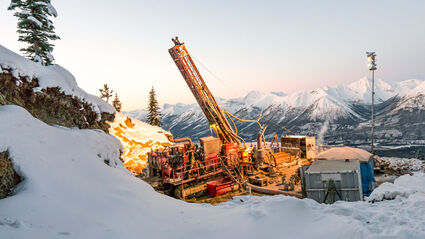 Seabridge said the target concept for this road accessible project is consistent with some of the largest and richest gold deposits in the world, including the California Mother Lode Belt and Juneau Gold Belt in Alaska.

Historical work has identified a broad area of gold-in-soil anomalies extending more than 20 kilometers (12.4 miles) and the Central Core Area has progressed to a point where, with additional drilling, the property could potentially advance to an initial resource with exceptional grade, according to Seabridge.