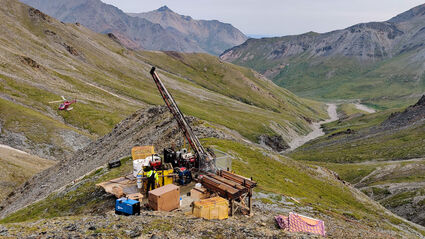 White Rock Minerals Ltd. focused its 2020 exploration in Alaska on a potentially large gold system at Last Chance, a large target toward the western end of the Australian mineral explorer's Red Mountain property in Alaska.

While Red Mountain is best known for its zinc-rich volcanogenic massive sulfide deposits and occurrences, this 308-square-mile (798 square kilometers) property about 60 miles (100 kilometers) south of Fairbanks lies within the Tintina Gold Belt, a particularly gold-rich province that sweeps across Canada's Yukon and Alaska.

A detailed regional stream sediment program completed in 2019 led to the discovery of Last Chance, a gold prospect at the west end of this district-scale land package.

To better understand the gold mineralization at Last Chance and refine targets for a drill program that got underway in August, geologists completed soil sampling across the target.

This sampling identified a roughly 3,550- by 500-meter core within the larger Last Chance target. The most intense zone of gold and arsenic anomalism extends from Sidewinder West, a prospect area at about the center of the Last Chance core, about 2,000 meters southwest to the Pickle prospect.

White Rock reported that some of the quartz veins sampled also contained very strong silver, including 3,150 and 1,625 g/t silver.

While assays are pending at the time of this report, White Rock reports that the most visually encouraging intercept is a roughly 56-meter interval of quartz veining in hole LC20-06, drilled at Sidewinder Blowout. 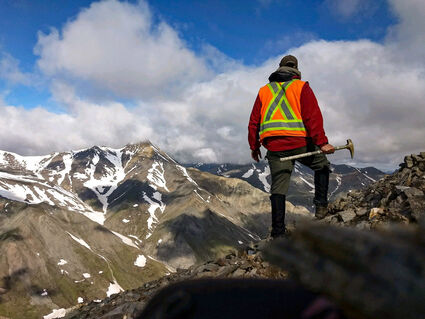 Geologists completed mapping and sampling ahead of the 2020 drill program at Last Chance.

To gain a better three-dimensional understanding of the Last Chance core area, White Rock completed four lines of CSAMT (controlled-source audio-frequency magnetotellurics) over the gold target. The company says the data from this survey, combined with drilling, sampling, mapping and other data collected will provide a quality interpretation of this overall gold system and help refine targets for drilling in 2021.