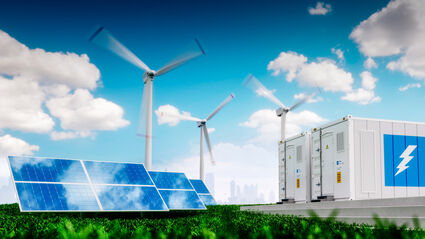 Vanadium flow batteries have the potential for very large capacity, which makes them a contender for storing grid-scale power from wind, solar, and other renewable sources.

A hardener of the steels that have been helping to make Fords tough for more than a century and an element with unique properties that make it the key ingredient in enormous batteries to store intermittent wind- and solar-generated electricity, vanadium is a critical metal with many valences.

It is vanadium's chemical valences that make this alloying metal an ideal ingredient in the redox flow batteries that scientists and governments see as the ideal large-scale storage solution for intermittent renewable energy.

Taking advantage of vanadium's ability to exist in a solution in four different oxidation states and using this property to make a battery that has just one element for both the positive and negative electrolyte solutions, vanadium redox flow batteries have shown the potential to be the superior choice for large-scale energy storage.

"The key to unlocking the full potential of solar and wind energy is to store it for use around the clock," Rep. Diana DeGette, D-Colorado, said during a March announcement the Biden administration is investing up to US$24.5 million to support next-generation batteries. "Flow battery technology can help us utilize the full potential of these clean-energy resources, and investing in this important new technology now is vital to our overall effort to combat the climate crisis."

The amount of energy a VRFB can store is only limited by the size of the storage tanks built to hold the vanadium electrolytes, which are separated by a membrane that allows vanadium electrons to flow back and forth during charging and discharging.

"The emerging need for large-scale electricity storage makes vanadium redox flow batteries a major potential future use of vanadium," USGS wrote. "Because of their large-scale storage capacity, development of VRBs could prompt increases in the use of wind, solar, and other renewable, intermittent power sources."

Above the touted superiorities, using flow batteries for large-scale stationary energy storage would relieve some of the stress off lithium-ion battery supply chains that are already being scaled up at an enormous rate to keep pace with the manufacturing of hundreds of millions of electric vehicles expected to be traveling global highways within two decades.

Much like the minerals and metals needed for lithium-ion batteries, the growth of the renewable energy sector could drive unprecedented new demand for vanadium.

China, Russia, South Africa, and Brazil, however, accounted for roughly 99.8% of global vanadium production during 2020.

While only a trifle amount of vanadium was produced in North America last year, Canada and the United States each host rich deposits of this steel strengthening and emerging battery metal.

Wherever strength is required

While grid-scale energy storage is poised to power future demand, vanadium's more traditional ability to enhance the strength and durability of steel and other alloys continues to be the dominant driver of demand for this critical metal.

The USGS estimates that 94% of the roughly 4,800 metric tons of vanadium consumed in the U.S. during 2020 was used in steel and other alloys.

Vanadium metal was first produced in 1869, and by the dawn of the 20th century, lighter, more durable, and flexible vanadium steels were being used in European racecars.

This inspired Henry Ford to use vanadium steel in the crankshafts, springs, wheel spindles, and other stressed parts in its famed Model T in 1908.

These characteristics were used to tout "Ford superiority" in car building at the time. More than a century later, the "Built Ford Tough" slogan for the legendary automaker's trucks is an echo of the strength vanadium imparted to the Model T.

The chrome-vanadium proudly stamped on tools found in nearly any hardware store is a more direct reference to the toughness vanadium imparts to steels used to make tools and a wide range of other products where strength is of utmost importance.

While other metals could replace ferrovanadium steel alloys, it is typically not worth the costs and energy required to create steel that can compete with those imbued with vanadium's properties.

Steel, however, is not the only alloy enhanced by vanadium. When it comes to strength-to-weight ratio, titanium-vanadium alloys are among the best materials ever engineered. This is invaluable to an aerospace sector seeking to shave pounds of aircraft and space vehicles without sacrificing durability.

"Vanadium, when combined with titanium, produces a stronger and more stable alloy, and when combined with aluminum produces a material suitable for jet engines and high-speed airframes," USGS inked in the vanadium section of a 2018 report on critical minerals. "No acceptable substitutes exist for vanadium in aerospace titanium alloys."

Rise of the flow battery

While strong and stable alloys currently drive the market for vanadium, emerging vanadium redox flow battery technologies have the potential to be a market disruptor for this metal.

"We are looking at the solution, but most of the time we forget the problem," IDTechEx penned in an introduction of its report, "Redox Flow Batteries 2021-2031."

When it comes to the global transition to low-carbon power sources, the problem is the increased use of intermittent renewable energy injects a higher degree of variability and uncertainty into the supply and demand balance of electrical grids.

The solution is a cost-effective and reliable large-scale storage technology that can serve as a buffer between the ebbs and flows of electricity supplied by these renewable sources and completely different undulations in the demands of people and businesses plugging into that power.

Based on scientific studies, IDTechEx believes redox flow batteries will likely be an increasingly important part of that solution.

"Driven by the adoption of an increasing amount of variable renewable energies, stationary storage devices – besides li-ion batteries – are approaching the market, and IDTechEx foresees a large adoption of redox flow batteries toward the end of the next decade," the research firm wrote.

The Biden administration agrees with this potential and is investing up to $20 million for research and development to advance the manufacturability of mid-sized flow battery systems.

Department of Energy, which is administering the program, will partner with industry to address technical and manufacturing challenges that have prevented flow battery systems from achieving cost targets and commercial viability.

To help this maturation of flow batteries and to offer a North American source of the vanadium going into VRFBs, the most mature of the flow battery technologies, VanadiumCorp Resource Inc. has positioned itself along the entire vanadium-based energy storage supply chain.

"To facilitate the required transition from fossil fuels to green energy, VanadiumCorp has developed an integrated supply chain as a key solution," said VanadiumCorp Resource President and CEO Adriaan Bakker. "Our goal of cost-effective green energy is made possible by combining strategic vanadium battery supply and green process technology to enable the indefinite use of vanadium in energy storage."

"We can state Lac Doré is one of the largest undeveloped deposits of vanadiferous magnetite in the world, with an excess of 1.4 billion pounds of vanadium pentoxide contained in magnetite concentrate," said Bakker.

Iron-T, which is roughly 220 miles (350 kilometers) west of Lac Doré, hosts an additional 14.38 million metric tons of inferred resource averaging 0.42% vanadium, or about 0.77% vanadium-equivalent when you calculate the value of the iron and titanium also found there.

Working in partnership with Quebec-based Electrochem Technologies & Materials Inc., VandiumCorp has also developed a new process that uses less heat and more science to recover 95% of the vanadium, iron, and titanium from vanadiferous titanomagnetite deposits such as those at Lac Doré and Iron-T.

This is much cleaner than conventional roasting and smelting, which requires the burning of two tons of carbon to produce one ton of vanadium and leaves the iron and titanium as a waste material that must be disposed of.

In addition to significantly reducing the carbon and environmental footprint, this VanadiumCorp Electrochem Process Technology is expected to lower the cost of producing battery-grade vanadium due to the added revenue from selling the iron and titanium dioxide co-products.

Earlier this year, VanadiumCorp entered into an agreement to test its patented and proprietary green recovery process on titanomagnetite concentrates from Strategic Resource Inc.'s Mustavaara project in Finland.

Mustavaara hosts a historic mine that provided roughly 10% of the world's supply of vanadium over nearly a decade, ending in 1986. Strategic, which is working toward re-establishing vanadium production at this past-producing mine, believes the VanadiumCorp process could be a more environmentally sound means of extracting all the value Mustavaara has to offer.

"Our Mustavaara project could substantially benefit from the addition of a third revenue stream and potentially a lower capital, less carbon-intensive way of extracting vanadium and iron," said Strategic Resources CEO Scott Hicks. "Our team believes in redox flow batteries and would be excited to gear our project towards the growing market."

For VanadiumCorp, the implementation of its process technology offers a potential revenue stream through licensing and helps to advance its larger objective of establishing vanadium batteries as a major component of the green energy solution.

Toward this overarching goal, a Germany-based subsidiary of VanadiumCorp has developed a vanadium flow battery system that stores energy in liquid vanadium electrolyte that never degrades, another advantage VRFBs hold over lead-acid, lithium-ion, and other battery systems that experience cross-contamination due to the different anode and cathode materials.

VanadiumCorp's flow batteries are modular and can be built with capacities as low as 20-kilowatt-hour for residential electrical storage and up to several megawatt-hours for grid-scale applications.

Despite their advantages, vanadium redox batteries are lagging behind their lithium-ion counterparts when it comes to economics of scale.

A recent study funded by the U.S. Department of Defense, however, concluded that vanadium flow batteries may become the more attractive solution for microgrid electrical storage as the technology matures and the price comes down.

By tackling the entire supply chain, VanadiumCorp hopes to accelerate VRFB maturity, while also shrinking the carbon footprint of the entire process, from mines to batteries.

"With a substantial resource base in Canada and technology to unlock global supply, I believe VanadiumCorp may hold the key to our low-carbon future," said Bakker.

On the American side of the border, U.S. Vanadium Holding Company LLC produces small amounts of high-purity vanadium products used in a wide array of products – from dyes and vitamins to alloys and batteries – at its facility in Arkansas.

According to the USGS, roughly 470 metric tons of vanadium was produced in the U.S. in 2019 and about 170 metric tons in 2020. Most of this production likely came from the Arkansas facility, which was acquired by U.S. Vanadium in 2018.

Previously owned by a Russian steel conglomerate, production at the Hot Springs vanadium facility has been in decline since 2008.

Though the COVID pandemic has slowed its plans, U.S. Vanadium is working toward scaling production back up and plans to restore the operation's full 5,450-metric-ton-per-year capacity. 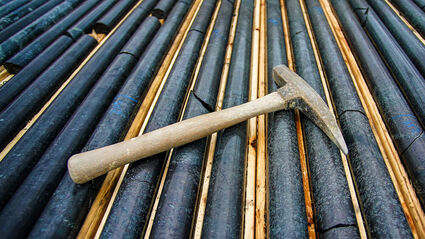 U.S. Department of Commerce opened an investigation in 2020 into whether this import-dependence for the critical alloy and battery metal is a threat to national security.

In a joint letter to the Commerce Department, U.S. Vanadium and AMG Vanadium said tariffs on vanadium imports are needed to strengthen domestic production of this critical mineral.

"Supply lines from South Africa, Russia, Brazil, and China are obviously lengthy and subject to periodic and unpredictable disruption, particularly from government action," said U.S. Vanadium CEO Jody Orme. "Fortunately, the U.S. currently has the capability to meet total demand for high-purity vanadium, and more than half of the demand for steel-grade vanadium, if proper relief is provided and proper economic conditions are created."

The findings of the Department Commerce investigation into vanadium had not been released at the time of this report.