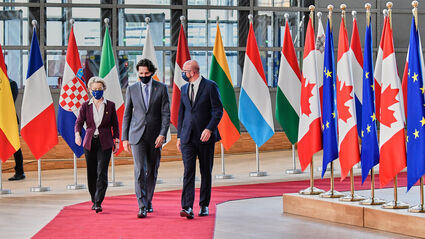 Canada is positioning itself as the "global supplier of choice" for the critical minerals and metals essential to tomorrow's technologies, especially the almost unfathomable quantities of raw materials that will be required by a world transitioning to low-carbon energy and electric vehicles.

"Demand for minerals and metals continues to grow with an increasing focus on critical minerals – vital in aerospace, healthcare, telecommunications and an array of clean technologies such as solar panels and electric car batteries," said Mining Association of Canada President and CEO Pierre Gratton. "We're confident that, with Canada's leadership in sustainable mining standards and the government's commitment to critical minerals development, the mining sector has the tools, skills and support to provide the responsibly sourced minerals vital to industries in Canada and around the world."

In March, government officials unveiled a list of 31 minerals and metals critical to Canada. Unlike similar lists previously assembled by the United States and European Union – which are focused on critical raw materials that are in high demand by technologies important to the national interests of these economic powerhouses but for which reliable supplies may not be readily available – Canada's list is more akin to a catalog of 31 critical minerals and metals it has in stock to meet the global needs.

While Canada's critical minerals catalog hosts many of the usual suspects – cobalt, graphite, lithium, rare earth elements, and a majority of the other minerals and metals considered critical to both the U.S. and EU – it also includes copper, nickel, and zinc – base metals that are fundamental to building the green energy future but are more readily available than traditional critical minerals.

And Canada's federal and provincial governments are standing shoulder-to-shoulder with the mining industry to ensure the Great White North is the global stockhouse of the minerals and metals needed to feed into 21st century supply chains.

"Importantly, industry and government are pulling in the same direction," O'Regan and Gratton penned in a May column published in The Province. "We are building on our strengths, recognizing that the road to a low-emissions future is paved with clean technologies, and that minerals and metals will provide the materials we need."

While the U.S. list of 35 critical minerals and EU list of 30 critical raw materials vary slightly due to the particular needs of these global economic powerhouses, the criteria for determining criticality are nearly identical – raw materials that are crucial to their economies but are at risk for disruptions due primarily to overreliance on limited and sometimes unreliable supplies.

"We import lithium for electric cars, platinum to produce clean hydrogen, silicon metal for solar panels. 98% of the rare earth elements we need come from a single supplier – China. This is not sustainable," European Commission President Ursula von der Leyen said during the opening speech at EU Industry Days 2021 in February. "So, we must diversify our supply chains."

Canada, which has plentiful supplies of all the energy materials named by von der Leyen and 18 others on the EU critical raw materials shopping list, is working closely with European leaders.

"We are moving forward with our allies and like-minded countries, including the European Union," said O'Regan.

This includes forging a new strategic partnership to help provide the EU with a secure and sustainable supply of minerals and metals critical to the global transition.

As part of a broader conversation, the leaders from opposite sides of the Atlantic committed to stronger collaboration on mining and mineral processing research and innovation, as well as creating new trade opportunities and private and public investment for critical mineral related businesses in Canada and the EU.

"We agreed on building a strategic partnership on raw materials," von der Leyen said during a joint conference with Trudeau following their meeting. "We, as Europeans, want to diversify our imports away from producers like China – because we want more sustainability, we want less environmental damage, and we want transparency on labor conditions."

Trudeau agrees that EU- and Canada-centric supply chains would be more sustainable and offer job opportunities.

"In order to continue creating good, green jobs for the middle class, we must secure supply chains for critical minerals and metals that are essential for things like electric car batteries," the Canada prime minister said, following his meeting with von der Leyen.

To expedite trade cooperation between these cross-Atlantic economies, the leaders also reaffirmed the strong ties under the Canada-European Union Comprehensive Economic and Trade Agreement. And, to build on this relationship, advanced an Authorized Economic Operator Mutual Recognition Agreement to simplify border procedures and speed up the flow of trade between Canada and the EU. This is expected to increase predictability at the border and decrease fees and delays for Canadian businesses shipping goods to the EU.

President von der Leyen says this strengthening of CETA is "good for jobs, it is good for growth on both sides of the Atlantic."

While forging stronger ties with the EU is good for Canada's mining sector, the U.S. is the northern nation's largest trading partner and is expected to be its biggest critical minerals customer moving forward.

"We already supply 13 of the 35 minerals on the U.S. list and we have the potential to supply more," said O'Regan.

While the Trump administration was still in the White House, Canada and the U.S. finalized a joint action plan to collaborate on securing supply chains for the critical minerals needed for EVs, renewable energy, high-tech, aerospace, defense, and other important sectors of the neighboring countries' economies.

Despite a major shift in the political views of the presidential office in Washington D.C. since this critical minerals action plan was initiated, O'Regan says the new occupants of the White House are eager to continue to work with Canada to diversify supplies of mined materials, especially those needed to meet the green energy goals of the Biden administration.

"There is definitely a very clear enthusiasm on securing critical mineral supply chains between our two countries," O'Regan said during the March unveiling of Canada's critical minerals list.

The Biden administration has several reasons to be enthusiastic about Canadian critical minerals – being environmentally sound, socially responsible, and right next door are at the top of this list.

"Canada has one of the cleanest electricity grids on the planet, with 82% of generation coming from non-GHG [greenhouse gas] emitting sources, meaning we produce some of the lowest carbon intensity mineral and metal products anywhere in the world, O'Regan and Gratton penned in their joint column. "Nickel mined in Canada, for example, produces lower emissions than nickel mined in 90% of the world."

They also said the northern nation's mining sector is years ahead of other industries when it comes to partnering with and providing economic opportunities to Canada's First People.

"Simply put, we are a responsible, reliable supplier of many of the world's mined resources, and we have room to grow," the Canadian government and mining sector leaders penned in their joint column.

Many of Canada's provincial governments are also investing in and encouraging the sustainable development of critical mineral projects, often in partnership with Ottawa.

In March, Ontario has unveiled plans to develop a strategy to position the province as a global supplier, producer, and manufacturer of choice for critical minerals such as cobalt, copper, lithium, nickel, rare earths, and platinum group elements.

"Industries across Ontario and around the world need a steady supply of critical minerals to support new technologies and emerging industries, including electric vehicles," said Ontario Minister of Energy, Mines and Northern Development Greg Rickford. "With the development of a critical minerals strategy, the province can showcase Ontario's competitive advantage, high mineral development potential and world-class mining sector."

This strategy is expected to "generate investment, reduce red tape, create jobs, and advance Indigenous participation in the sector," according to Rickford.

Before the unveiling plans for this strategy, the province was already working to bolster its critical minerals sector.

Late in 2020, Ontario provided a C$5 million non-repayable grant to help accelerate the commissioning and expansion of First Cobalt's refinery in the province.

Located less than 500 miles north of Great Lakes manufacturing towns such as Detroit and Buffalo, the rail-accessible First Cobalt refinery will be capable of producing 25,000 metric tons of battery-grade cobalt sulfate per year, which will go a long way toward filling North American requirements.

In conjunction with the provincial grant, Ottawa provided First Cobalt with a C$5 million interest-free loan.

"Global demand for cobalt is increasing as electric vehicles become more widely adopted. Our refinery will be the only source of domestic cobalt for the North American electric vehicle industry and it will also be well positioned to support the European market," said First Cobalt President and CEO Trent Mell.

Further information on cobalt, including First Cobalt projects in Ontario and Idaho can be found at Solving the critical cobalt conundrum.

Not to be outdone, Quebec is also supporting the sustainable production of critical mineral projects in the province.

A feasibility study completed in 2018 details plans for a mine at Matawinie that would produce 100,000 metric tons of graphite concentrate per year.

Flake graphite produced at Nouveau Monde's processing facility in the nearby town of Saint-Michel-des-Saints is to be trucked roughly 100 miles (165 kilometers) to its advanced material plant at Bécancour, where it will be upgraded to the coated spherical graphite that serves as the anode material in most lithium-ion batteries.

As a forward-looking company feeding a vital ingredient into renewable energy EV supply chains, Nouveau Monde intends to shrink the carbon footprint of all its Quebec operations to net-zero.

Being led by Propulsion Québec, a group aimed at positioning Quebec as a leader in developing and implementing smart and electric transportation, this project involves the development of an electric propulsion system for a 40-ton Western Star mining truck to be tested at Matawinie.

"We're helping mining companies lower their emissions by investing in onsite emissions reduction technologies, and they're helping us by powering the clean technologies we'll need to reach net-zero by 2050," said O'Regan.

Taking a major step toward this goal for its own mine and the mining sector at large, Nouveau Monde is collaborating with Caterpillar Inc. to develop, test, and produce a fleet of all-electric Cat mining equipment for Matawinie. 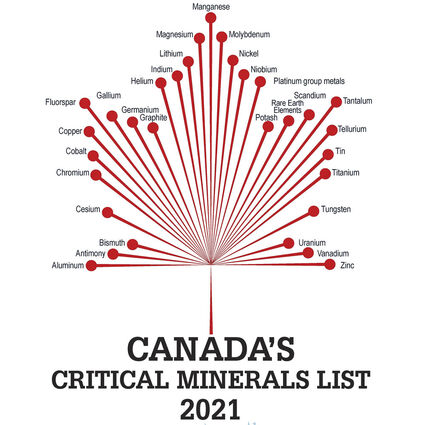 Canada has assembled a list of 31 critical minerals and metals that it has in stock to meet the growing needs of a world transitioning to low-carbon energy and electric vehicles.

"The collaboration between Caterpillar and Nouveau Monde marks an important milestone in the mining industry," said Caterpillar Group President Denise Johnson. "Through integrated technology, machines and services, the entire Caterpillar team is proud to support Nouveau Monde as they work towards constructing and establishing their first zero-emission mine."

A coming mine that is serving as a shining example of what Canada's mining sector has to offer the U.S., EU, and the rest of the world.

"With companies like Nouveau Monde working toward all-electric mines and producing the critical minerals we need for advanced batteries, we are positioning Canada's mining industry as a progressive, sustainable global producer of critical minerals needed for the transition to a clean energy future," said Paul Lefebvre, parliamentary secretary to the Canadian minister of natural resources.

Or, as O'Regan and Gratton put it, "This is mining's moment. Canada will lead."