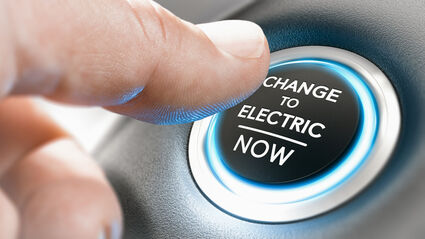 Many global governments and automakers plan to transition to 100% electric or other zero-emission vehicle sales by 2035.

Global governments and industries are setting increasingly ambitious targets for the phasing out of fossil fuel-burning automobiles in favor of electric vehicles charged with green energy. Achieving these grand climate objectives, however, is going to require an equally bold strategy to ensure there are plentiful supplies of the new generation of energy minerals and metals critical to building this revolution in the way the world generates and uses energy.

The World Bank Group estimates that more than 3 billion tons of minerals and metals will be required to achieve the 2-degree Celsius temperature increase limit outlined in the 2015 Paris Agreement.

That is due to every facet of a world transported with emissions-free electric vehicles charged with low-carbon energy being much more mineral-intensive than the legacy technologies they are replacing.

According to "The Role of Critical Minerals in Clean Energy Transitions" report published by the International Energy Agency earlier this year, the annual supplies of minerals and metals being fed into the burgeoning EV and battery storage sectors are expected to expand by 30 times by 2040. In such a scenario where global governments and industries achieve the targets of the Paris Agreement, the low-carbon demand for lithium is expected to rocket 40-fold; and the clean energy demands for graphite, cobalt, and nickel are expected to surge by upwards of 25 times.

The development of mining projects needed to meet this demand, however, is measured in geological time scales when compared to the relative lightspeed adoption of EVs and low-carbon electrical grids envisioned to meet 2050 climate targets.

"Today, the data shows a looming mismatch between the world's strengthened climate ambitions and the availability of critical minerals that are essential to realizing those ambitions," said IEA Executive Director Fatih Birol.

This imbalance could make full attainment of global climate goals out of reach.

EVs to be biggest driver

Given the colossal size of the automotive market and the aggressive industry and government push to transition as many drivers to EVs as soon as possible, electric mobility is expected to be the biggest driver of new demand for critical minerals in the coming two decades.

With the 2050 climate goals of the Paris Agreement serving as a waypoint, a growing number of automotive companies and governments have set 2035 as the target for a complete transition to electric vehicle sales. This date is based on the average 15-year lifespan of passenger vehicles – meaning that most everyday internal combustion engine vehicles would be cycled off global highways by mid-century.

General Motors, among the global automotive powerhouses declaring to sell only zero-emissions vehicles by 2035, recently announced that it is investing $35 billion toward this goal over the next five years.

"We are investing aggressively in a comprehensive and highly integrated plan to make sure that GM leads in all aspects of the transformation to a more sustainable future," said GM Chair and CEO Mary Barra. "GM is targeting annual global EV sales of more than 1 million by 2025, and we are increasing our investment to scale faster because we see momentum building in the United States for electrification, along with customer demand for our product portfolio."

This includes heavy investments into at least four lithium-ion megafactories and securing new sources of the battery metals that are going to be highly demanded as the e-mobility momentum continues to grow.

Find out more about a GM partnership to secure sustainably produced lithium from geothermal waters in California at Titans forge critical lithium alliances in this edition of Critical Minerals Alliances.

With both the global automotive industry and governments behind the transition to e-mobility, EV sales are forecast to hit 30 million per year by 2030 and 82 million by 2040. At this projected growth rate, battery-powered cars and trucks would overtake ICE vehicles in terms of sales volume by 2035.

This is going to drive enormous demand for lithium-ion batteries, a burgeoning sector that has already quadrupled in size over just the last five years and is expected to grow 20 times larger over the next two decades.

With Benchmark tracking more than 200 lithium-ion battery gigafactories being built or planning to be built to meet EV demand, the companies that feed new supplies of minerals and metals into this supply chain must hit a higher gear.

The IEA estimates that approximately 117 pounds of copper and 54 lb of manganese goes into the average EV, which is more than double the 49 lb of copper and 25 lb of manganese that goes into a typical internal combustion engine vehicle. On top of that, standard lithium-ion EV batteries need around 146 lb of graphite, 88 lb of nickel, 29 lb of cobalt, and 20 lb of lithium.

While this will power significant new demands for copper and nickel, the growth rate for this already widely mined metal pales in comparison to the explosive need for new supplies of the lesser mined battery minerals and metals.

For example, the lithium-ion batteries powering EVs alone will soon require five times more graphite than is currently produced at all the mines on Earth. This is on top of the graphite needed for traditional uses like lubricants and steelmaking, and the rising demand for this carbon mineral in batteries storing renewable energy and powering the innumerable mobile electronic devices and tools.

The story is similar for cobalt, lithium, and nickel.

Caspar Rawles, the head of price assessment at Benchmark Mineral Intelligence, told Data Mine North that low minerals and metals prices have stifled investments into the mines that will supply these raw materials needed for lithium-ion batteries.

"We see key battery raw material markets falling into deficit, most imminently cobalt, but (also) lithium, graphite, and nickel over the coming years," he penned in a January email.

The full climate benefits of transitioning to e-mobility will not be fully realized unless the millions of EVs traveling global highways and byways are being charged from zero-carbon electricity sources, which also happen to be much more mineral-intensive than their fossil fuel burning forebearers.

Copper, chromium, manganese, molybdenum, nickel, rare earths, and zinc all go into building wind turbines and connecting them to the grid.

While not quite as mineral-intensive as wind, photovoltaic solar requires more than six times the metals per MW of electricity generated than natural gas and nearly three times as much as coal.

What sets PV solar apart is the many rare elements such as cadmium, gallium, germanium, indium, selenium, and tellurium used to turn sunlight into electricity – all are scarce and seldom mined as a standalone commodity.

Three of these metals often used in PV cells – germanium, indium, and cadmium – are typically associated with zinc in nature and are primarily recovered as a byproduct of mining this galvanizing metal.

Gallium is currently generally recovered as a byproduct of aluminum but is almost as common in zinc deposits and has recently been found alongside rare earths at the Alces Lake project in Canada.

Tellurium and selenium are oft associated with copper.

Currently, however, we only capture a small amount of these solar byproduct metals – the rest gets tossed with the other waste at refineries. With the renewable energy sector requiring more of these materials, mining companies and refinery operators are increasingly investing in the technologies to recover these critical byproduct metals.

One such example is the construction of a new plant to recover tellurium from copper refining at Rio Tinto's Kennecott mine in Utah.

"The minerals and metals we produce are essential to accelerate the transition to renewable energy," said Rio Tinto Kennecott Managing Director Gaby Poirier. "Rio Tinto is committed to using innovation to reduce waste in our production process and extract as much value as possible from the material that we mine and process."

Storing the intermittent electricity generated by wind and solar for delivery to customers when the wind is not blowing or the sun is not shining adds another layer of demand for critical minerals.

Currently, lithium-ion batteries are providing the largest storage buffer between the ebbs and flows of variable renewable electricity and completely different undulations in the demands of people and businesses plugging into those sources of clean power.

While not as well-established as lithium-ion, there are several battery storage technologies being implemented that would diversify mineral demand and happen to be better suited for stabilizing grid power.

One such technology, redox flow batteries, is forecast to overtake lithium-ion in terms of total storage capacity by 2031, and investments by the Biden administration could help make these projections a reality.

In addition to diversifying the demand for metals needed for the clean energy revolution, flow batteries offer several advantages over their lithium-ion counterparts in terms of response time, reliability, and safety for keeping energy grids energized and stable.

The U.S. Department of Energy is investing up to $20 million for research and development to advance the manufacturability of mid-sized flow battery systems.

Vanadium redox is the most advanced flow battery technology and is currently considered the frontrunner for these battery systems.

More information on vanadium and its uses can be read at Battery valences power vanadium demand.

As the debate over whether lithium-ion, vanadium redox, or some other flow battery technology will dominate grid-scale energy storage, an intriguing new system that stores the energy in zinc particles is making inroads into the market.

Zinc-air battery systems, especially the technology developed by Zinc8 Energy Solutions, has attracted considerable attention as a lower-cost energy storage option for utilities and others with large power needs.

These batteries are capable of storing multiple days' worth of energy and are up to five times cheaper than lithium-ion batteries.

Zinc8 says this system empowers the lowest cost of storage in the market for long-duration applications, resolving the intermittent and unpredictable nature of other renewable energy sources.

This groundbreaking energy storage solution won the New York Power Authority (NYPA) Innovation Challenge, which has resulted in a contract for a large installation of this system in New York State.

"This is the thing that's changed our company – going from having some interest, but nobody thinking that zinc-air was ready – to our phones ringing nonstop from big utilities and globally connected companies around the world," said Zinc8 Energy Solutions President and CEO Ron MacDonald. 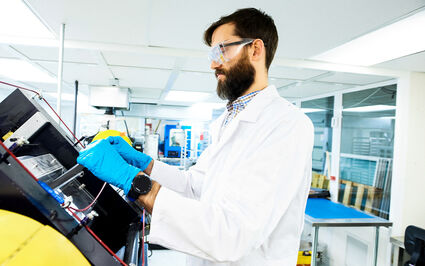 A Zinc8 technician works on a zinc-air energy storage system.

This includes a call from SmartConsult, an Australia-based engineering firm with an extensive network of Aussie contacts and clients across the entire energy supply chain, to install Zinc8's zinc-air energy storage system at aquatic centers, remote mines, microgrids, and other Down Under applications.

"We have been looking for a battery solution that does not have the inherent issues that surround existing battery types with uncertain cycle life and limited longevity," said SmartConsult CEO Luke Hardy. "The Zinc8 solution will be ideal for our large-scale industrial customers."

And, with zinc being one of the most common metals on Earth, it offers an ideal solution for diversifying grid-scale energy storage and the mined materials needed to achieve the increasingly ambitious targets for phasing out ICE automobiles in favor of EVs charged with green energy.