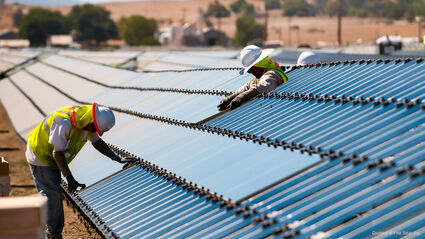 Amongst the rarest of the stable elements on the periodic table and an important ingredient in the emerging thin-film solar panel sector, tellurium embodies what it means to be a critical metalloid – an element that possesses the properties of both a metal and non-metal.

"Most rocks contain an average of about 3 parts per billion tellurium, making it rarer than the rare earth elements and eight times less abundant than gold," the United States Geological Survey wrote in a 2015 report on tellurium. "Grains of native tellurium appear in rocks as a brittle, silvery-white material, but tellurium more commonly occurs in telluride minerals that include varied quantities of gold, silver, or platinum."

Because it is so uncommon and typically recovered as a byproduct of its more abundant neighbors on the periodic table, very little of this element that possesses the properties of both a metal and non-metal is produced. During 2020, only about 490 metric tons of tellurium was recovered as a byproduct of refining copper concentrates, with roughly 60% being produced in China.

It is hard to pinpoint how much tellurium is produced in the U.S. due to the proprietary nature of the recovery of byproduct metals at refineries. One copper refinery in Texas ships tellurium-containing anode slimes to Mexico for further refining.

It is expected that other copper refiners will need to begin recovering tellurium considering the growing demand for the metalloid for photovoltaic solar energy generation.

"The main concern surrounding tellurium supply is the question of whether or not global copper production can meet the growth in tellurium demand," USGS penned in a 2014 tellurium brochure.

Fortunately, the same low-carbon energy push that is increasing the demand for more solar panels and the tellurium that goes into them is also creating massive demand for copper, which should create new sources of tellurium, if refiners are willing to invest in the equipment to recover it.

More information on the copper needed for electric vehicles and renewable energy can be read at Renewable revolution powers copper demand in the current edition of Critical Minerals Alliances.

Traditionally, the small amounts of tellurium produced globally was used as an additive to improve the strength and pliability of steel, copper, and lead alloys. This has changed with the advent of cadmium telluride (CdTe) thin-film solar panels.

While the solar market continues to be dominated by traditional silicon solar panels, CdTe panels are becoming increasingly popular. This is due to these thin-film panels' ability to absorb sunlight close to the optimal wavelength for converting to electricity, and they are relatively inexpensive to make.

Despite their sunlight absorption capacity, CdTe thin-film cells are less efficient than their silicon counterparts. The low production costs, however, often overcome this disadvantage and CdTe have been the panel of choice in some of the largest solar farms in the U.S.

USGS estimates about 40% of the tellurium consumed in the U.S. during 2020 went into CdTe photovoltaic cells, the balance was primarily used to produce bismuth telluride thermoelectric devices for cooling and energy generation; as an alloying additive to improve the machining characteristics of steel; and as a vulcanizing agent and accelerator in the processing of rubber.

"CdTe solar cells are the second most common photovoltaic technology in the world marketplace after crystalline silicon, currently representing 5% of the world market," according to the U.S. Department of Energy. "CdTe thin-film solar cells can be manufactured quickly and inexpensively, providing a lower-cost alternative to conventional silicon-based technologies."

Due to the low cost of CdTe solar cells, coupled with being less affected by dust, shading, and high temperatures, this emerging technology is expected to continue to nab larger shares of the solar market.

Earlier this year, First Solar, a world-leading manufacturer of CdTe solar systems, announced that it is investing $680 million to expand its U.S. photovoltaic solar manufacturing capacity by 3.3 gigawatts.

This new facility will be one of the most advanced of its kind in the solar industry, allowing First Solar to produce an anticipated average of one CdTe module roughly every 2.75 seconds across its three-factory Ohio footprint once full production capacity is reached.

"These investments in American-made solar technologies are the perfect embodiment of President Biden's strategy to build out domestic manufacturing and supply chains for critical industries," said U.S. Secretary of Energy Jennifer Granholm.

Thanks to a $2.9 million investment by global miner Rio Tinto, new supplies of American mined tellurium will be available to First Solar.

Announced earlier this year, Rio Tinto's investment is in a new plant that will recover about 20 metric tons of tellurium per year as a byproduct of smelting copper at its Kennecott Mine in Utah.

"With abundant natural resources, Utah is ideally positioned to help supply the critical minerals essential to maintain American manufacturing competitiveness," said Utah Gov. Spencer Cox. "Rio Tinto's smelter at Kennecott is one of only two that is capable of producing copper and other critical minerals. The new tellurium plant is another valuable contribution to critical mineral independence and energy security in the U.S."

"The minerals and metals we produce are essential to accelerate the transition to renewable energy," said Rio Tinto Kennecott Managing Director Gaby Poirier. "Adding tellurium to our product portfolio provides customers in North America with a secure and reliable source of tellurium produced at the highest environmental and labor standards with renewable energy."

First Solar said tellurium from the Utah mine could supplement its current supplies coming from the U.S., Canada, and Europe.

CdTe cells also happen to be long-lasting – First Solar says its newest series of cells will retain at least 92% of its original performance at the end of their 30-year warranty – so recycling from these panels may not be a significant source of tellurium in the near-term. If solar demand for tellurium does happen to outpace byproduct copper production, however, there is another option – gold mines.

"Recycling solar cells may help, but tellurium-rich films have long lifespans and to date have not been extensively reused. It might become an economic necessity to extract tellurium directly from telluride minerals during gold mining in locations such as Cripple Creek, Colorado; the Sierra Foothills of California; and southeastern Alaska," USGS wrote.

The world-class Archean gold deposits of the Abitibi and Yellowknife greenstone belts in Canada also have elevated concentrations of tellurium.

Telluride minerals are common in deposits in the Kirkland Lake and Red Lake districts of Ontario, as well as the Yellowknife mining district in Northwest Territories.

While much of the gold recovered from mines like Coeur Mining's Kensington operation in the Juneau Gold Belt of Southeast Alaska is hosted in telluride minerals, recovering the tellurium is not easy. 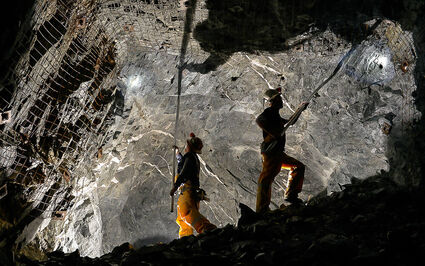 Coeur Mining's Kensington mine in Alaska hosts abundant telluride, but this tellurium mineral is tough to recover.

"Tellurium concentrations are highest in precious-metal-bearing deposits that contain abundant telluride minerals; these deposits, however, currently are not significant sources of tellurium because the ore-processing method to extract gold and silver is not amenable to tellurium recovery," the USGS reported in a 2018 report.

Tellurium, though, is seldom considered an economic byproduct from this type of mine globally, and only two mines on the planet produce this critical metalloid as a primary commodity.

So, the world will likely need to lean on porphyry copper mines for supplies of the tellurium that is expected to be needed to produce solar electricity in the coming years.

Considering that the World Bank estimates that the green energy transition alone will require roughly 1.1 trillion lb of copper over 25 years or an average of about 44 billion pounds per year, roughly equivalent to the total global copper consumption in 2020, there should be a lot more byproduct tellurium available.