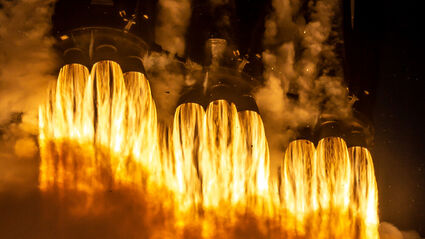 Extremely hard and with the highest melting point of all the elements, tungsten is often used in rocket engine nozzles.

Extremely hard and with the highest melting point of all the metals, tungsten's toughness is legendary. Like many of the other metals that have found their way onto critical mineral lists in Canada, Europe, and the United States, this durable metal is vulnerable to Chinese control.

"World tungsten supply was dominated by production in China and exports from China," the U.S. Geological Survey inked in its 2021 mineral commodities report.

It is estimated that mines in China accounted for roughly 82% of the 84,000 metric tons of global tungsten production during 2020.

Vietnam, Russia, Mongolia, and North Korea round out the top five global producers of this tough metal.

China also happens to be the world's largest consumer of tungsten. By dominating both the supply and demand side of tungsten markets, the Middle Kingdom has a strong hand when it comes to controlling pricing and global supply, something the country has been known to use to maintain and strengthen its control over many of the minerals and metals now considered critical.

"China's government regulated its tungsten industry by limiting the number of mining and export licenses, imposing quotas on concentrate production, and placing constraints on mining and processing," according to the USGS.

Due to this Chinese control, USGS ranks tungsten among rare earths, cobalt, graphite, platinum group metals, and tantalum as the minerals and metals most at risk for disruptions of supply to the U.S.

Despite the U.S. dependence on China and other countries for much of its tungsten supply, North America has significant unmined tungsten resources.

With no mines of its own to produce tungsten, the U.S. depends on recycling and imports to meet its needs for this metal with legendary strength and durability.

As a stopgap, the U.S. government has also been supplementing American tungsten supply out of its stockpiles. According to USGS data, roughly 4,100 metric tons of tungsten have been sold out of government stockpiles since 2017.

Nearly 60% of the tungsten consumed in the U.S. during 2019 was used to make the cemented tungsten carbide, a compound of roughly equal parts tungsten and carbon.

Nearly twice as strong as steel, tungsten carbide is often found on the working end of drill bits, saw blades, wear plates, and other items that require this compound's toughness to meet some of the most demanding conditions in the mining, oil and gas, construction, and metal-working industries.

Of all metals in pure form, tungsten has the highest melting point (6,192 degrees Fahrenheit). Because it retains its strength at these high temperatures, elemental tungsten is used in many high-temperature applications.

Heating elements, lightbulb filaments, rocket engine nozzles, and TIG (tungsten inert gas) welding are among the many applications that take advantage of tungsten's ability to hold up to heat.

Tungsten resources are plentiful in Canada and the U.S., especially the Rocky Mountain states and provinces, Alaska, Yukon, and Northwest Territories.

Mines along the Yukon-Northwest Territories border are past tungsten producers and are among the most promising projects for restoring a North American supply of this durable critical metal.

Mactung, which is about 100 miles northwest of Cantung, hosts 33 million metric tons indicated resource averaging 0.88% tungsten trioxide, making it one of the largest known undeveloped, high-grade tungsten-skarn deposits in the word.

Despite Mactung's world-class size and grade, along with being advanced well into permitting, North American Tungsten had to file for creditor protection before it could develop the mine that would have produced roughly 750,000 metric tons of tungsten per year, which would have been added to the 383,000 metric tons per year being produced at Cantung up until around 2015.

Under direction from the court-appointed monitor, North American Tungsten continues to undertake care and maintenance activities at Cantung in order to meet its regulatory requirements.

This work is being carried out in conjunction with federal officials and in consultation with Indigenous groups with asserted rights in the area.

Viable tungsten and copper reserves remain at the Cantung mine and the federal government is looking for a company to resume operations at the mine before the site is remediated and eventually closed.

At least six tungsten exploration projects are located just across the border in Canada's Yukon.

While there is not any tungsten produced in the U.S. today, this sturdy, industrial metal was historically mined in several Alaska locales to meet America's needs during both World Wars.

The gold-rich hills around Fairbanks, in the heart of Alaska's Interior, are one of the past-producing tungsten regions.

Over the ensuing three years, Stepovich and his crew dug more than 2,000 feet of underground workings and produced 300 tons of high-grade ore averaging 8% tungsten.

World War II rekindled interest in the tungsten around Fairbanks. In 1942, Cleary Hill Mines Co. leased the properties covering the tungsten lode from Stepovich and produced another 43,920 pounds, or nearly 22 tons, of tungsten trioxide.

All of Cleary Hill Mines' World War II production was sold to the Metals Reserve Company, a subsidiary of the federal government-backed Reconstruction Finance Corp. in Washington D.C.

Several other tungsten deposits and prospects were identified near Stepovich's discovery, including the Colbert lode, as well as the Yellow Pup and Schubert prospects.

Most of Alaska's Interior region is considered highly prospective for tungsten. This includes the Circle Mining District northeast of Fairbanks, where potentially "minable deposits of placer tin-tungsten minerals" have been identified, and the Livengood Mining District north of Fairbanks, where Freegold Ventures Ltd. has discovered intriguing quantities of tungsten alongside the copper, gold, and silver on its Shorty Creek property.

The Interior is not the only region of Alaska to produce tungsten in times of American need. During World War II, this critical industrial metal was also extracted from the zinc-lead-copper concentrates produced from the Riverside Mine in the Hyder District on the Southeast Alaska panhandle.

Located just across the border from Stewart, a British Columbia mining town at the southern tip of the Canadian province's famed Golden Triangle, the Hyder District experienced a boom of mining activity in the 1920s. While most mining in this region faded in the 1930s, the Riverside Mine was revived in 1940.

At least six prospects – Last Shot, Mountain View, Fish Creek, Blue Bird, Monarch, and Last Chance – have been identified across a 1.5- by three-mile area near the Riverside Mine, about 5.5 miles north of the town of Hyder.

The less than 100 current residents of Hyder embrace this disparity with the motto "the friendliest ghost town in Alaska."

During visits to Bear Mountain in the 1980s, U.S. Bureau of Mines geologists James Barker and R.C. Swainbank identified a 100-acre area of surface mineralization indicative of a large porphyritic molybdenum-tungsten deposit.

"I believe Bear Mountain to be likely the most important tungsten deposit in the U.S.," Barker, who spent much of his career doing critical mineral assessments for the former U.S. Bureau of Mines, told Data Mine North. 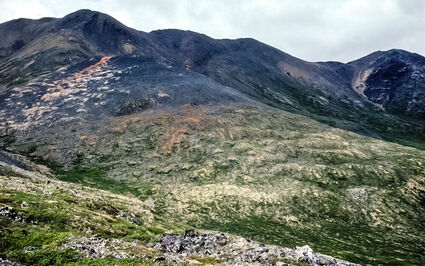 Bear Mountain in Northeast Alaska may host one of the largest tungsten deposits in the United States.

In addition to being in a remote corner of northeast Alaska, this potentially world-class tungsten-molybdenum deposit is situated within the Arctic National Wildlife Refuge, or ANWR, a 19.3-million-acre region set aside for wilderness and wildlife conservation.

While Bear Mountain tungsten, molybdenum, and niobium may be stored in an off-limits reserve, past producing mines in Alaska and Northwest Territories have answered North America's urgent call for tungsten in the past and have the potential to answer a similar call should a pressing need for the durable industrial metal rise again in the future.