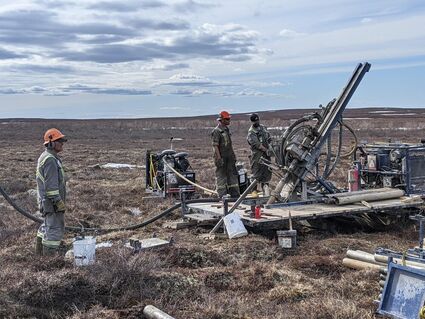 Roughly 35 kilometers (22 miles) southwest of the Ekati Mine and 40 kilometers (25 miles) west of the Diavik Mine, Loki is found in a region known for its rich diamond deposits. Presently, five diamond-bearing kimberlites have been discovered across the Loki project area.

In early 2021, North Arrow announced mobilization for an exploration program at Loki, utilizing Hornet reverse circulation drilling to test defined gravity targets in the north area of the project that ultimately led to no new discoveries.

Eastward, North Arrow announced in June the start of a C$5.6 million bulk sampling project in Nunavut, funded by co-owner Burgundy Diamond Mines. With a deal to earn 40% interest in the Naujaat project, the 2021 program completed over 2,000 metric tons from the shared Q1-4 kimberlite deposit, the largest and richest of at least eight kimberlite pipes North Arrow has identified so far at Naujaat.

Surprisingly, amongst the diamonds found in Q1-4, is a distinct population of high-value, fancy, yellow to orange-yellow stones.

Completed in August, the sampling was shipped to Saskatoon, Saskatchewan, for processing. Consisting of 2,500 bulk sample bags, the two companies hope to recover diamonds from the sample that confirm the size, distribution, and character of the "fancy-colored diamonds."

The sample began arriving at Saskatchewan Research Council in October. 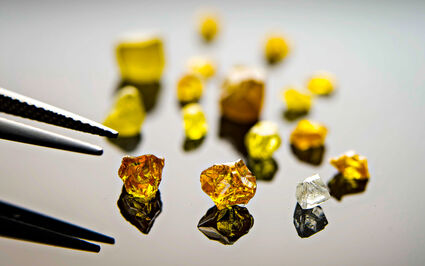 A collection of diamonds recovered from previous sampling of the Q1-4 kimberlite at the shared Naujaat project in Nunavut.

"The purpose of this sample is to confirm that a unique population of fancy yellow to orange yellow diamonds extend into coarser diamond sizes," said North Arrow Minerals President and CEO Ken Armstrong. "The quality of these diamonds will also be very important as we believe these fancy coloured diamonds will be a key value driver for potential future development of the Q1-4 deposit."

In the meantime, North Arrow has undertaken its own exploration at CSI, another Nunavut diamond project recently staked by the company.

North Arrow's current till sampling is intended to test new interpretations of surficial geology in the area, which could help identify a kimberlite source within the property.