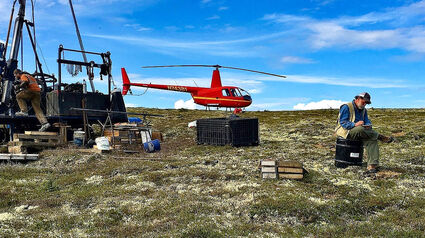 Western Alaska Copper & Gold is a private exploration company focused on the rich gold, silver, copper and zinc potential of the Illinois Creek Mining District located near the lower Yukon River about 65 miles southwest of the Galena and 120 miles north of the Donlin Gold Mine project.

This more than 26,000-acre land package blankets the past producing Illinois Creek gold-silver mine; Round Top, a porphyry copper-molybdenum-silver target; and Honker, a high-grade gold target.

Western Alaska Copper & Gold, which has been advancing exploration at Round Top and Honker, entered into an exploration and option agreement on the Illinois Creek Mine property with Piek Inc. during 2018.

Joe Piekenbrock, who has won multiple awards for his Alaska discoveries during his tenure with Novagold Resources Inc. and Trilogy Metals Inc., is the owner of Piek Inc. and now chief exploration officer for Western Alaska Copper & Gold.

Upon signing the agreement that consolidates the three projects in this district originally discovered by Anaconda Minerals in 1980, Western Alaska Copper & Gold has begun to investigate the potential of resuming mining at Illinois Creek, which produced roughly 130,000 ounces of gold and 500,000 oz of silver from an open-pit mine and heap leach recovery plant that operated from 1997 until 2003.

While the company that developed Illinois Creek ran into hardship early when gold prices dipped below US$300 per ounce, another firm leased the mine from the state of Alaska and was able to continue operations long enough to pay for the closure of the mine and put nearly US$850,000 in a fund to support monitoring of the site.

This abbreviated operation left plenty of gold and silver behind.

This does not count gold and silver remaining on the heap-leach pad, which could provide additional material for a restart of operations. Western Alaska Copper & Gold plans to test this material in 2020.

In the meantime, the company is having a preliminary economic assessment prepared for the resumption of mining at Illinois Creek.

The company also began environmental baseline studies that would be needed for permitting Illinois Creek and other mines in the district.

Honker, which lies about six miles northwest of Illinois Creek, is seen as a potential satellite source of high-grade gold ore for a future mine.

The main vein at Honker is about one to five meters thick and has been traced for about 800 meters along strike. This vein was historically drilled with 10 holes. While the recoveries from the historical drilling were poor, these holes encountered grades of up to 45 g/t gold.

Western Copper & Gold believes Honker could add 200,000 to 300,000 oz of gold available to a future mine at Illinois Creek and is planning a 10- to 12-hole program to investigate this potential.

In addition to its work associated with studying the viability of resuming mining at Illinois Creek, the company continued to explore the potential of its Round Top copper project. This year the company completed roughly 1,536 meters of infill drilling ahead of calculating a maiden resource for this emerging porphyry deposit.

Including this year's program, Western Alaska Copper & Gold has completed more than 9,900 meters of drilling into the Round Top porphyry. Once the assays from the 2019 program are complete, the company will have a maiden resource estimate calculated for this copper deposit.