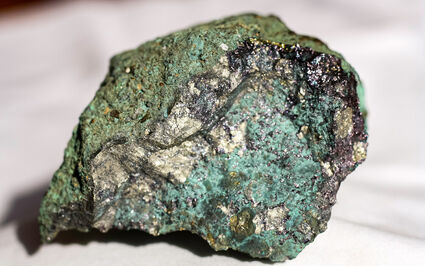 A sample of the copper- and cobalt-rich mineralization from the world-class Bornite deposit in Northwest Alaska.

Goldman Sachs' declaration that "copper is the new oil" may serve as a foreshadowing of Alaska's economic future, one that is not so heavily reliant on the revenues from petroleum flowing from the North Slope and leans more heavily on the state's rich endowment of precious, critical, and base metals.

The investment bank's suggestion that copper is to become the strategically most important commodity on Earth is due to the vital role the conductive metal plays in global ambitions to phase out fossil fuel-burning automobiles in favor of electric vehicles charged with lower-carbon energy.

With the 2050 climate goals of the Paris Agreement serving as a waypoint, the vast majority of automotive companies and global governments have set 2035 as the target for a complete transition to electric vehicle sales.

The World Bank Group estimates that more than 3 billion tons of minerals and metals will be required to manufacture the EVs and low-carbon electrical generation to stay under the 2-degree Celsius temperature increase limit set by this global accord. This includes an estimated 550 million tons of copper for wind turbines, solar panels, EVS, and the wiring to connect them over the next 25 years, which is roughly equivalent to the total copper mined by humankind since the dawn of the Bronze Age, some 5,000 years ago.

As the demand for the metals needed to build this low-carbon future rapidly grows, the need for the petroleum that has been the stalwart of Alaska's economy for the past half century is expected to decline.

"There is kind of the perfect storm brewing here," Contango ORE Inc. President and CEO Rick Van Nieuwenhuyse told Mining News. "If the long-term view is to reduce our dependence on oil and gas, Alaska needs to start planning on what that future is going to look like."

Fortunately, the state hosts a pipeline of world-class deposits of the minerals and metals needed to build the envisioned global low-carbon economy and diversify the state's economic future.

With the opening of the Gil Mine on Kinross Gold Corp.'s Fort Knox property north of Fairbanks, Alaska now has seven large-scale mines producing gold, silver, zinc, lead, and coal. While copper stands out as a metal not being produced, this current omission belies the massive stores of this energy metal found across the Last Frontier – and several projects are set to begin delivering "new oil" into global markets in the coming years.

In addition, several Alaska projects in various stages of exploration and development are poised to deliver cobalt, graphite, rare earths, and other minerals expected to see massive new demand powered by increasingly ambitious targets for the phasing out of fossil fuel-burning automobiles in favor of EVs charged with green energy.

As the urgency for precious, base, and energy metals grows, so too does the interest in Alaska's rich endowment of these metals.

While Alaska does not currently have a copper-producing mine, it is a past supplier of this critical electric conductor and has more than 30 million tons of the new oil in resources that are ready for delivery over the coming years and decades.

By far the largest deposit of copper in Alaska, and among the biggest in the world, is locked up in a long and drawn-out battle for regulatory approvals.

A preliminary economic assessment published by Northern Dynasty Minerals Ltd. in 2021 outlines plans for a mine at Pebble that would produce an average of 320 million lb of copper; 363,000 oz of gold; 15 million lb of molybdenum; 1.8 million oz of silver; and 12,000 kilograms of rhenium annually over an initial 20 years of mining.

"The significant metal production forecasts and robust financial estimates ... clearly suggest that Pebble is potentially more than just one of the greatest accumulations of copper and other strategic metals ever discovered on American soil," said Northern Dynasty Minerals President and CEO Ron Thiessen. "It's also a mineral resource that has the potential to sustain an environmentally sound and financially rewarding mining operation in the near-term, and become one of America's most important metals producers for decades to come."

Even so, it would take around 170 of these Pebbles to meet the World Bank's estimates on how much copper is demanded by the electric mobility and renewable energy sectors over roughly the same time frame.

Though Pebble is considered one of the largest undeveloped deposits of new oil on Earth, the project has been roiled in controversy due to its proximity to the Bristol Bay watershed and the world-class salmon fishery found there.

Proponents argue that a modern mine at Pebble could coexist with the fishery and deliver the copper and other metals the world needs. The opposition, however, says the Bristol Bay region is too unique to take a chance.

Toward the end of 2020, the U.S. Army Corps of Engineers denied the federal permits needed to move ahead with the development of a mine at Pebble expected to produce 5.74 billion lb of copper, 6.4 million oz of gold, 260 million lb of molybdenum, and 32 million oz of silver over a 20-year mine life.

Arguing that this decision is contrary to the law and the Army Corps' own findings in the final environmental impact statement, Pebble Limited Partnership, the Alaska-based Northern Dynasty subsidiary advancing this world-class deposit, has appealed the federal agency's record of decision.

"The FEIS found that the project can be developed without damage to the Bristol Bay fishery, a finding that was mostly ignored in the decision to deny Pebble a permit," said Pebble Partnership CEO John Shively.

Pebble is not the only advanced copper exploration project in Alaska that has healthy quantities of critical byproduct metals.

Not quite as large as Pebble but less controversial and much higher grade, the Arctic and Bornite deposits in the Ambler Mining District of Northwest Alaska host roughly 9 billion lb of copper, along with other base, precious, and critical minerals.

Ambler Metals LLC, a joint venture operating company equally owned by Trilogy Metals Inc. and South32 Ltd., is advancing the exploration, permitting, and future development of these and more than a dozen other copper-enriched projects across their Upper Kobuk Mineral Projects (UKMP).

Arctic, which is in the early stages of permitting, hosts roughly 2.5 billion lb of this copper.

Budgeted at US$27 million, the 2021 exploration program at UKMP focused primarily on mission-critical metallurgical, geotechnical, and condemnation drilling needed for further engineering and permitting a mine at Arctic.

When it comes to copper, the Bornite project, about 16 miles southwest of Arctic, hosts the largest deposit discovered so far at UKMP.

According to the most recent resource calculation, Bornite hosts roughly 6.4 billion lb of copper and 77 million lb of cobalt, a critical metal used in the lithium-ion batteries powering EVs and storing intermittent wind and solar electricity.

Bornite also carries at least two other critical minerals – germanium and gallium – though the concentrations and recoverability of these technology metals have yet to be determined.

Ambler Metals currently envisions Bornite as the second mine to be developed at UKMP.

Arctic, Bornite, and several other potential mines in the larger Ambler District will require road access to be economically viable. Such a road to be built by the Alaska Industrial Development and Export Authority (AIDEA) and paid for by tolls collected from the transport of concentrates over the private industrial access received major federal permit approvals with the mid-2021 joint record of decision issued by the U.S. Army Corps of Engineers and Bureau of Land Management.

In addition to being a major milestone for UKMP, the road approvals bolster other projects along the route, including the Sun VMS project being advanced by Valhalla Metals and several projects recently being explored by South32 and Trilogy independently of their JV work in the Ambler district.

"Given our relationships and significant technical experience within the Ambler Mining District, we decided to stake some prospective ground in our backyard," said Trilogy Metals President and CEO Tony Giardini said.

Besides Pebble and the Ambler District, Alaska hosts a pipeline of earlier staged projects that could deliver copper into global markets in the coming years.

Amongst the most advanced are the Palmer and Niblack VMS projects in Southeast Alaska.

Being advanced under a joint venture between Dowa Metals & Mining Alaska Ltd. and Constantine Metal Resources Ltd., the Palmer project at the north end of the Southeast Alaska Panhandle is an advanced mineral exploration project enriched with copper, zinc, silver, gold, and the critical mineral barite.

Budgeted at US$8.8 million, the 2021 program at Palmer primarily focused on geotechnical and environmental drilling to support a planned underground exploration program and feasibility-level studies for a future mine.

With new ideas brought by President and CEO Rob McLeod, Blackwolf Copper and Gold is expanding upon this resource with drilling that cut much wider intervals than previous modeling had predicted, with remarkably consistent polymetallic grades.

Based on 2021 drill results that exceeded expectations, McLeod said "Blackwolf has decided to initiate a significant upgrade of site facilities including camp, fuel storage, underground support and core processing that can accommodate greatly expanded programs at Niblack."

Three out of four holes testing coincident geophysical and geochemical anomalies outside the resource area cut native copper that indicates the high-grade copper at Caribou Dome could be much more prevalent than previously known.

"This discovery is a potential game-changer for PolarX because the same volcanic host rocks, along with multiple IP (geophysical) and geochemical targets, are widespread at Caribou Dome, meaning the exploration upside here is immense," said PolarX Managing Director Frazer Tabeart. "With copper being such an important metal for the green energy transition, we're increasingly well placed to play a role in this market."

In addition to testing potential expansion of the high-grade copper resource at Caribou Dome, the 2021 program included drilling into known massive sulfide lenses to collect fresh samples for metallurgical testing to support a scoping study on the potential of processing ore from Caribou Dome in combination with ore mined from the high-grade Zackly copper-gold project about 15 miles (nine kilometers) to the northeast. 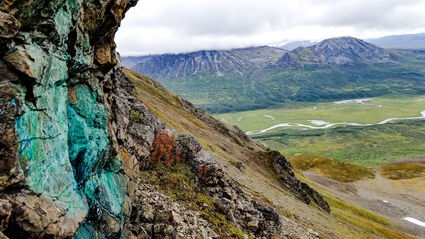 While smaller in terms of the potential to supply global demands, projects like Caribou Dome-Zackly, Niblack, and Palmer have the advantage of being nimble enough to potentially be near- to medium-term sources of copper for a world that is rapidly transitioning to electrified transportation and zero-carbon energy.

Kenorland Minerals Ltd.'s Tanacross project in eastern Alaska and the Round Top deposit on Western Alaska Minerals' Illinois Creek project in the western part of the state host earlier stage porphyry copper deposits that offer the potential to add to the reserves of new oil in Alaska over the longer term.